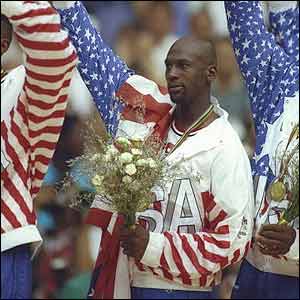 Tayshaun Prince left the game after playing only five minutes with an ankle injury.

And while I’m sure the brain-trust is concerned with Prince’s recovery...it’s not because they need him on this team to keep winning.

The US beat Brazil last night 113 to 76 and once again with the exception of a tight first quarter, just looked unstoppable. The US's defence locked Brazilian star Barbosa down and Lebron James and Carmello Anthony both scored 21 points to lead the US while Kobe Bryant added 20 of his own.

And what’s scarier than these numbers? Perhaps the numbers showing that James, Anthony and Bryant only played 24, 17 and 20 minutes respectively!

This team is downright chill-inducing and even with improved worldwide competition, I’m not sure this present incarnation of the "Dream Team" can be beat, even by the other world clubs they’ll eventually face like Spain and the full Argentina roster.

Seriously, one could argue that now with Kobe, and when Dwyane Wade returns to health, this squad is as talented as the original dream team.

That original team featuring the like of Bird, Jordan, Barkley, Stockton and Malone among others, is revered as being the best team ever assembled but I’m not quite convinced. Many of those players were entering the twilight of their respective careers and the international competition they faced just wasn’t the same calibre as today.

Maybe this play sums it up.

Against Canada, the US grabbed an offensive rebound but Dwight Howard was covered. Therefore Howard kicked it back out quickly to his perimeter team-mates forcing Canada to rotate across.

First Jason Kidd received the pass but was covered so it went across to Kobe.

Canada had Kobe D’ed up so he swung it to Carmello Anthony.
The Canadian defenders managed to get to Mello as well but then again the ball moved, this time to Lebron James in the corner with the shot clock about to run out.

And as soon as James received it he simply took aim, elevated, and fired, swishing it from beyond 3-point range beating the buzzer.

Those sort of offensive options are incredible, and I’d dare say would be an amazing test for the original "Dream Team." The Dream Team may have been wily veterans and amazing competitors, but Kobe, Lebron, Kidd and Anthony provide a mesmerizing array of talent, one that looks to be able to topple any opponent as well.

Defensively this current team simply doesn't let their opponents get good looks and for those who watched Saturday's Canada vs US match, it looked at times like Canada was just heaving up shots hoping to get an offensive rebound and not suffer a shot clock violation!

The oringal US Dream Team is steeped in basketball lore but let's look at the two side by side as of now to possibly give a better idea of what some of the position battles might have been:

On paper, I think both clubs are pretty even. I think the original Dream Team gets the edge in terms of "bigs," but the current team, especially with Wade’s eventual return, has the edge in guards.

In any event, it would be a battle for the ages...or a great PSIII idea.

Canada’s club by contrast, would be akin to the US’s maybe fourth or even fifth squad.

And that might be a tad on the generous side for Canada considering all of the comparative players are currently in the NBA while team Canada’s roster outside of Samuel Dalembert, not so much.

However that’s not to say that I won’t be sneaking away from work around noon today (12:30 to be exact) to watch the Canadian Club take on Uruguay. Uruguay will present Canada’s biggest test since Brazil (US doesn’t count) and feature some names fans will recognize like Esteban Batista. Uruguay sits behind only Argentina in Group A and now that the crossover rounds have begun, Canada needs to step it up to get that top five finish they need to be eligible to continue to compete for an Olympic spot.

Provided the Canadians hit their outside shots and continue to play an inside/outside style using Samuel Dalembert and Juan Mendez around the rim, I think Team Canada can escape with a hard-fought victory.

Those I’m obviously not so concerned about...