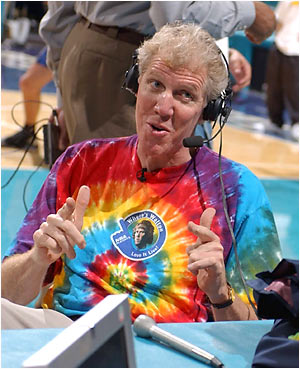 What can you say about Bill Walton?

He’s possibly the most aggravating voice in sports broadcasting today (along with Dickie V and ahem, maybe even the Swirsk.)
His endless stream of random observations, coupled with his laughable ignorance is enough to drive a viewer/listener to drink...

This afternoon’s Canada-US match was a perfect example of this as half of the time I found myself incredulous at some of Big Bill’s comments and laughing out loud at others.

"And let’s not forget Canada’s achievements outside of basketball. It was Canadians who invented the light bulb, the telephone, and the electron microscope!"

While listening to Walton I couldn’t decide whether I found him demeaning in terms of his constant "did you knows?" about our country or appealing due to his genuine love of various Canadian cultural idioms! I was stuck between being impressed by his seemingly sincere love for places like Banff and Whistler and baffled by his rantings on the US’s need to pass legislation to extract the precious minerals and ore in Arctic North!

But then again, this is the same guy who once uttered my favourite sportscaster quote of all time:

"If Larry Brown doesn’t win Coach of the Year for the Pacers, it will be the biggest travesty in the history of western civilization."

And I had to agree! I mean, Larry Brown leading a mediocre Pacers team in its "let’s play Jalen Rose at point guard" era definitely tops Vietnam, the Great Depression and World War I and II right?

So why am I dwelling on Walton? Well, let’s face it...for those who saw today’s slaughter, there’s not much else to say about Canada’s loss.

The Canadian squad was out-manned, out-talented, out-jumped, out-everything’ed as they fell 113 to 63. Olu Famutimi (whose name Walton kept pronouncing incorrectly as FamTUmi) lead the canucks with 17 points but he didn’t get much help from anyone else. And while head coach Leo Rautins called time-out after time-out, he just couldn’t stop the bleeding.
It was downright unfair truthfully.

Canada gave the US their all through the first quarter and actually kept things close creeping to within eight points at the start of quarter number two. However the US blew the doors off the hinges after that and even if Steve Nash, Jamaal Magloire and the late 80’s versions of Rick Fox and Bill Wennington, were on the squad, it hardly would have mattered.

This US team is just that good.

Even when Canada seemed to get stops, the US’s superior size and athletic ability enabled them to get offensive rebounds or steals on the ensuing possession (Canada turned the ball over 16 times) and they’d simply run the ball right back down
Canada’s collective throat.

In fact, for those who originally touted Brazil or Argentina as being tests for the US in this tournament, I now don’t even think that’s the case after seeing the States utter demolition of the teams they’ve played so far. Both the Brazilians and Argentinians are undermanned as is (almost their B teams) and this incarnation of the United States basketball juggernaut looks more determined than ever to reclaim their spot at the top of the world round-ball hierarchy.

And what does this mean for Canada?

Well, I didn’t expect the canucks to finish first or second, but with a solid first four games to sit at two and two, the club now gets tomorrow off before they find out their next test.

It’s a much needed day of rest for Leo Rautins’ crew who have played four games in four days and in the end could apparently play 10 in 12 days. In fact Rautins complained to FIFA officials about this and the scheduling in general which has been rather aggravating to many of the teams participating in this tournament. And as a further point, apparently team Canada’s pre-game warm-up time was cut to eight minutes prior to their first game.

Unfortunately it was revealed that Leo’s son Andy had told his Dad he "felt tight" prior to Team Canada’s first game and one has to wonder if the proper preparation time was granted, if Rautins Jr. would have suffered the horrific leg injury he did.

But enough speculation, Team Canada still has a number of games to play to ensure they grab one of the top five spots to keep their hopes alive for the next Olympics. There’s no reason they can’t do this as I’m still not convinced that Brazil (who is currently undefeated) is a better club.

No, Canada in my opinion is the third or fourth best club at this tournament and providing they can continue to show this, it bodes well for not only their final result at this tournament, but
also the future of the Canadian basketball program itself.

And then perhaps being regaled with tales of Neil Young and the discrepancies between the Canadian and US dollar, won’t be the only thing Bill Walton will have to comment on.