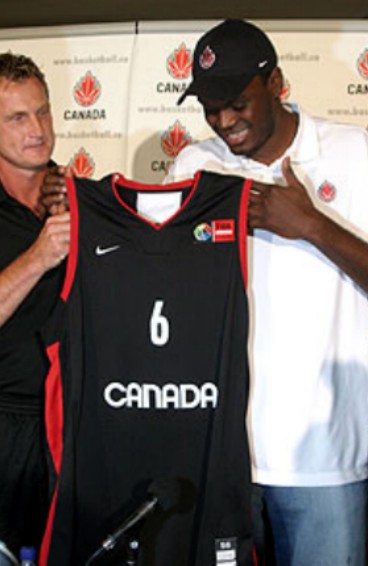 18 points, eight rebounds and five blocks and a defensive presence that altered many others.

Yes, last night the D in Dalembert was both for Dominant, Defense and Difference-maker.

The 76ers center was indeed the difference for Team Canada down the stretch as the Canadians eeked out an 80 to 73 win over Venezuela. The Canadian squad lead for almost the entire game but Venezuela pulled ahead with only minutes to go.

That’s when Samuel Dalembert took over with a huge
block, an "And 1" and some crucial free throws to put Canada up for good.

But Sammy D’s performance is only half the story.
Canada got huge play from point guard Jermaine Anderson who had 17 points and hit huge bucket after bucket, including going 3 of 5 from downtown. Team Canada’s lack of poise at the point guard position was one of its main problems against Brazil and Rautins even started Carl English at the 1 today to shake things up.

However the former Fordham star Anderson, brought his A game last night and one has to wonder if Wednesday night’s game against Brazil would have ended much differently if he had played the same way.

And on top of Anderson and Dalembert’s play, the
Canadian club got great contributions from some
unlikely sources like Olu Famutimi, Jesse Young and Levon Kendall. The team as a whole shot much better from beyond the arc and out-rebounded the Venezuelan club as well. Team Canada still struggled from the line shooting under 70 per cent but did a better job taking care of the ball and creating on offense.

Venezuela was lead by Hector Romero who was an absolute beast with 23 points. He scored in almost every manner possible from inside and out and was a handful for the Canadians all evening.

He simply didn't get enough help from his team-mates and in the end, Canada got contributions from more sources than Venezuela did.

However the one player still relatively MIA for Team Canada is Denham Brown. Brown started off hot coming off the bench for four quick points, but he only played seven minutes and just doesn’t seem comfortable in the offense. Carl English had a much better game offensively yesterday putting in 14 points on six of 13 shooting, however if Canada wants to at least keep things respectable against the US on Saturday, they
need Denham to rediscover his scoring and slashing
ability.

The interesting thing for me is that watching Denham, he looks to have lost all confidence in his game. One minute he’s draining shots off a screen, the next he’s throwing bone-headed passes or air-balling shots. And furthermore, he just doesn’t look to be communicating with his team-mates that well allowing opponents easy looks.
And this is especially surprising considering a lot of what he said when he spoke to the rest o the media and myself during his Raptors tryout prior to the draft.

Franchise: What parts of your game are you working on this summer?

Denham Brown: Well, I haven’t really started on my game yet, I’m just trying to get over this ankle injury and get back in game shape. They're pretty much seeing (at this camp) the first draft of what I can do. Throughout the past season they've seen what I have been doing; coming off screens, scoring off the dribble - I've pretty much been playing a complete game in the D League and overseas. You know this summer I'm still working on all those aspects, also defensively seeing the court, and just working on my personality, that's one of the big things.

Doug Smith: (Toronto Star) What parts of your personality, what do you mean?

DB: Just being a more friendly team-mate, encouraging guys to do well, you know not being more of an introverted player, but coming out, shaking team-mates hands, saying "good basket," everything like that.

DS: Were you too quiet before?

DS: Because I've heard some people say you might have been a little too introverted, keeping things in.

DB: You know that's something I've been working on, trying to come out of that shell and obviously over the past year I've been doing that so yeah, I've gotta keep that up.

That was a little over two months ago now that Denham spoke those words and unfortunately, I'm just not seeing that development personality-wise that he was alluding to. Of course I'm not there in Vegas, and am not around the team 24-7, however in the first two games, his body language on and off the court isn't great, his ball handling looks shoddy and I'm wondering if perhaps that ankle just isn't completely healed. At this point he hardly looks like the confident slasher and tough defender he was at UConn, regardless of the improved level of competition. Last night he allowed one of the Venezuelan players to drain a three right in his grill with the shot clock about to expire...not something that he ever would have permitted in college.

Next up for team Canada today is the Virgin Islands who were absolutely crushed by the US late last night. I'm expecting a solid win by our National squad to finish out tourney play at 2-2 with the inevitable loss to the US coming tomorrow.

I'm not sure if 2-2 will get Canada into the playoffs (it will depend on how Brazil finishes up I believe in terms of seeding in their group) and if not, that opening game loss to Brazil is going to sting even more as they not only lost a key player in Andy Rautins (who is now expected to miss all of next year at Syracuse) but also were dealt a serious blow to their Olympic hopes.

Finally, in associated Raptors news, Toronto doctors have not given Jorge Garbajosa medical clearance to play for the Spanish National Team next month. How this goes over in Spain is another story but for Raptor fans, I'm sure this is a bit reassuring considering the injury situations with Chris Bosh and Carlos Delfino. The last thing fans want is another player with possibly a lingering injury going into next season.