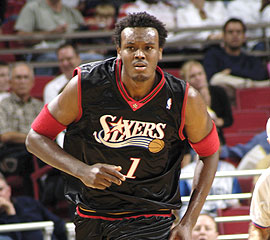 Before we get into the recap, our hearts here at the HQ go out to Andy Rautins, son of Team Canada Coach Leo Rautins, who suffered what looked to be a very serious knee injury only seconds after he checked into the game.

As of this post, no word on how severe the injury is but this HQ'er wouldn't be surprised to hear terms like "ACL," "MCL," and "Season-ending surgery" tossed around tomorrow when more details are brought to light.

The injury is triply damning as well. First of all from a Team Canada perspective, the loss of Rautins is a serious blow as in his absence, Carl English is really Canada's only dependable long-range threat. You could really notice his absence tonight as Team Canada shot a horrid 4 for 18 from beyond the arc. Rautins is also a solid rebounder an excellent scorer in general, both areas that were problems for the Canadians tonight.

Which brings me to the next point. Rautins was entering his third year at Syracuse and last season began to emerge as one of the go-to players for the Orangemen. He had a promising college career remaining and if this is injury is as bad as it looks, that may mean him having to red shirt for the year and he sadly may never be the same player.

And as his father's NBA and professional basketball career was cut short by injury, one hopes that history is not repeating itself. So finally, it must have been tough for Leo to continue coaching the team as surely in the back of his mind he was wondering how badly his son was hurt.

Perhaps the distraction explained Canada's loss...because for those who watched the game, it was like watching so many games from the 2005-2006 Raptors season.

The game was there for Team Canada's winning, but they just couldn't get over the hump.

Leandro Barbosa had 30 points and while only shot 35 per cent, his speed and ability changed the game and allowed his teammates some easy baskets.

On the Canadian side, there were some glaring issues right from the get-go starting with no Steve Nash.

Not that I expected Nash to play...but without a true point guard Team Canada's offence struggled with its motion. Jermaine Anderson was only one for six and without a scoring threat at the point, shooting guard Carl English was forced to play the 1.

English took some bad shots at times but you could hardly blame him in the first quarter because the Canadian squad simply had no one else to go to for buckets.

Also extremely apparent was Canada's lack of size. The team got out-rebounded 38 to 30 including 12 to six on the offensive glass. This killed Team Canada especially late in the game and one had to wonder just what "could have been" had Jamaal Magloire suited up.

As it was however, it was extremely nice to see Samuel Dalembert in the red and white. He got into early foul trouble but had a solid game finishing with 10 points, 10 rebounds and to blocks. My worry however is that he's being used too much for offensive purposes when in reality, he should simply be a put-back dunk type player at that end of the court.

In fact that's maybe the biggest thing that Team Canada needs to figure out before tomorrow's game against Venezuela. The Canadians' offence is going to have to come from somewhere and coach Rautins needs to decide if players like English and Denham Brown (who played only nine minutes) are going to play more of a facilitating or scoring role.

The real bright spot for me in this game was Juan Mendez. He outplayed Nene, (who still looks like he has a ways to go fundamentally) was Canada's top scorer with 18 points, and brought the energy and intensity this team needed to get back in the game in the second quarter. Kudos to coach Rautins for recognizing this and playing him starters minutes in the second half.

I expect to see a larger role for Mendez against Venezuela tomorrow and I'm hoping to see more of Denham Brown and Levon Kendall. If Team Canada wants a top five birth in this tournament and a win tomorrow, they need these two to step up in the worst way.

In fact the entire team needs to start hitting open looks if they want to get in the win column in this tournament. And unfortunately, http://www.thestar.com/Sports/article/248772Dave Hopla is no longer North of the border to help. Hopla will be taking a position with the Washington Wizards in as an assistant coach next season.

In other Raptors' news, it sounds like Toronto is going to deny Jorge Garbajosa permission to play with the Spanish team according to various sources. How this will affect relations remains to be seen but we'll know in the next few days what the final verdict on this front is.