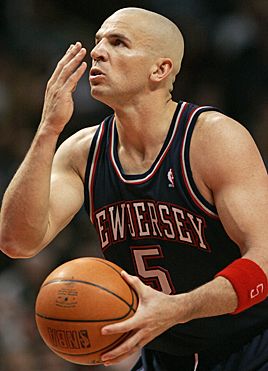 The disappointment of how last season ended has slowly worn off.

The embarrassment of seeing the team promote red while it was the Nets in that same colour alongside the memories of the Calderon pass that just missed and the lackluster performance of CB4 are all slowly fading into the background.

That’s the advantage of having such a young and upcoming team. There’s always next year to build on past successes. It’s a process, and much was done and experienced that will help the team grow and develop over the next few years.

That’s not exactly the case for the New Jersey Nets.

Grandfather time is not looking kindly on this squad, mostly because their leader Jason Kidd is now entering into his 14th NBA season. Each year that goes by without true post-season success (which they have not had since they made the Finals with K-Mart) is another missed opportunity. Unlike the Raps, the Nets window is slowly closing and this team did nothing this off-season to convince me that their season won’t end well before NBA Finals again.

For a team with a supposed "big-three" they have very little to show for it. Although the team has experienced solid regular season success they are rarely considered a true threat to win the East. Of course none of this can fall on the shoulders of aforementioned Kidd. Love him or hate him he is still a top flight PG in the league despite his age. Although no-one is expecting Kidd to slow down we are not far off from his inevitable fall from grace. It won’t be this season though as he is currently playing with Team USA and will undoubtedly enter the season in great shape. The problem for the Nets is determining HOW MUCH Kidd has left.

(As an aside, this writer would love to be watching Kidd and Kobe playing together in Vegas (See: http://www.usatoday.com/sports/olympics/2007-08-14-basketball-leadership_N.htm). If these two develop a great chemistry, given "Mamba’s" off-season blow-ups (Bynum better become a GREAT player) this could be cause for fireworks in La-La Land.)

Kidd can hit the big shot and makes the game easy for his teammates. There’s no question that without Kidd playing at his consistently high level this team would be in a world of trouble.

So where does the blame rest?

There is no real point in talking about Vince other than to say he fills the stat sheet but disappears at clutch times and his lack of love and passion for the game will inevitably be his and the Nets' downfall. Re-signing him is a big mistake if the goal is to win championships.

Richard Jefferson is a solid player but is somewhat overrated. He has had difficulty staying healthy two of the past three seasons and although a good player, he is not a great one and more a product of the system. RJ’s value will never be much higher than it is now and it shocks me that Rodd Thorn has not made a bigger push to move him for someone like Jermaine O’Neal. As good as RJ is in the Nets system, their front-court really needs an established athletic big-man.

Speaking of big-men, there are a number of questions facing the Nets and their front-court this season. The 4 and 5 positions have been a bit of a revolving door since K-Mart left town. Aaron Williams, Mikki Moore, Nenad Krstic, Jason Collins and now Sean Williams and Jamaal Magloire to name a few. The Nets are hoping that Sean Williams can help replace the now departed Mikki Moore. An athletic freak Williams will have no issue running the floor and making some spectacular blocks. There are a ton of questions about him and his game however. How will he adjust to the NY life-style? Does he have any offensive game to speak of? Can he stay out of foul trouble and trouble in general? Can he play disciplined ball? Many people look at summer league as a time to see not who "can" play, but who "can’t." If that’s true unfortunately for the Nets, Williams currently falls under the latter more so than the former and it would be a stretch to think he will contribute much this season. His play this summer was sporadic and foul filled.

The Nets also signed the "Big Cat" to help boost their front-court. This move is baffling to say the least. For a team that loves to run, get in the open court and push the ball, this signing makes about as much sense as Troy Hudson making another Rap album (See: http://slamonline.com/online/2007/08/troy-hudson-sucks-at-rap/). Unlike Moore who is a human pogo-stick and thrives in the up-beat tempo, Magloire is your typical big man who thrives in a slow half-court set. I am highly skeptical about what sort of success he will have in the swamp and seeing him regain his All-Star form is highly unlikely.

The Nets will however get a shot in the arm from the return of Nenad Krstic (the Nets X-Factor for this season) and an off-season of development from their younger players. Krstic was well on his way to become a solid player prior to his injury and if he comes back fully healthy it will be a great addition to the squad. Marcus Williams will be looking to take another step forward as well the other UCONN product Josh Boone.

All that said, the long and short of it is that as long as Jason Kidd is in the swamp and playing at a high level this New Jersey team will push for the Atlantic Division title. The games between them and the Raps should be hard fought and the HQ is looking forward to upcoming battles at the PG position. Williams vs. Ford is something Raps fans should get used to seeing for years to come.

Perhaps the biggest difference between the Nets-Raps match-ups this season as compared to seasons past is that Mo Pete will no longer have the responsibility of containing Vince. The "slap" and the history between those two has been well documented and watching these two battle it out will be missed. The departure of Mo may actually be felt the most in the Nets-Raps games then any other and once again play at the 3 position is the biggest concern. Much like the Celtics and the 76ers, this squad has strong players manning the 3, be it Vince or Jefferson or to a lesser degree Nachbar. Finding someone on the current Raps roster willing to step-up and take on this challenge is key to the Raps securing W’s against this Atlantic Division foe and improving on last season's 2-2 record.

On a whole the Nets again look like a strong team both player and coach wise. Lawrence Frank was at his best during the Raps-Nets playoff series and he recently added Orlando’s ex-head coach Brian Hill to the staff. Expect the Nets to push the Raps this season in an attempt to regain their Atlantic Division crown. Provided they are healthy there is no reason the Nets shouldn’t be in the mix again. Just don’t expect much post-season success.