Share All sharing options for: Media Watch for August 17, 2007 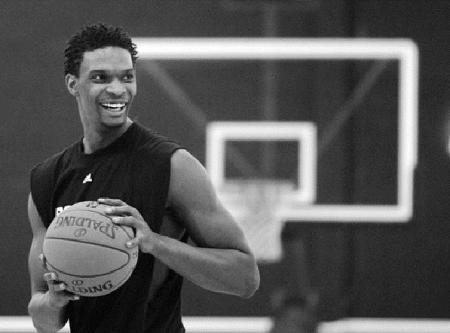 The last thing I wanted to start a Media Watch off with as we near summer’s end was Chris Bosh and injury worries.

However it appears that the plantar fasciitis that Bosh suffered from last season is still lingering and as a result Bosh is leaving the camp and will no longer be part of Team USA’s summer plans.

There are of course a few ways to look at this.

As one of our readers pointed out, there may be some pride involved as Amare Stoudamire is slated to be the starting 4/5 on the squad and perhaps the injury concern is being overblown to hide this rationale for leaving the camp.

And on the other side of things, perhaps Bosh is still injured and this is a precautionary measure to ensure he’s 100 per cent come regular season.

I tend to think it’s the latter and am concerned that perhaps he needs more than the suggested three weeks to fully heal. The last thing the Raptors need is for this condition to flare up at various points in the season and even if resting CB4 meant that the Raptors would start the season without him, I’d be fine with that. Bosh is just starting to touch on some of his potential and a nagging injury like that would put a serious damper on his development. The Raptors need Bosh at the top of his game to continue to help this team's growth and developement this coming season...especially as his job just got a bit tougher with the conference additions of Zach Randolph, Rashard Lewis oh...and Kevin Garnett.

On a more positive injury note, it sounds like Jorge Garbajosa is doing really well with his own rehabilitation. As our "foreign correspondent" Sergi P mentioned recently, Garbo intends to play for the Spanish National team however it’s yet to be seen whether he will in fact be able to go.

And as the Toronto Star’s Doug Smith mentioned a few days ago, it seems that the Raptors and the Spanish National team have differing views of how "ready" Garbajosa is.

The Spanish basketball federation announced that Jorge Garbajosa is set to join the national team. However Raptors brass have stated that "at this point no official determination has been made other than he (Garbajosa) has not yet been cleared by our medical team to participate in full basketball activity..."

Similarly to Chris Bosh, while I’d love for Jorge to be able to represent his country and defend their last international title, I also want what’s best for him long-term and the Raptors as well. Many fans remember all too well how Grant Hill decided to play through an ankle injury for the Pistons in the playoffs and how that eventually impacted his career.

And for an international comparison’s sake, what about David Beckham?

Beckham is no spring chicken and with his leg injury looking worse than advertised, it’s quite possible he may never have the sort of impact the LA Galaxy envisioned when they paid him so handsomely to come stateside. Beckham remains committed to playing for his own national program and if he’s not fully healed it may effectively put a quick end to his MLS aspirations.

The last thing Raptors’ fans want is a similar situation with Jorge Garbajosa.

On a final note, it looks like PJ Tucker has a job overseas next season. Tucker has signed with Hapoel Holon of the Israeli League and will look to hone his skills there in anticipation of a return to the NBA one day.

We never managed to nail down that interview with him but we wish him all the best.

UPDATE - Looks like more injury news unfortunately as Carlos Delfino has injured his knee and is no sure thing to play for Argentina. This is the risk with international play of course and the hope is that the knee problem is more a tweak than anything more serious.