Share All sharing options for: Scouting the Competition - Philadelphia 76ers 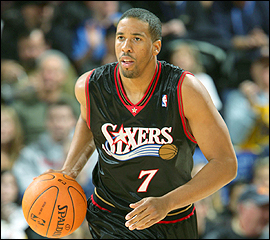 The first "Scouting the Competition" piece resulted in a lively debate over the best "big three" currently in the NBA and until this season gets underway, or for that matter wraps up, it is hard to tell. The argument did solidify the point that the Atlantic divisions teams are no longer guaranteed wins, or close to it and we can all agree that the KG-Bosh match-up is one to loom forward to.


When KG was dealt, Minnesota now finds themselves in a similar situation to that of the Philadelphia 76ers. Having dealt their big-draw in Allen Iverson, the 76ers are rebuilding and are focused on developing their young talent, and their young stars.


Looking at the 76ers roster, young is definitely the optimal word and they have only added to it this off-season. In fact, they currently list only three guys born before 1981 (Alan Henderson, Andre Miller and Kevin Ollie) while their number one pick Thaddeus Young was born in 1988. That makes this author feel very OLD.


The center piece for this squad is again someone with the initials AI. Raps fans have always looked at Andre Iguodala and thought about what could have been. It’s become harder and harder for Raps fans as Iggy has taken the departure of Iverson and made the most of it. The 6'6" SG/SF put up some ridiculous numbers last season averaging 18.3 ppg, 5.7 rebounds, 5.7 assists and 2 steals while shooting solid percentages from the floor, the line and beyond the arc. He really is becoming the complete package and with his athleticism there really is no ceiling.


The 76ers bench has oodles of talent outside of AI as well. Young guys like new Canadian National Team member Sam Dalembert, Rodney Carney, Willie Green, Kyle Korver along with the aforementioned Young and fellow rookie Jason Smith help give Sixers fans hope for the future. Of course just because they are young doesn’t mean there are no expectations. This team went on a little bit of a roll, going 15 and 9 over the last two months of the season and there is hope that this team could really surprise. Many people have debated whether this team is as good as they showed late last season. Was it teams looking past them? Schedule? Or maybe guys just playing a little harder now that AI was gone?


The question is really whether they can capture lightening in a bottle and start this season off much like they ended last. Much like Colangelo, Billy King didn’t spend a lot of time making big changes. Like the Raps, the talent is there. Given time to grow, this team could develop into a solid squad in the East. Although arguably a year or maybe even two behind the Raps in terms of development, King is allowing the young guys to grow and play together and you have to like the blueprint he is using. The reason why I believe this rebuilding plan in Philadelphia will be more successful than say what is happening in Atlanta, and prior to the KG trade Boston, really boils down to one player...Andre Miller.


Even when teams are rebuilding they need a veteran presence. Veterans are important both on and off the court. Not only can they help the young guys get accustomed to life not only on the road, but they can simply help them adjust to being an NBA player. On the court veterans can also provide a steady hand and can help teach. Andre Miller is the perfect guy for that role, in particular in a situation where so much of the young talent is on the wing and in the paint.


Although in a rebuilding stage Miller has never expressed any desire to leave the 76ers. This is a breath of fresh air in light of this new found craze that seems to have overtaken professional sport being that all players at a certain stage have a RIGHT to a championship rather than a right to EARN a championship. Miller is a great floor general, a pass first PG and arguably the perfect PG for a team that has shooters, slashers and finishers. His veteran presence at the 1 will be the main reason why the rebuilding project in 76er land has a much higher probability of success then in those cities who currently rely on guys like Tyronn Lue, Sebastian Telfair, Anthony Johnson and others to lead their young guns.


So what does it mean for the Raps? In the short term the Raps should be able to chalk-up more wins than losses against this team. Long term it looks like Billy King may actually be putting something together. Perhaps the biggest thing for the Raps will be not looking past this Atlantic Division rival. Very little has been said about this squad and outside the City of Brotherly Love there is little pressure to succeed. That being said many times it is the teams that are under the radar that can cause the biggest problems.


If the 76ers do gel as a unit their athleticism could give a lot of teams trouble. Fortunately for the Raps they not only have the athleticism to match, but as a team I would argue they have a much higher basketball IQ simply as a result of playing time and experience. Much like the Celtics, the biggest difficulty for the Raps will be finding someone to guard the three position and in this case AI. As we continue the "Scouting the Competition" series it is becoming more and more apparent how essential it is for someone on the current Raps roster to step-up at the SF position.


On paper the biggest advantage the Raps have over the 76ers is up front. Save for Dalembert, this team is rail thin and shy of anything even close to resembling a "banger". That’s not to say the Raps are loaded up front with big tough guys, but guys like Humphries, Garbo (who now looks ready to play at the European Championships) and even Rasho should be able to help the Raps dominate that part of the game. What works in theory may not work in practice though as the 76ers out-rebounded the Raps in 3 of 4 contests last season. If the Raps can dominate this part of the game there is no reason why the Dinos cannot improve on last season's record (3-1) against this divisional rival.


Update** In case you have not noticed we are taking the off-season to help update the site and although much of the work is going on in the "back-end" many of you will have seen small new features including an RSS feed. Take the time to click on the feedburner link on the right hand side where you can subscribe for RapsHQ email updates or add the HQ to your RSS reader. When we post something new (obviously more frequently than during the off-season) you will get an email update telling you what’s been added. Lots more coming and we appreciate you guys sticking with us during the dog days of summer!