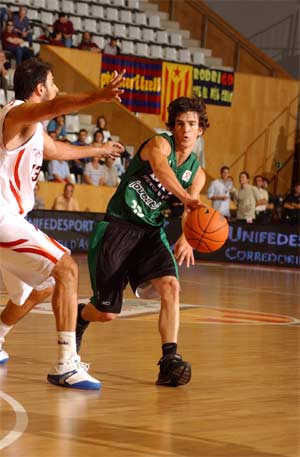 First off, a big shout to Sergi P for hooking us up with some much needed updates. The Raptors don’t start their training camp for approximately another two months and besides re-runs of the 2000 All-Star Game on RaptorsTV, news in Raptorland is scarce.

Therefore it’s great to get some insight from across the pond. Take it away Sergi!

First of course the Juan Carlos Navarro situation has been getting a lot of attention after F.C.Barcelona agreed to lower his buyout to facilitate his long-time wish of playing in the NBA. After a very tough negotiation with the Wizards, the Grizzlies managed to get his rights in exchange for a first-round draft pick. It’s yet to be determined whether or not it will be lottery protected but in any event, it marks the end of Navarro’s tenure with the Wiz.

The player is also giving up a lot of money in order to fulfill his dream, he will have to pay from his own pocket the buyout which is about $2 million (grizzlies are only allowed to pay $500.000 per league rules) and he is only signing for $1 million and one year, making a big gamble that he will perform so well that he can earn a much bigger salary in free agency next year.

Navarro has long been considered the best SG playing in Europe, he is a very talented offensive player who can score in many ways, particularly with a very quick one on one drive which he usually finishes with a "Bomba", his trademark one-handed lay-up from 4-5 feet. If the Grizzlies can give him a regular 30-35 minutes confidence he is poised to have an impact similar to that of Anthony Parker in the Raptors.

A Garbajosa update which I posted in a comment to the HQ last week: his recovery is going very very well, the limited time remaining is the only real obstacle at this point for him to make the Euro Championships. I'd estimate he now has a 75% chance to make the Spanish team, but being a starter and playing significant minutes as usual will be more difficult, I'd say 40% on that one.

As for the European Championship coming up in September, there is an excellent preview (in English) along with the Olympic qualifiers over at The Painted Area which I wholeheartedly recommend.

There's still one month to go for the Eurobasket, but in the meantime there is a nice appetizer for us hoops junkies from overseas: the European under-18 championships which are also being played in Spain.

Normally this tournament would fly under the radar even for the Spanish sports media, but the presence of superstar-to-be 16 year old Ricky
Rubio means we are even getting some games broadcasted in a national TV channel! Of course, this is an excellent chance for me to introduce
Ricky to those of you not in the know of the generally considered top prospect in European basketball (some even say the best European prospect ever). A very good introduction can be found in a nice article from SLAM's Lang Whitaker aptly named "The Best Basketball Player You've Never Heard Of."

I found video of the incredible half-court buzzer beater from the Under-16 World Championships final to send the game into overtime.

He ended that double-OT game with 51 points, 24 rebounds, 12 steals and seven assists, leading Spain to win the championship. (Yeah it's an under-16 game, but still one of the greatest performances I have ever seen.) He was already considered a top prospect *BEFORE* this game (of course he became kind of a legend afterwards).

Finally, tickets are now on sale for the preseason NBA Europe Live Tour game that the Raptors will play in Madrid on October 11th against reigning Spanish champs Real Madrid. This is probably not the best preseason training possible for the Raps, but it should be a lot of fun for us Spanish fans to watch. I expect the game to be very close, of course Real Madrid would not be a match for a Raps team in full form, but considering they will have just been training for a few days they will have a tough rival in Real Madrid's very balanced and team-play oriented 10-man rotation."