Drafting for Position aka Why We Took Hoffa

Share All sharing options for: Drafting for Position aka Why We Took Hoffa 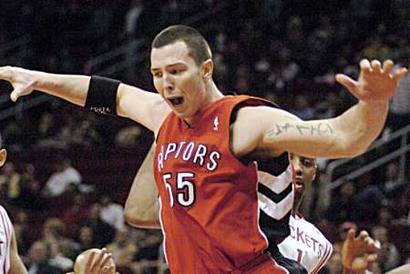 "With the eighth pick in the 2004 NBA Draft, the Toronto Raptors select Rafael Araujo, from BYU…"

Yep, I can still here the words ringing in my ears.

On that fateful day almost three summers ago, the Raptors’ brass decided to do something that many a GM has done in past NBA drafts. The Raps drafted a player who seemed to fit a hole in their lineup, regardless of the fact that he may not have been the most talented remaining available player.

We know what happened next.

From the cries of "stiff" to the intense scrutiny the then current regime placed themselves under, the decision to select "Hoffa" was in the end the wrong one. Rob Babcock and co. passed on numerous other players that would have looked pretty good in a Raptors jersey right about now, namely Andre Iguodala, Andris Biedrins, Josh Smith, JR Smith, Dorell Wright, Delonte West, Tony Allen and Kevin Martin. In fact, even though Chris Bosh was firmly entrenched at the 4 and we now have a great situation at the 1, you could argue that Al Jefferson, Beno Udrih and Jameer Nelson would have all made more sense than Hoffa as selections as well.

So why was Araujo the unfortunate "reach" at the eighth spot?

Well for one, Araujo was heralded as being the most "NBA-ready" of the draft and was supposed to be able to step in and help Vince Carter and co immediately. And in addition to this, and perhaps more importantly, Hoffa would be someone to plug right in at center to fill a gap that had existed since Antonio Davis had been shipped to Chicago.

Unfortunately for us Raptor fans, this logic was incredibly flawed as the former BYU product struggled in his role and while he was a tireless worker, by the middle of his second season, it seemed pretty obvious that he was just not going to amount to a starting NBA center for Toronto.

The interesting thing about this situation, is that it happens year after year.

GM’s fall in love with various players because of their perceived "fit" with a prospective club, and time and time again, this has come back to haunt them.

The most famous case of this probably is Portland passing on Michael Jordan to draft Sam Bowie because they already had a player at MJ’s position. And what do you know, Portland, with the top pick overall, is in a similar position this year. Do you they take Greg Oden, the player who seems to be the consensus top pick due to his overall abilities and size? Or do they draft Kevin Durant as they already have LaMarcus Aldridge playing Oden’s position?

Right now it looks like Portland can do no wrong in terms of the selection they make...but I’m sure when the Trailblazers selected Bowie back in 1984, they were thinking the same thing.

Although the Raptors don’t have a pick so far in this year’s draft, it’s interesting to note that Toronto could be facing a similar situation. The team has obvious needs at the small forward position and with numerous prospects like Jeff Green, Corey Brewer, Julian Wright, Al Thornton, Nick Young, Rudy Fernandez and Marcus Williams seemingly good "fits" at the 3, will we see Colangelo target one of these players? There’s still no word as to whether or not the Raptors will schedule any workouts leading up to the draft so perhaps instead, Toronto will simply have a few teams on the phone who may be willing to give up a pick, and if a player they like falls to one of those spots, they’ll make a trade regardless of if the player is true "3."

In fact, based on Colangelo’s draft history, I’m not sure he really cares about drafting for position and simply tries to find the best player available. Shawn Marion seemed like a reach back in 1999 when he was taken ninth overall. Marion was an incredible athlete out of UNLV but hardly seemed like a basketball player thanks to his wonky looking shot. And even with Marion at the 4, that didn’t stop BC from grabbing Amare three years later.

And I think that’s what makes this draft so interesting from a Toronto fan’s perspective as we have no idea just what BC is going to do. In previous years there were some indications of which direction the team could go with their selection but with none this year, Raptors fans find themselves totally in the dark.

I am of course taking comfort in the fact that BC is at the helm in making any draft decisions. In the past he’s shown a true ability to mine talent from the process and doesn’t seem to be one to put an over-emphasis on workouts or pre-draft testing. As Draftexpress correctly pointed out in their recent article on the topic, both things (especially the NFL combine-like tests) are given too much weight as we’ve seen tons of these tests’ top athletes like Troy Bell, Kirk Snyder and ahem...Joey Graham, flounder when actually thrust into real NBA game situations.

Yes, the Raptors could use some help at the 3 spot...but not if it means reaching on someone who simply seems to be a "good fit."