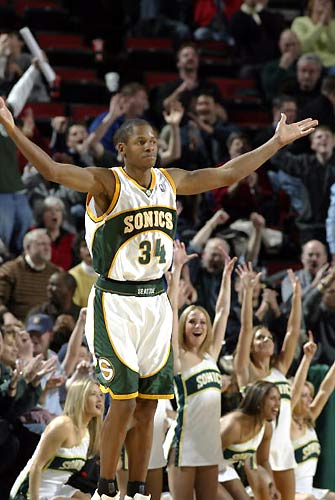 Well, so much for Derrick Byars, Rudy Fernandez and everyone else we were hoping to see fall into the Raptors' lap.

This pick has Godfather Gherrardini's prints all over it and for now we'll leave it at that. Printezis is a big kid, a banger and hopefully more of an option down the road than the likes of Ramon VanDerHare...

I was intrigued by some of the moves made, especially the three big trades that went down, and I did feel some teams reached a bit on a few players.

However I think tonight's action is really going to setup some interesting moves for the rest of the summer.

No KG or Amare trade.

And now with J Rich out of Golden State, both Pietrus and Barnes might be off limits for the Raps.

So in any event, I think this free-agency period still could prove to be quite interesting.

The big winners on the night in my books?

While I still think Portland should have taken Durant at 1 and hopefully the buy-out Steve Francis, I do like the complete overhaul the team has made in the past year. However if I'm Colangelo I'm a bit sour that Pritchard seems to be biting my style grabbing solid players who should provide good chemistry...not to mention Spanish National team-mates...

The other big winners in my books? Right off the bat I like the moves Detroit, Atlanta and even Utah made.

As for the Knicks? Don't get me started. I know Randolph is a 20-10 guy in the WEST...but I fail to see how he and Eddy Curry are going to co-exist down low as they have identical games and both play tissue thin defence. Maybe it works for a bit, but eventually I foresee major issues. Didn't Isiah learn from trying to play Marbury and Francis in the same backcourt? I guess he wants to try it now in the front-court.

Finally, a big shout to all who came down to hang out at Harbour tonight for the draft. Good times and it was great meeting everyone. Sure I took a lot of harrassment for McRoberts fall from grace, but I gotta say, he's now become the poster-boy for why a player should come out when his stock is high. (You could maybe say the same thing about Noah to a lessor degree.) Joshey went from a top seven pick to out of the lottery and I still don't understand why after a so-so season and such a deep draft, he didn't just go back for another year at Duke...

And the countdown begins only 364 until the 2008 NBA Draft where the Raps should undoubtedly be more active. That's not of course to say the evening wasn't entertaining. If you watched you did indeed see one of the, if not the deepest drafts in the past decade in my opinion. So even though the Raps were not very active there was lots to talk about.

But where do you begin?

One of the first things that must be discussed is the Jason Richardson trade.

(Even typing that pains me.)

My favourite player since his days at Michigan St. and my Golden State Warriors jersey has now lost much of its sheen. Not to mention the thought of getting a Charlotte Bobcats jersey just
to support my boy hurts. That being said you have to love the move by Charlotte, and when you accompany it with the drafting of Jared Dudley this team improved in a hurry. The result for Gerald Wallace will be up for debate, but the details of this trade as I write this still need to be worked out. By acquiring J Rich, Charlotte got a great player and suddenly Mr. Johnson the owner is showing a willingness to open the pocket-book. Don't tell me this doesn't have Jordan's prints all over it.

Of course Charlotte wasn't the only team to improve. Portland has really turned the corner thanks to back-to-back active drafts. In fact sign Kevin Prtichard up for exec of the year in the not so distant future. Last year Portland made a variety of moves to acquire this year's ROY, as well as LaMarcus Aldridge, Sergio Rodriguez and Joel Freeland. This year? Well obviously the highlight was the drafting of Greg Oden but Pritchard was far from done. The biggest move was shipping out Zack Randolph, Dan Dickau and former Rap Fred Jones for Channing Frye and Steve Francis (who supposedly they will buy out.)

Frye, Aldridge and Oden make for the youngest and one of the most talented frontcourts for years to come. Portland also bought a pick from the Suns and took Rudy Fernandez, traded for Petteri Koponen, and took Derrick Byers, Taurean Green, Demetris Nichols and Josh McRoberts in the second round. Loving all of the second round picks and I have no doubt that one will greatly surprise. What is obvious though is that the former Dukie McRoberts was clearly listening to the wrong people and will start his career looking up from the bottom of a depth chart filled with younger better players.

One of the most surprising thing was the fact that Atlanta made no moves on this evening. After all of the discussion surrounding the number 3 and 11 picks Atlanta stayed the course and took Al Horford and Acie Law IV. Gotta love these picks. Now if they could move a Marvin Williams, Sheldon Williams or Josh Childress for a true centre or another PG then they may have something going.

Now on a whole there were less surprises then in years past. That being said there were some serious head scratchers. Right off the bat you have to wonder what teams like Houston and Milwaukee are doing.

The former took and undersized PG, which would be fine had they not just traded for Mike James and already have Rafer Alston. There must be another move on the horizon.

The Bucks are a different story.

Apparently following the advice of his father Mr. Harris decided Yi Jianlian was the best player available despite having essentially been told by the Chinese star's reps to stay away.
Having been shut out of Yi's workouts this is a strange one. Based on skill set and what the Bucks need it is a great pick but there is a whole lot more to Yi then just his on the court talents. If I'm the Bucks though I stick to my guns. This guy has no business deciding where he should go. What's the
difference between this and Steve Francis? The strangest part of this story remains the fact that GM Harris did not see this guy workout.

One of the picks you had to love was the Clippers taking Al Thornton. This guy attacks the rack. Are they sending a message to Maggette? Nevertheless until Livingston comes back, if at all, this team has some gaping holes.

A few glaring questions definitely remain. Is the drafting of
Crittenton, Yue and Gasol enough to appease Kobe? Is Garnett coming or going? What about Jermaine O'Neal? Was Colangelo working the phones and if so was anything else close? Did anyone get a bigger steal than the Spurs with Splitter? How is Noah going to get the Bulls over the hump? Can you win playing all SF's because apparently that's what they are going to try in Seattle?

You'll note we did not discuss the Atlantic division teams. We will be discussing in the coming days (or more like debating) the improvement in the Atlantic. The Knicks acquisition of Randolph, the Celtics acquisition of Ray Allen and Phili adding some nice new pieces are all noteworthy for Raps fans and topics we'll be starting to break down this weekend...