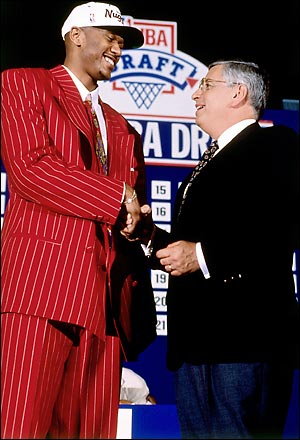 In less than 48 hours the Greg Oden/Kevin Durant era of the NBA will begin.

Will the Raptors be involved in Thursday night's activities? Right now it doesn't look to be the case and from today's Steve Simmons piece in the Toronto Sun, it doesn't look like there's much weight to the "Calderon for a pick" rumours either.

Perhaps the Raps snag a second-rounder but based on Colangelo's recent comments, it looks like the Legomaster and his war room team (what I wouldn't pay to be in that chamber of discussion tomorrow night) will play the role of vultures and wait to see what transpires.

In any event, with Howland in Halifax for a wedding, I'll be holding down the fort at Harbour Sports Grille here in Toronto, located at 10 Yonge Street.

It's become the HQ bar of choice for anything basketball related in recent year (what other bar would allow us to watch re-runs of Denver vs. North Texas DII ball on the big screen??) and we've booked off the couched area for the big event.

We'll also be joined by Ryan from Hoopsaddict.com who we've collaborated with in the past, and Chris Clarke from The End of the Bench. I'll be the one rocking the HQ black and white T-Shirt and yelling at Danny Ainge. All are welcome to come down and partake of some beverages, food and Isiah Thomas and Stephen A. Smith heckling...

It's the NBA Draft folks, my favourite time of the year and even if Toronto doesn't make a move, it beats the hell out of the NHL Draft any day!