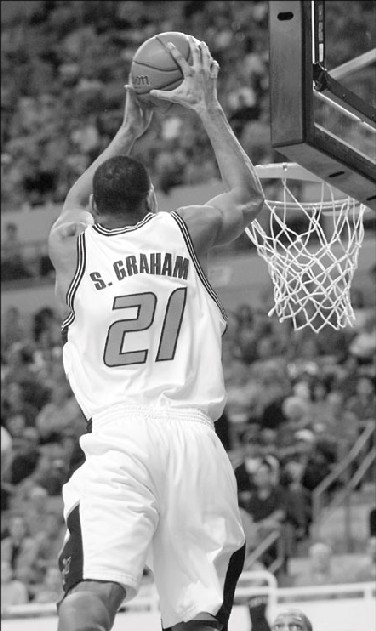 Bryan Colangelo with his eye on Mickael Pietrus?

Toronto trying to get a late first round pick?

Uros Slokar’s cousin has a 40 inch vertical and is scheduled for a secret workout Wednesday?

Yes, it’s definitely my favourite time of the year, the NBA Draft! Hoopshype.com is spinning out press nuggets faster than you can say Kevin Garnett and with only two locks in the top two spots of the draft, it sure seems like anything could happen over the next few days.

So what about all these rumours? Do any of them seem to be closer to fact than fiction? Let’s take a look at them one by one.

The idea of Mickael Pietrus being targeted by the Raptors come July 1 makes sense. Pietrus is the uber-athlete this team seems to need at the 3 with good size and possibly the most reasonable contract of the Raptors’ prospective free-agent targets. Saddled with some large contracts from previous eras (ahem Adonal Foyle) the Warriors may be hard-pressed to keep the young Frenchman.

And the Raptors trying to secure a late first round pick from Phoenix or Philly seems more than logical considering both teams’ multiple picks, something I discussed in an article earlier this month. Draftexpress is usually quite on point in these matters and with both Rudy Fernandez and Marco Belinelli slated as late first round picks, it wouldn’t be too surprising to see the Raps pull this off. In fact, check back tomorrow as we post our annual pre-draft talk with Draftexpress’ Jonathan Givony.

Finally, what about the New York Daily News’ report yesterday that Toronto was "trying to find backup PG Jose Calderon a new home?" I’m sure his name has come up plenty in talks with other teams, but unless BC thinks he’s found a suitable backup from this weekend’s camp or plans to trade for one, that’s one rumour I’m going discount for the time being.

So what about the camp, was there a point guard or anyone else for that matter who may get a training camp invite or a roster spot?

Things had pretty much wrapped up by the time the media arrived yesterday so it was tough to grab any first-hand observations. However based on talks with numerous on-lookers, several players including Pooh Jeter and Stephen Graham did make a lasting impression. I spoke to both players yesterday and we’ll have the full transcript from all interviews up in the next few days.

However before we get into my thoughts on who could possibly make the club from this camp, let’s take a look at the known roster as of now by position.

The players in limbo?

As one of our readers pointed out, there’s a real conundrum in terms of stocking this team’s bench, maybe for the first time in team history.

The Raptors have 12 of their 15 spots filled at present and need to make some decisions as to how to fill the remaining three. Assuming the Raptors don’t acquire any other players via trade or dip into the upcoming draft, based on the roster above, the obvious holes are in the "bigs" department. So the question really is whether there are better options on the market to fill out the bench for the Raptors than Uros Slokar and Pape Sow keeping in mind that neither of these two are exactly costing Toronto a lot of money. Players like Chuck Hayes, Chris Mihm and Jamaal Magloire might all be available, but will be more expensive and looking to play much more prominent roles with whatever team they chose.

And do you really want to take a gamble on cheaper vets like Michael Olowokandi, Jake Voskuhl, Scot Pollard or Danny Fortson? Both Sow and Slokar have much more potential so from this angle, keeping the two around makes a lot of sense.

However the other side of this coin, especially with Sow, is that at some point Pape and Uros are going to want to show that they’re not merely practice fodder and can at least occupy a role on a team. With the Raptors’ current depth, right now that’s not so likely unless either Sow or Slokar can start to eat into either Kris Humphries minutes at the 4 backing up Bosh (which seems unlikely based on Hump’s play last season) or Rasho Nesterovic’s time at the 5. This gets even more complex if indeed Toronto starts using Bargnani at center as anticipated as once again Slokar will find himself stuck behind his old Benetton team-mate.

And finally there’s another element to this equation – Jorge Garbajosa. It’s something that hasn’t been discussed but what if it takes the better part of next season for Garbs to get his game back? If that’s the case, the small forward by committee approach may have to be re-evaluated unless Toronto does indeed manage to snare Mickael Pietrus. If not, Slokar or Sow might be let go so the Raptors can look at some projects at the 3.

From the recent camp, the multi-skilled Jamario Moon could fit that bill and so could Joey Graham’s brother Stephen ironically. I asked Stephen about the theory that Toronto could bringing him in to drive his brother crazy and he replied "yeah, maybe that’ll get ol’ Joey going." This seemed to intimate that everyone, including the Grahams realize that Joey is not playing up to expectations, including his own.

Unfortunately my personal favourite to get a look this fall Dijon Thompson, injured his knee early in the tryouts and did not play the remainder of the try-outs. Perhaps he still gets a look but right now I’m betting that unless Stephen gets snatched up by another club this off-season, he’ll be the only forward of the bunch to get another look by the Raptors’ brass come training camp time.

What about the Canadian kids, Carl English and Denham Brown? Based on Toronto’s current roster, I’m just not sure where they would fit. Neither have great size and while English does have an excellent shooting touch from outside that would help the Raptors, Luke Jackson is essentially a bigger, more athletic version of him right now. Brown I still feel will find a spot for himself in the league, but he’s got some more work to do on his assertiveness both on and off the court and right now there’s just no room for him at the 2 on this Raptors’ roster.

At the center/power forward position, the only candidate I see as getting another look is Matt Freije. Freije has better fundamentals than Pape Sow, especially on the offensive end and is slightly bigger and more rugged. He plays with that same energy and effort and therefore I could imagine Bryan Colangelo giving him a shot. The other bigs with the exception of Olyumide Oyedeji, just didn’t look to be able to give Toronto the size and rebounding help they need from such a backup position. The problem with Oyedeji, is that he struggled offensively around the basket in the 5 on 5 situations and therefore I just don’t see the rationale in taking him or any of the others in place of say Uros Slokar.

In fact, the one player who stood out the most in terms of looking like he could be a legit asset for the Raptors was Pooh Jeter. The small point guard brought the energy, defense and scoring you’d expect from a backup at the 1 as well as did a nice job of running the team. He’s headed to Sacramento to play for the Kings summer-league team but it seems like he’s someone the Raptors are going to keep an eye on, especially since he played for the Raptors developmental club along with PJ Tucker last year and was scouted extensively.

A final thought from this weekend’s free-agent camp. While I’d never attended a closed-door session such as this before, it was extremely obvious as to how different the Colangelo regime is from the Babcock one that preceeded it. Local media types like Doug Smith and Michael Grange were addressed on a first name basis by Colangelo, Mitchell et al. in a jovial manner and there was a real sense of camaraderie between all who were present, something that you never seemed to feel or see previous to BC taking over, even in front of the cameras.

A big thank you to the Raptors for allowing us to take in the camp and hopefully we’ll be able to attend more of such events in the future.