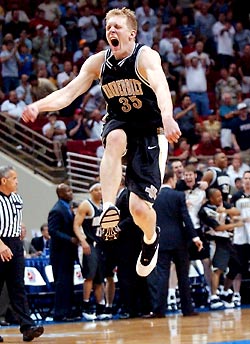 As we’ve discussed on the site quite often, the Raptors go into next month’s free-agent signing period with some definite needs.

However with limited financial resources, little in terms of trade chips, and nary a draft pick to be found, it was going to be interesting to see how the Raptors attempted to fill these needs.

The acquisition of Carlos Delfino was one way of addressing these gaps in the lineup, and this weekend’s free agent camp put on the by Raptors brass, was yet another.

The lineup for the two and half day camp (it began Friday night) read a bit like a who’s who of players who’ve been on the fringes of the NBA for the past year or so, and some even longer than that.

The guards in attendance were:

The forwards brought some Can-Con to the affair namely:

Also among the forwards:

Finally, the centers including:

Yes, a real diverse group to be sure as several of the players such as Mroz, Glyniadakis and Moon I had never even heard of. However it was encouraging to see just how far across the globe the Raptors’ recruiting had gone for this camp, a true testament probably to BC and his right-hand man Maurizio Gherardini, both of whom were seated nearby taking in the action.

When I arrived the five-on-five games were in full swing with Rhalimi, Maraker, Graham, Brown and Gill faced off against Oyedeji, Freije, Moon, English and Jeter. It was very interesting to see the two Canadian kids matched up against each other in Brown and English and English got the better of the contest on this day. In fact, English stood out amongst the other players looking very relaxed and confident draining various difficult fade-away jumpers and even taking a shot to the head which will probably require stitches.

Brown had reportedly tweaked an ankle and while not 100%, looked in better shape than when he was at UConn and was much more vocal on the court. He explained in an interview with the assembled media afterwards that this was something he was trying to work on as in the past he’s been viewed as being too reserved.

The other players who stood out today were Pooh Jeter, Reda Rhalimi, Matt Freije and Jamario Moon.

Moon played the part of the Luke Walton on the court, doing a bit of everything and using some crafty moves to score in the paint.

Jeter was his usual talkative self constantly letting his team-mates know where screens were coming from and to get back on defence. Jeter is under-sized at 5-11 (he actually appears to be closer to 5-9 in person) but has good speed and played some back-up for Sacramento last year. I wouldn’t be surprised to see him carve out a role for himself as a third-stringer in the league as he’s got good speed, quickness, scoring touch and does a nice job running the offense. Will it be with the Raptors? That remains to be seen and probably depends a great deal on the Darrick Martin situation and what the Raptors feel are their most pressing needs considering their available roster spots.

Freije injured his hand and came out of the game before its conclusion but when on the court had an immediate impact on both ends. His size allowed him to get great position on the glass and he displayed an impressive array of up-fakes and post moves offensively. Most of all, Freije brought an energy and tenacity that was unrivaled by the other bigs in camp and it’s this gumption that may land him a spot with a club this upcoming season.

Rhalimi didn’t destroy the other bigs down low, but his shooting touch and the fluidity of his offensive moves for a player his size, really caught my eye. At one point in the post-game shooting drills, Reda hit about 25 shots in a row from all over the court extending out past the three-point line. Few people know that Rhalimi was actually Saer Sene’s partner for pre-draft workouts last year and when teams came to see Sene, they often came away wondering who Rhalimi was as well. I’m hoping to see more of him in tomorrow’s session to see just how effective he is as a rebounder, but his soft hands and ability to finish around the basket coupled with his size definitely made me wonder if he might get another look in next fall’s training camp.

A final note on Saturday’s action; you could really tell which players had gone through these type of camps a million times before and which ones hadn’t. Guys like Stephen Graham (who as an aside could easily have been Joey for all we know based on his ability to get to the rim at will mixed with some extremely shoddy ball handling) and Olyumide Oyedeji have made stops in the NBA and it was very apparent based on the way they communicated with their team-mates and carried themselves on the court.

On Monday morning we’ll be posting our Sunday recap and overall camp thoughts along with various interviews that I conducted with some of the participants. Matt Freije, Reda Rhalimi, Donta Smith, Denham Brown and Dijon Thompson all took a moment to give me their thoughts on the camp and tomorrow I’m hoping to speak with Frank Williams, Pooh Jeter, Stephen Graham, Carl English and Sam MacKinnon.

If there is anyone else you’d like me to get a few words with, let me know prior to noon today.