Share All sharing options for: Media Watch for June 22, 2007 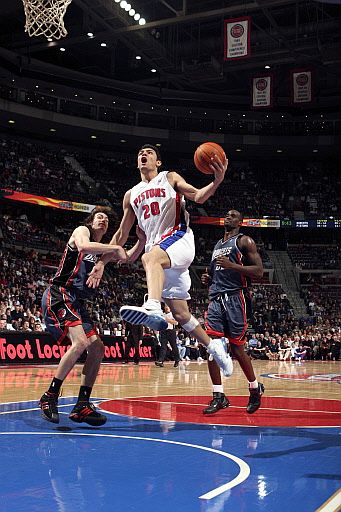 Camp Nugget is back baby!

For those of you who remember, Camp Nugget (as we here at the HQ dubbed it) was an open summer tryout the Denver Nuggets put on a few summers back when they were looking to fill out their roster. It was a COMPLETELY open call and players from all walks of life travelled to Colorado to get some shine.

Holding no picks in the upcoming NBA Draft, the Toronto Raptors are planning to put on their own version of Camp Nugget this weekend, bringing in various players who may have slipped through the proverbial cracks.

RaptorsHQ will be in attendance for both the Saturday and Sunday sessions and will be taking a keen interest in several of the players reported to be participating. With what looks to be the impending departure of Morris Peterson, Toronto could have upwards of three open spots to fill in their roster if Uros Slokar, Pape Sow and Darrick Martin are not retained and therefore there may be a spot for one of this weekend’s participants.

While all the participant names have not been confirmed as of yet, Denham Brown and Matt Freije (who did a nice job in a defensive role in Atlanta last year) have piqued our interest the most and Frank Williams, who was considered at one point a solid back-up point guard option, might even be a good option as a 3rd point if Darrick Martin decides to hang them up and join the coaching ranks.

Of course some of this will depend on what the Raptors do come draft day next week as if Toronto gets into the second round (it looks doubtful right now that they’ll get into the first) that may give them one less roster spot to work with.

The roster spot everyone is expecting Mo Pete to vacate has obviously been taken by Colangelo’s latest acquisition, Carlos Delfino. My compatriot Howland gave his thoughts on the Delfino deal last weekend and I’ve expressed in the past my fondness for Carlos’ game but we thought we’d let you hear it straight from the horse’s mouth.

Matt Watson from detroitbadboys.com hit us up with his thoughts on the deal and had the following to say about Mr. Delfino in general:

What stuck out most about Delfino was his uncanny ability to be in the right spot at the right time to scoop up loose balls. There are a lot of nights that he'll finish with a bunch of rebounds, and it wasn't because he crashed the boards but rather just knew where the ball was going to go off the rim.

As for his offence, he does a good job driving into the paint and has been known to throw down some pretty good dunks. Unfortunately, he doesn't do that consistently -- a lot of times he'll settle for a jump shot, and while his form is pretty, the results are spotty. I won't be surprised if he eventually develops a consistent shot from long-range, but I think he dealt with confidence issues in Detroit knowing that he was often on a short leash.

He pouted at times during his first few years in Detroit. Not openly, but it seems there would always be some interview from a foreign newspaper in which he said he wanted more playing time and/or a trade. This year, Chauncey Billups and some of the starters took him to dinner before the season began and basically said, "Hey, you're with us or against us, your choice," and he seemed to have a change of heart.

The Pistons traded Mo Evans at the draft last year to open up more playing time for Delfino and it paid off -- yes, he was inconsistent at times, but he appeared in all 82 games of the regular season and 16 playoff games. His playing time diminished during the playoffs, but I think that's at least in part because Flip Saunders started to panic and wanted to rely on his starters more.

I definitely think he could be a starter in this league. I don't think he'll ever be a star (especially playing out of position at small forward), but he has a solid all-around game and is usually pretty smart on the court. He could stand to pick up his intensity a bit, and I worry that part of that comes from always playing second-fiddle to someone else his entire playing career (for instance, he's always been a back-up even on his national team
behind Manu Ginobili.) But he's in a contract year, so that probably won't be a problem.

Also, I think he'll benefit from being surrounded with more international players, which works out well for him in Toronto. The Pistons often played a grind-it-out offence, and he should have more success in a more free-flowing, open court offence.

I'd be lying if I said he won't be inconsistent, but again, I think that's related to confidence. What was frustrating (certainly to Delfino but also to the fans) in Detroit was that a good performance rarely resulted in more playing time the next game. Contrary to what Saunders likes to say about players "earning" playing time, there often appeared to be no rhyme or reason from one game to the next, not just for Delfino but also Jason Maxiell. Saunders has "his guys" and the rest of the subs are often confused when they're going to play next or for how long.

Definitely some great insight from the detroitbadboys crew.

We should also mention that we threw in the end of our questions to Matt that we were really hoping BC could pry Amir Johnson away from the Pistons to which he replied: "a lot of Detroit fans even wanted Amir active during the playoffs. He might already be the team's best rebounder..."

So much for our Amir dreams but once again a big thanks to Matt for coming through with his thoughts on the trade.

Interestingly enough, when Fred Jones was acquired last off-season, it seemed that paired with Anthony Parker and the drafting of PJ Tucker, the pressure was securely on Joey Graham to "show and prove." While we saw some of that last year, Delfino’s acquisition is going to turn up the heat once more. As Matt mentioned in the previous section, Delfino too has been inconsistent so far in his NBA career and it will be intriguing to see how Sam Mitchell uses both Delfino and Graham this upcoming season.

Graham has already come out and said that he vows to be more consistent this year, and is planning on studying the game more this off-season, not simply working on his level of fitness.

Of note, Graham’s twin brother Stephen has been invited to this weekend’s tryouts with the Raptors. Could we see twin Graham’s on the bench for the Raps next season? Do Bryan Colangenlo and Sam Mitchell have a secret plan to have Stephen as the 15th player in order to push Joey to reach his potential? It’s an interesting thought to be sure...

Finally in this edition of media watch, it looks like Hockey Night in Canada may soon be joined by Basketball Night in Canada. It’s being reported that CBC will carry a package of Raptors games next season; a move that bodes well for increasing the Raptors profile across the country and allowing CBC Television to reach a younger and more diverse demographic.