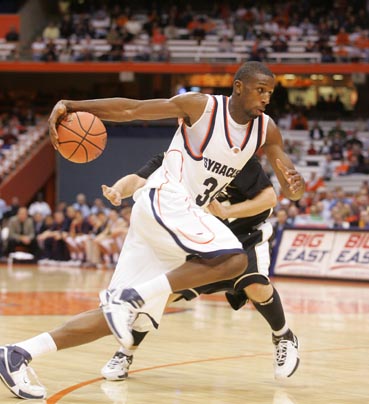 Once again the tag line for this year’s pre-draft camp could read as follows:

"Lots of talented invitees, few of which actually decided to attend."

As a result, scouts have been left to sift through a great number of possible second round options with nary a first round pick to be found.

Beauty of course is in the eye of the beholder however so perhaps a few players will still catch a GM’s eye enough to warrant a late first-round selection. But as a scout told ESPN.com’s Chad Ford, "I think there are some guys who will stick in the league...But I have 30 guys I like better who aren't here..."

So the question for us here at the HQ is, based on the various reports we’ve read and the players we’ve watched this past college season, is there anyone standing out who could help the Raps?

The answer is yes and below are our top five options in addition to several others we’re keeping our eyes on:

Demetris Nichols: Nichols has been one of the camp’s stars to date. Projected as a second-round option prior to Orlando he may now even get some looks near the end of first round thanks to his ability to flat-out shoot the ball. He has great range on his shot and the size and length at 6-8 to score over virtually anyone in Orlando. Past his scoring he doesn’t contribute much but he has done a good job defensively at times in camp and has the tools to be a good defender at the NBA level. For those who watched Syracuse play this past season they know that it may take some time for Nichols to adjust defensively as the Orangemen play so much zone defense. However for a Raptor team that looks to be losing Morris Peterson, right now Nichols looks to be a perfect cheap replacement.

Taurean Green: Of all the players in this year’s camp, Green is one of the more recognizable thanks to his Gators’ back-to-back NCAA titles. He’s also been one of the stand-outs with his heady play at the point. His squad is 3-0 in games and while he’s not superb in any one area, he looks to be the part of a solid back-up in the league as he has a great feel for the game, good speed and athleticism and a decent outside shooting touch. The Raptors have a great situation at the 1 now, but if BC decides to get inventive and looks to deal one of them or move Darrick Martin into a coaching role, Green might be a great understudy.

Chris Richard: Green’s FLA teammate is a bit of a "bull in a china shop" but is one of the real sleepers in this draft. Had he not played behind Al Horford and Joakim Noah he probably could have started at the 4 for 90 percent of the teams in the nation in Division I. Richard has had a good camp to date and his sheer size, strength and toughness might make him worth a look as a late second-round option for the Raps. As we saw against New Jersey, Toronto could still use some help on the glass and someone to come in and push people around.

Reyshawn Terry: As a Duke fan I’ve seen lots of Mr. Terry over the past few years. He’s a player with that prototypical NBA SF body and athleticism. However much like Chris Richard, playing on such a stacked squad at North Carolina scouts have been unable to see just what Terry is exactly capable of doing. So far in Orlando he’s been fairly solid on both ends of the court but still fades into the background at times. He’s struggled with his consistency throughout his college career and he’s the type of player who could go from looking like a first round pick in an individual workout setting to a future D Leaguer in five on five games. However considering the Raptors needs at SF, taking someone who’s skill sets have been compared to Stephen Jackson without the baggage in the second round might not be much of a risk.

Daequan Cook: Of all the participants at the pre-draft camp, Daequan Cook looked to be the player with the best shot at the first round. Compared to Larry Hughes by some because of his slashing ability and mid-range game, Cook unfortunately has not dominated this camp the way he perhaps should. He’s shown flashes at times but at others has looked the part of a freshman as he is one of the youngest players in this setting. I’ve put Cook on this list however as much like Monta Ellis a few years ago, he is exactly the type of player who could drop into the second round due to his rawness but who down the road could pay big dividends for the Raps.

Other players on the HQ radar:

Herbert Hill – One of our pre-draft favourites Hill has not had a great camp however possesses the size and skills to be a legit NBA center down the road.

Ron Lewis – Another of our faves, Lewis has been one of the biggest disappointments in camp so far.

Trey Johnson – Scoring, scoring and more scoring. Much like Kevin Martin, Johnson is a player who flew under the radar playing for a small program (Jackson State) but who could be a great scorer off the bench for the Raps.

DJ Strawberry – He’s no Steve Nash at the point but Strawberry’s defensive tools make him an interesting option perhaps late for the Raps.

Dominic McGuire – Maybe the best overall athlete in Orlando, McGuire looks to just scratching the surface of his potential who would be a great SF option off the bench for cheap for Toronto.