Share All sharing options for: Media Watch for June 14, 2007 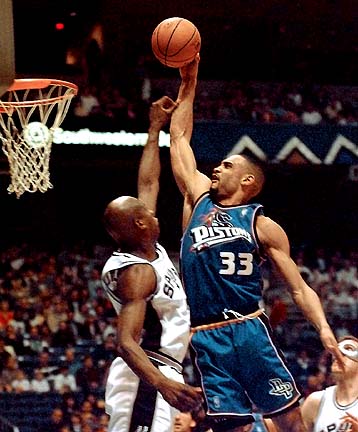 Halftime will never be the same again for Raptors viewers...

The opening means that the Raptors will be promoting former Denver coach Mike Evans to the assistant coach role where he will share duties equally with current assistants Alex English and Jay Triano. Evans had been a scout with the Raps since 2004.

Interestingly, the Bucks continue to take on a more "former Raptor-ish" look as Todd will be joining assistants Brian James and Tony Brown, both of whom were assistant coaches at one time here in Toronto.

For us here at the HQ, Todd will be greatly missed for his half-time diatribes to the RaptorsTV crew. Todd was often quite candid in his assessment of the team’s play and his half-time speeches to Chuck Swirsky would usually go something like this:

"well Chuck, we’re getting killed on the boards. I’m not sure what’s going on tonight but the effort isn’t there. Chris has gotten some good looks on offense but they’re just not going down and we need him to make those easy ones. I thought TJ did a great job pushing the ball but our guys need to be more aggressive going to the rim when they get the pass. Sam’s probably in there letting them know about it as we speak…"

Yep, you could always count on Todd to tell it like it is not to mention take a few shots at the Swirk’s cue-ballesque dome before all was said and done!

Prior to the naming of Evans as a replacement for Todd, we did some speculation here at the HQ as to who else might make a worthy candidate to aid Mitchell. Perhaps someone well-versed in game analytics or defensive tactics like PJ Carlesimo? It looks like PJ is headed however to Seattle and now that Evans has been brought aboard, will the Raptors look to add one more assistant down the road?

From Bryan Colangelo’s recent comments it seems that things will remain status quo now with Evans in place so therefore the next bunch of changes we’ll be looking forward to appear to be of the player variety.

Speaking of which, with the draft exactly two weeks away, trade talk is heating up. One of the names being bandied about Raptor fans’ mouths is Grant Hill, who apparently has named Toronto as one of the teams on the short list that he’s considering this off-season. Hill is currently working the NBA Finals with ABC and will be an unrestricted free-agent come July 1 but is rumoured to be considering the Raptors in addition to the Suns, the Pistons, and Spurs.

I’m not sure about you, but I think the mere fact that one of the better free-agents this summer has Toronto in the same sentence with San Antonio, Detroit and Phoenix, speaks volumes as to the job B.C. has done. If someone would have suggested even a year ago that Grant Hill was considering signing with the Raptors, it would have probably brought on a serious case of the giggles.

As my favourite NBAer and a former Dukie to boot, I’d love to see Hill in Raptor red. He may have lost some of the bounce in his step and will forever be an injury risk, but with the depth the Raptors currently have, wouldn’t he be a perfect sixth man for this team? There are few smarter players in the game or more efficient ones. Hill can still get to the rim with the best of them, is a solid defender and even if he was plugged in to start at the 2/3, Mitchell wouldn’t have to play him starter minutes with the likes of Dixon, Graham, and a recovered Garbo waiting in the wings. This would reduce the wear-and-tear on his body as he probably could start games, and be saved for key situations or to close things out in the fourth. Whether he decides to choose Toronto come July of course is another story but Hill would get a solid vote of endorsement from this HQer.

Aside from free agent talk, it sounds like Jose Calderon is one of the most desirable names on the Raptors’ roster. In Michael Grange’s piece in the Globe he mentions a rumoured Calderon and Graham swap with Atlanta that would have brought Josh Childress, Solomon Jones and the number 11 pick to the Raptors. I too have heard versions of this deal floating around however it makes little sense for Toronto.

Childress hasn’t shown any more promise than Joey Graham and while we loved Solomon Jones last year…we did so as a late second round pick, not in exchange for Jose. As for the 11th pick, unless Toronto was sold on the fact that Mike Conley Jr. would fall that far to them, the Raps would probably be left to pick from the likes of Spencer Hawes, Nick Young, Acie Law and Al Thornton. There are pieces to each player’s game that I like, but right now if I’m Colangelo and looking to make that next push, none of the above are as helpful to me as Jose. Now if Atl was to throw Josh Smith's name into the mix, that would be another story...

Finally to close off the edition of Media Watch, it looks like Mike James is headed back to the Houston Rockets. It’s been reported that a deal between the Rockets and Timberwolves is being finalized that would send James and perhaps another player to Houston in exchange for Juan Howard. Last night Howland and I were discussing this deal and speculating on why either team pulled the trigger. Sure James was not a great fit in Minny, reportedly has issues with KG, and was hardly living up to his contract...but is Juan Howard, maybe a year or two away from retirement, the solution for the T-Wolves? And what does this mean for the other former Raptor point guard in this equation, Rafer Alston. Obviously after Houston’s disappointing first-round exit this year in which Rafer struggled, it looked like the Rockets would be looking to make some changes at the 1, but bringing back Mr. Space Mountain? His game is not that different in many ways from Alston and while a better shooter, is still not the pass-first type to get Yao and T-Mac the touches they need.

If anything, Howland and I pondered whether this meant that the T-Wolves were hoping that Foye could play some 2-guard at times and then praying that Mike Conley Jr. would fall into their lap on draft day. If not, perhaps now we’ll see a backcourt of Foye at the 1 and someone like Corey Brewer at the 2/3.

In any event, the trading of James comes hardly as a surprise considering I always felt he was a terrible fit for Minnesota. Maybe the only surprising thing is that Rob Babcock, the former Raptor GM who originally acquired him both in Toronto and then in Minny, is the one who’s having a hand this time in shipping him out.