15 Questions with the Dance Pak

Share All sharing options for: 15 Questions with the Dance Pak 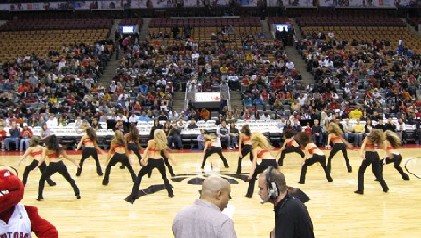 RaptorsHQ - How and when did you get involved with the Raptors and the DancePak originally?

Courtney - I first got involved with the Dance Pak in 1998. As soon as I turned 19 I came out to the audition. I was so excited when I made the team! After two years with the squad, the coordinator/choreographer decided to move out of the country. I applied for the job and was offered the position two days before the audition! I have been the dance team director ever since.

HQ - What exactly is your role with the group?

C - I manage everything involved with the dance team i.e. music selection, choreography (30 routines per season), costume design, running rehearsals, booking dancers for appearances, team outings, perform with the team, and all the administration work. I love it because I can do what I love most (performing, choreography and leading a team) and the job allows me to be very creative.

HQ - What criteria do you use to select the girls each year? What are the tryouts like and how many rounds are there?

C - When auditioning new dancers I look for ability, technique, appearance, style, and overall presentation. The dancers have to exude confidence and demand attention through their performance. The audition is a very stressful process. The dancers are put through four rounds...three dance auditions and an interview. The dancers are expected to pick up the choreography quickly and perform it to the very best of their ability.

HQ - Have any men ever attempted to try out?

C - There are always a few men who audition every year. At one time there were five men on the dance team, back in 1996. But the Dance Pak has since then evolved into an all female dance team.

HQ - How many girls were there originally on the Dance Pak team?

HQ - What was the first choreographed song they danced to?

C - I believe the first choreographed dance was to "It Takes 2" by Rob Bass and DJ E-Z Rock.

HQ - Do the dancers get to interact much with the players? Who's the best dancer on the Raptors? Our money is on Mo Pete.

As for the best dancing Raptor, well, I’ve only seen some of them dance at the Fanfest event in October...I would say they all have potential! :)

HQ - What was the funniest thing you've seen in tryouts?

C - All the judges had a little laugh when we saw how one of the female Dancers went 'all out' with her outfit at one of the auditions. She had a massive wig, go-go boots, a sequin mini dress and crazy make-up! We also had a Michael Jackson impersonator show up! The audition is always very entertaining for the judges year after year!

HQ - How big of a thrill was it for the Pak to finally get to dance to a playoff crowd?

C - It was such a thrill performing in the playoffs! There's nothing else like it! I will never forget the first home playoff game...performing for a sea of red! The energy level was so high and the fans were extremely loud. We love performing for Toronto fans, you can't find another audience like it! The playoff games were a lot of fun and an unforgettable experience!

HQ - What was your most embarrassing moment with the DancePak?

C - We all have an 'embarrassing moment', it happens to all of us at one time or another! Mine happened a couple years ago...it was during the fourth quarter...a full time out was called so I started to lead the group out on the court, after a couple seconds it was changed to a 20 second time-out. The other dancers hadn't made it out to the court yet. When I realized it had turned into a 20-second timeout, I looked back behind me and noticed that I was the only dancer out on court! It was very embarrassing! I remember making light of the situation and doing a little solo dance off the court. Hopefully the fans thought it was supposed to happen :)

HQ - How do you decide what music to dance to?

C - The fans like to hear a variety of music. I use Hip Hop, Rock, & Pop for most of the choreography, and I also choreograph theme routines with the Raptor Mascot to Salsa, Swing, Disco, and Funk to name a few. I usually have the songs mixed by our DJ "4 Korners." If I want to use an older song, they'll remix it for me to give it that added boost of energy.

HQ - Do you find it easier to get up for Friday night games...as compared to say the Sunday matinees?

C - I enjoy both Friday games and Sunday games. It doesn't matter what day of the week the games are...I’m always pumped to get out on court and dance for the fans!

HQ - You've been with the Dance Pak for more time than the other girls...what keeps you motivated?

C - What keeps me motivated are the new challenges that are brought to the table every season and the ability to be creative. I’m doing the things I love...performing, choreography, and leading a team. I always feel a great sense of accomplishment at the end of every season. Each year is different by offering new dancers, new music, a new vision, and new challenges. This job is perfect for me!

HQ - How did Lara move from being a member of the Dance Pak to the In-game entertainment host?

C - Lara was a member of the Dance Pak for 5 years. During her last season we decided to change things up a bit and have her announce some of the in-game contests with Herbie (the Raptors’ court-side announcer.) Lara did a great job and proved to be a natural in front of the camera...the fans loved her. We then decided to have her back the following season as "In-game host." Lara is doing a fabulous job!

Being part of the Dance Pak definitely opens the door and can lead to other opportunities in the entertainment business.

HQ - Finally, there's one big question all of us at RaptorsHQ want to know...who is the mop girl with the blonde hair and why isn't she with the Dance Pak??

HQ – Thanks for your time Courtney and just a reminder to our readers, auditions for the Dance Pak are this Saturday, June 16, 2007 so get your MJ outfits ready!