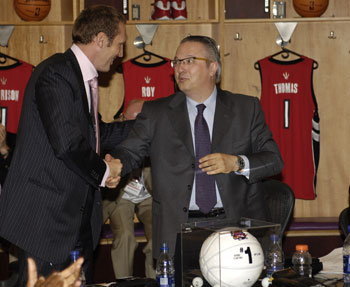 Some of you might recall back early in the NBA season, when it was fashionable to call for the head of Sam Mitchell as the Raptors stumbled through the early season. Thinking back to that time period, even ESPN.com had Mitchell ranked in the top five of their "who will be fired next" list of coaches. There was a huge worry about the amount of new and young players on the club and if the team could ever "gel."

Of course as we all know, once the Raptors took a tenuous grasp of the top of the Titanic Division, that fervor died down.

I really like the Toronto Raptors team, and I confess that I really like their head coach, Sam Mitchell, and respect what he has done with the Raptors. Also, in my opinion Bryan Colangelo is doing a bang up (maybe blow up is a better word) job of getting the right playing personnel for the team.

I consider myself a fan. However, much of my fanaticism is tempered by my professional training in accounting and project management, two fields that rely on facts/numbers to preserve a measure of sanity in an otherwise insane world (full of fanatics, I guess.)

Early in the season, I noticed that the Raptors were running a very high number of minutes with New (to the team but not the league) or Rookie players. It looked to me that that might be a factor in their early season play, or might affect the season, so I analyzed 25 years of won/loss records, and player movements, because...well...that’s what project managers and professional accountants do!

Although it took me some time, it was not all that hard to do, since there are other stats nuts out there who have data like you wouldn’t believe.

So, here’s the skinny. On average, a team that has no player turnover will win 52 games (never gonna happen as every team goes through injuries etc. each year), and a team that has 100% new players will win 18 games (happens each time a new team enters the league.) The Raptors had about 67% of their minutes played by Rooks, and other players new to the team.

So, a team that has about 67% New Player/Rookie minutes (like this year’s Raptors) is going to average 29 wins. Last year’s Raptors had 27 wins, so if that equation had held true, we should have expected only a 2 win improvement over last year. Case closed.

Needless to say, when you look for averages as I did, there are teams that do better and teams that do worse than this average, and maybe something can be learned from that.

Worse. How about the 1998 Denver Nuggets?

They had a 69% player turnover, and dropped from 21 to 11 wins that year. How did they do that? Well, they had 35% of their minutes with rookies Bobby Jackson, Danny Fortson, Tony Battie, and the rest with players who are probably not even household names in their own homes. In other words, there was no glue holding down the fort while the rooks got up to speed.

The 1990 Spurs. They went from 21 to 56 wins with a 68% player turnover, the year that the Admiral, David Robinson came to play and Sean Elliott came in as well. It looks like Terry Cummings, who hit for 1,800 points, and Willie Anderson, who was then a second-year player but knocked down almost 1,300 points, were the sticky substance that bound the team together.

The Timberwolves in 2004 improved by seven wins the year Fred Hoiberg, Latrell Sprewell, Sam Cassell, and Trenton Hassell joined up. They brought in about 4,000 points that year. Meanwhile, KG was the glue and poured in another 2,000.

So, what about our Raptors? Well, CB4 and Mo Pete are probably in the glue category. Last year, they accounted for about 3,000 points, although Peterson obviously did not get the burn this year that he had last year. As to who else we had...well...not a lot of household names to be certain.

TJ Ford was a bit of an unknown commodity for the fans, especially concerning his injury problems from the past. Parker, Bargnani, and Garbajosa were good players overseas, but we all know that European players don’t do really well over here, or they’d all be here, right? Just like black quarterbacks will never make it in the NFL. (Note - tongue firmly planted in cheek.)

Therefore when I first ran these numbers, 29 wins seemed about right with all the unknowns. However based on the early gelling of the club, I just felt that this team would far exceed this mark.

And boy was I right.

However based on the stats presented, in no way did I guess that the club would notch 20 more victories! And furthermore, this improvement came without a player of David Robinson’s status and with almost an entirely new team!

Bottom line. Today, Bryan Colangelo looks like a pretty smart cookie (or bowl of pasta) and my money is on him to grow this team by beating the bushes looking for the talent others cannot see. It sounds like he’s already in nose to the grindstone mode and who knows what free agents from near and far he’ll pull out of his hat.

My money is also on Sam Mitchell and his staff (assuming they all return) to get good mileage out of the roster going forward. For those who questioned his abilities early in the season, here’s something people tend to forget; Mitchell got more out of the likes of Hoffa, Matt Bonner, Kris Humphries, Juan Dixon (prior to his wrist injury) and maybe even Fred Jones (considering his lack of playing time in Portland) then any other coach. He gets faulted for his lack of knowledge concerning the "X’s and O’s" of the game but the current coach of the year doesn’t get enough credit for bringing out the best in whatever talent he has.

Finally, my money is on the players who this year displayed great attitudes and who played with heart and desire right down to the finish. There are no Vince Carter’s on this current club and I tip my hat to Colangelo and co. for the job they’ve done in building this club.

I’m looking forward to another off-season of improvement and who knows, perhaps the Raptors success this past year, considering the fact that they beat the statistical odds, will be a blueprint for future teams to follow.