Share All sharing options for: Media Watch for May 7, 2007 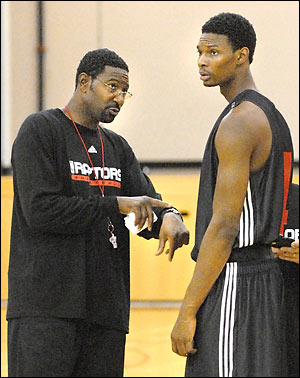 With the exit interviews, locker-room clean-ups and player/coach one on one’s now complete, the off-season has officially begun for the Toronto Raptors and the first thing on the plate is the coaching situation.

In fact Mitchell barely had a chance to take in Toronto’s last second loss to the Nets this past weekend before reporters were coming at him from all sides with questions in regards to his future with the club.

GM Bryan Colangelo stated on Saturday in the team’s closing media session that he fully intends to keep Sam so it sounds now like the ball is truly in Mitchell’s court. Mitchell of course may wish to explore his options after a season which saw him go from being on the hot-seat in the poor-house, to the plush leather of the penthouse.

In reality, this will probably come down to numbers, as most things in pro sports tend to do. Mitchell has some potential suitors in Memphis, Indiana and Charlotte (and perhaps even in Orlando if Brian Hill is cast aside) so if he feels he can get a better contract offer elsewhere, he has some legitimate options.

Given the rapport he’s established with players like Chris Bosh, TJ Ford, Andrea Bargnani and Jose Calderon, Toronto seems to have an edge in retaining his services however it looks like we’ll have to wait to see how this one plays out over the next little while.

We’ll also have to wait to see what happens with Morris Peterson. The longest-serving Raptor seems likely to be moved this off-season, something we’ll be discussing on the site as we get into the free-agent period. Peterson finished the season like the Mo Pete of old which bodes well for his value this summer, and he may wish to find a situation for himself in which he’s not relegated to coming off the bench for inconsistent minutes.

And what about us here at the HQ?

Tomorrow we’ll be posting an article done by one of our readers looking at Toronto’s startling success this past season from a statistical standpoint considering the number of new faces with the club.

Then on Friday we’ll be doling out our final grades for the season for each player.

Finally, next Monday, we’ll be taking the grades one step further and start looking towards next season and what we’re expecting each player to work on this summer, assuming everyone returns.

In all likelihood that won’t be the case but as the summer progresses, we’ll be examining things like the free-agent market and the various changes that GM Bryan Colangelo may be looking to make. Can we swing a deal for Rashard Lewis? Are there any other European players who might fill the club’s voids? And regardless of the lack of picks, we’ll be looking at the upcoming draft. This means we’ll probably be having our annual talk with Draftexpress’ Jonathan Givony concerning which players the Raptors may be interested in from the class of ’07.

Over the next three-four months we’ll be slowing our updates from almost daily to once every three of four days however while the posts won’t be coming as fast or furious, we will be working diligently behind the scenes on improving the site for next fall.

Therefore we’re asking you what you’d like to see!

For next season we’re going to have things like podcasts and video capabilities but are there other things you’d like more focus on or upgrade in? – If so, be sure to let us know! You, the readers are what makes the site so good and hopefully next year we can provide an even better forum for discussion as we watch the Dynos continue to rise in dominance over the Eastern Conference.