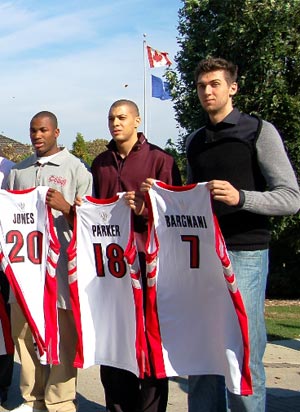 As I sit here typing in the wake of Toronto’s heart-breaking 98 to 97 loss to New Jersey, a sense of calm has come over me.

The immediate bitter sting from this evening’s loss has subsided and instead of dwelling on what "could have been," I’m already looking forward to next season.

In fact it seems like only weeks ago all of us here at the site were posting and clamoring for a new season of Raptor ball, fresh with nine new faces and many new expectations.

-Could this team compete for a playoff spot?

-Would Chris Bosh take the next step in his All-Star career?

-How would heralded rookie Andrea Bargnani fare in his rookie season?

-Was Sam Mitchell capable of melding the unique and diverse talents assembled by GM Bryan Colangelo together?

Of course we know the answers to these questions now and in the end, the Raptors should be proud of what they’ve accomplished this season.

But that’s not to say that perhaps the season could have been extended with a win over the hated Nets this evening.

Jose Calderon’s pass off a perfectly drawn-up play by Sam Mitchell with seconds to go in the game, was just a bit too low and intercepted by Richard Jefferson to finish the Dyno’s off. Had the pass been even two inches higher, it looked like Chris Bosh would have grabbed it for a wide-open, and probable game-winning dunk.

It’s disappointing that Toronto didn’t even get a final shot off, but I can’t really fault Jose for that. Having had numerous major ankle injuries, I’m not even sure how he played tonight, let alone spearheaded Toronto’s attack. Jose was superb on both ends of the court, harassing Jason Kidd as best he could (he had four steals) all the while racking up 14 points and six assists.

TJ Ford played bravely as well providing instant offense for Toronto when they needed it in the game’s second quarter, scoring 19 points in only 15 minutes. Of course there’ll be some discussion as to the point guard situation for next year, and what looked like TJ’s unhappiness with being pulled in the third quarter, (which I thought was the right call by Mitchell as an aside) but these two gutted this one out and without them, I’m not sure the series would have even been close.

And what can you say about the one known as Il Mago? Bargnani was money again and while he didn’t get enough touches, hopefully this is a wake-up call to his teammates as this kid is going to be special.

Finally if this truly was Morris Peterson’s last game in a Raptors uniform (and I selfishly hope it’s not) then he couldn’t have gone out on a much higher note. He scored only nine points but hit some biggies, picked his spots (he was four of five from the field) and more importantly had more rebounds than Chris Bosh with eight and once again did a great job defensively on Vince Carter.

For me, the toughest thing to swallow, and the biggest "what if" wasn’t concerning this evening’s premature exit, but games three and four. Had Sam Mitchell made some lineup adjustments earlier, and had Toronto come to play in even one of those games, then regardless of tonight’s game, the Raptors might still be playing a game seven on Sunday.

Of course after the match, everyone immediately doled into the "well, we’ll get’em next year" and "they’ve learned from this for following years" but I’m not ready to do that. All off-season we’ll be looking at how this team can upgrade and tweak positions so there’s plenty of time for that sort of talk.

No, right now I’d just like to say that I’m proud of this club and how it battled a more experienced team right to the end.

Unfortunately the other team had Jason Kidd, who was the MVP of the series in my opinion. Watching Kidd tonight find team-mates who were seemingly covered, hitting key shots and generally having his way (he averaged a triple double in the series) just proved what an amazing talent he is. Unlike Vince Carter, whose three-point attempt with less then a minute left was the stupidest shot of the series, (and kudos to Dave Feschuk for calling him on it in the post-game talk) Kidd came to play on every possession and is the real reason for any success this team is going to have going forward. Yes Richard Jefferson was huge as well tonight…but make no mistake about it, this team has only one future hall of famer.

Tomorrow Howland will give his thoughts on the game, and in the following few days we’ll give out our traditional team grades and present an article done by one of our readers which looks at this amazing season from a statistical perspective.

But for now I’m going to sit back, have a gin an tonic while visions of Bosh, Parker and Mo Pete game winners, Kris Humphrey dunks, Andrea Bargnani daggers and Calderon and Ford bullet passes dance through my head…

This season has been an emotional roller-coaster and last night was the final corner on what was a wild ride. I couldn’t write about the game last night, I was emotionally spent. This morning there is still a sense of disappointment but, as many will talk about, there is a silver lining.

Looking back on this series there were many twists and turns and although not "special" in any sense (as opposed to say the Golden State series whom I will be cheering for to go all the way not matter how unlikely as before the Raps it was Warriors for me), an interesting one none the less.

What was the key story line to this series? Jason Kidd still being masterful even at this age? Vince Carter’s ability to be half-amazing one second and then half-A-man the next? The amazing performances of the two point guards? Chris Bosh not showing-up until it was too late? The end of Mo Pete’s career as a Rap? Or maybe the fact that people are reporting on Sam Mitchell’s next destination even before the series came to a close?

For me the biggest key to the series was playoff experience. Something these Raps didn’t really have entering into the season. Hell they didn’t even have any WINNING experience. Playoff basketball is very different from the regular season. Not only does the level of play and physicality go up but it is all about adjustments. As we discussed a number of times during this series Lawrence Frank made Mitchell adjust for most of the series rather than vice-versa. I chalk that up to experience. Frank was a step ahead right from the get go. Don’t mistake this for blame however. I don’t blame Mitchell for this series loss because as much as a Coach must make adjustments so do the players. The players need to recognize the things that the other teams are doing and make adjustments themselves, not wait for the time-out or the next game. The Raps inability to do so, I also chalk up to experience, or rather the lack thereof.

If the lack of experience had an impact on anyone it was the franchise player CB4. Over-excited at one time, disappearing the next, and essentially struggling to get his game off Bosh’s lack of playoff experience was exposed in this series. This stretch of six games will never be mistaken for CB4's best basketball. It will however be the pre-cursor to playoff success. Think of the transformation this guy has gone through since his rookie season. Anytime a part of his game was questioned he answered. Couldn’t lead? Leads now. Couldn’t control the ball off the bounce? He does a way better job protecting the rock even compared to last year. Can’t win? No longer the case. Can’t win in the playoffs? I think he’ll respond soon enough.

As quickly as this game has ended the off-season is upon us. An off-season that looks much different from those of the past. Obviously priority number one is Sam Mitchell. There are some really tough decisions to be made over the next couple of weeks in this regard. As much as the players have gained invaluable playoff experience, so has Mitchell. He continues to grow with this team. He, much like Chris Bosh have seen the highs and lows of this franchise and he was also not at his best in this series. Adjustments were just a step too slow coming. The question of course is whether Colangelo wants him to continue to grow with this group of players. They have been through many battles together and he has lead them through the woods. Is now the time to find a new leader? A major decision to say the least.

So no more running around the apartment and feeling like my heart was going to stop for the next six months. Raps playoff basketball has come to an end. The emotional roller coaster has come to a stop for now and it’s now time to get off. The park is shut down for renovations. Whatever changes have been made it has been a great ride.

I for one am looking forward to things opening up again already.