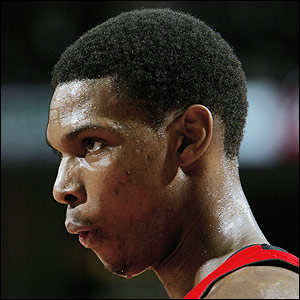 For those who braved the late hours to watch Golden State’s amazing triumph over Dallas last night, they saw just what a team can do when it plays to the style that made it so successful all season.

This is exactly what I hope to see from the Raptors tonight in New Jersey.

Golden State, much like Toronto, played with a banged up squad including its MVP and point guard, Baron Davis. From the sounds of things in today’s press, the Raptors’ fearsome point-guard duo won’t be nearly at full strength either which means I expect to see a lot of Darrick Martin.

In addition, Sam Mitchell at practice on Wednesday (at which neither Ford nor Calderon really participated) mentioned that he may have a few surprises to address the concerns at the 1.

Is Scottie Pippen getting his chance to return to the league in Dyno red and white?

Or is Luke Jackson about to go from NBDL regular, to NBA playoff point-guard?

Who knows but in any event, all will certainly be revealed tonight.

The health of Toronto’s point-guards is obviously the biggest concern for this evening but beyond that, my hope is that Sam Mitchell and the rest of the Raptors can take a page out of the Warriors’ playbook and force a Game 7. Because if they got to see last night’s match, they saw just how powerful a team can be when it plays loose and dictates the style of play.

And that is our first key for a Toronto win.

If the Raptors can get the ball movement they had in the first half against Jersey, stay loose and get up and down the court, this is a winnable game. Jersey likes to play in the half-court until it gets rebounds and then it’s off to the races. If Toronto can dictate the tempo and style of play, much like they did through most of Game 5, then a return to the ACC for a raucous Game 7 is a definite possibility.

However part of ensuring they do this relies on our second key, slowing down Vince Carter and Jason Kidd. Another reason I was happy with Sam Mitchell in the last match was that he had Jose Calderon meeting Jason Kidd beyond half and looking to trap to get the ball out of his hands. The Nets’ Hall-of-Fame point guard obviously wasn’t prepared for this as he even was called for a charge on an inbounds play on one occasion, having a tougher than usual time of getting the offence set-up. That’s not to say Kidd was ineffective, but it was a nice little tweak that helped Toronto out.

In the same manner, the site of Morris Peterson picking up Vince Carter almost full-court brought a tear of joy to my eye as it was something I’d been hoping to see since game one of the series. This slowed down VC in terms of being a play-maker as well and while some argued that Carter still had a great game by scoring 30 points, you’ll notice that he wasn’t near the factor in terms of assists and rebounding, in other words, getting the rest of his team involved.

It helped that New Jersey missed some shots early on but I’m hoping to see this type of defense again this evening from Peterson and whoever is guarding Kidd. I’m also hoping to see Mitchell make a few more adjustments defensively such as ensuring that the Raps hone on Vince trailing fast-breaks, when he’s looking to knock down open 3’s.

Now we turn to key number three - get Chris Bosh going. Yep, this one’s a broken record. But as one of our readers correctly pointed out, Toronto shouldn’t be so dependent on scoring from the point guard position to win games in this series. CB 4 needs to be that driving force offensively for the Raptors if they wish to get out of New Jersey with a win, especially considering the general health of the PG position. Last game Bosh got his chances even in spite of foul trouble, but was still settling for far too many jump shots, especially considering the fact that Jason Collins, his defensive nemesis, was saddled with five fouls for much of the remainder of the game.

But finally, I’m not putting this all on Bosh. The reason Toronto got out of game five with a win was because of total team play, from Joey Graham to Luke Jackson. The team’s going to need to do that again, especially with the current injury situation, and hopefully all are up for the task.

Golden State was last night and came away with a decisive victory over a more season NBA club.

I’m expecting Toronto to come out roaring tonight with something to prove. I am envisioning a tough match-up as I think the Nets will be ready to go too but provided the Raptors derive favourable outcomes from the keys above, this should pave the way for a victory and allow a fanatic Raptor Nation to welcome back its troops for game seven in the T-Dot.