Getting Back Into The Draft

Share All sharing options for: Getting Back Into The Draft 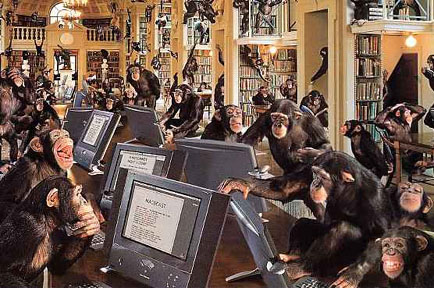 Note – This post is dedicated to my good friend Jaclyn Rogerson who passed away yesterday morning after a year-long fight with cancer. She will be greatly missed by all who were touched by her courage, generosity and passion for life.

As most Raptors fans know by now, Toronto enters this year’s NBA draft in the exact opposite situation as last year.

Instead of having both a first and second round pick, Toronto this summer, thanks to trades made in previous eras, has neither. And with a deep draft and some obvious areas needing improvement, it would make sense for the Dynos to try and get back in the mix.

The question of course, is can they do it?

Even with Roy Hibbert and Brandon Rush withdrawing, it looks like most teams are anxious to hold their picks, especially in the first round.

However the HQ’s team of crack researchers is at it again.

Yes, we rented out most of the chimps from the Metro Toronto Zoo and they’ve come up with some interesting results concerning Toronto’s chances for re-entering the draft. The Raps don’t have much in terms of trade-able assets (a Juan Dixon move here, a sign-and trade Mo Pete there, and not much in between unless Isiah decides he wants Rasho to be his new point guard) but the numbers don’t lie. There are indeed a few teams in this year’s draft who will have to trade a pick or maybe even two. And then there are others, who simply may have no use for keeping the ones they have, even if they’re not in excess.

So let’s take a look.

In the first round, Atlanta, Philadelphia, Charlotte, Detroit and Phoenix all have two first-round picks.

Let’s take a look at the Atliens first.

Having lucked out by landing in the top three thus keeping their pick (which otherwise would have gone to Phoenix) and additionally getting Indiana’s pick, the odds of the Hawks moving either of these is quite slim. The team needs a point guard and someone who can play any position other than the 3 and therefore now have a great chance of grabbing two quality players to fit both of these needs. The other option of course is Atlanta looking to deal one or both picks for some solid veteran help but right now it looks like the Hawks are happy to keep the ever-rebuilding project going by taking two more rooks.

That being said, it is the Hawks we’re talking about here and who knows what they really end up doing.

Next up, Philly. The 76ers management hasn’t fared much better than the Hawks lately and if the team stumbles again this season, critics will look at the team maybe being too successful post Allen Iverson. Their "non-tanking" resulted in much less of a legit shot at the top pick and are now stuck at 12 with much less enthusiastic options to choose from. However Philly looks to be rebuilding from scratch around Andre Iguodala and will most likely keep this pick. Their second selection falls at number 30, the last choice in the first round, and perhaps this one will be attainable for the right price. But right now the 76ers need all the help they can get and with only one second round pick and guys like Louis Amundson, Alan Henderson, Kevin Ollie and Shavlik Randolph filling up their bench, I’m guessing they’ll use all of the selections they have.

Charlotte is in an interesting position. They’ve got a solid and overachieving core via past drafts, a recently signed new head coach, and enough cap space to make some solid additions this off-season. So do they keep two first round picks? Their first pick falls at number eight and it’ll be a keeper. In fact they’re in the enviable position of waiting to see which guy maybe slips out of the top seven that they can grab. With some of the moves that the Hawks and Celtics have made in past drafts, it’s no guarantee that a real stud doesn’t fall to them at this spot.

Their second pick ironically is the one owed to them by Toronto and it’s still in a decent spot at 22. Much like Philly, Charlotte still needs an infusion of talent and with no second round picks in a deep draft, I’m looking at them to check at the draft poker table and wait for other teams to up the ante.

Now we get to the Pistons who are two wins away from another NBA Finals. Can they use their two picks? Even with their improved bench play the team is going to have to shell out to keep the likes of Chauncey Billups and Antonio McDyess so probably won’t have the money to keep some of their veteran bench. And that’s not even bringing Chris Webber into the discussion. So two picks would probably net Joe Dumars’ club some cheap help and keep their cupboard stocked. On top of this, Detroit could really use a legit slashing option as evidenced by their lack of offensive execution these past two games versus the Cavs. I’m looking for the Pistons to hold the 15th pick as there are still several enticing prospects in that range, but maybe the 27th could be had for the right price.

In fact, I think of all these teams, the Piston’s second first-round pick would be the easiest to make a play for...

...because I’m not sure Phoenix will move either of theirs.

After ending up with the short end of the stick in the San Antonio series, they also got burned in the draft as Atlanta got to keep its pick by staying in the top 3. So Phoenix is now stuck with two picks, numbers 23 and 29. The team really doesn’t need these two late picks but needs another impact player to help get them into the NBA finals. The problem is, can anyone actually see someone from the Suns organization making a deal with BC? I mean, if there’s any team (besides maybe Utah) who wouldn’t deal with the Legomaster, it’s Phoenix. They know how this man works!

In the second round Phoenix has only one pick, number 59 of 60, not exactly an impacting spot to draft from either. Therefore I’m expecting the Suns to move one or all of these selections...but I doubt it will the Raptors that they deal with.

Ok, so not so promising for the first round, but what about the second?

Seattle, San Antonio, the Los Angeles Lakers and Chicago all have two picks.

And both the Dallas Mavericks and Orlando Magic boast three second-rounders.

And how about the Portland Trailblazers?

They already hit the jackpot by winning the draft’s top pick but they also hold FOUR second round selections!!! Even if the team loses Jamaal Magloire, Travis Outlaw, Luke Schenscher and Ime Udoka, the team doesn’t have room on its roster for five brand new players. And that’s not even including one of their picks from last summer, Joel Freeland, who will certainly be getting a closer look in camp this year.

Yes, if Toronto’s serious about getting back into the draft, the second round looks to be the easiest point of entry.

Maybe Seattle and Los Angeles both keep their picks as they are likely a ways away from competing for a title, but San Antonio and Chicago have solid clubs and little use for two more players to take up roster spots. As is, prospects like Thabo Sefolosha for the Bulls and James White and Ian Mahinmi for the Spurs are getting little burn so unless both teams look overseas to stash some help, there’s a really good chance that either would be willing to deal.

Keeping with this line of reasoning, Dallas looks like an even better target. Three picks, an underachieving core, and therefore little reason to add three completely new projects to the mix. I expect them to use their first selection in the second round (the 34th pick) as they have no first-round pick this year, but picks 50 and 60? I’d say some of their current prospects (DJ Mbenga, Juan Jose Barea, Maurice Ager and Pops Mensa-Bonsu) will get PT prior to the Mavs giving much thought to taking on any more newbies.

And even Orlando, who still needs some serious bench depth, is extremely unlikely to hold all of its second-rounders. They, much like Dallas, lack a first-round selection this year (it went to Detroit via the Darko deal) but are starting to get to a point where veteran help is much more valuable to them then more inexperienced youth that might not pan out. I’d say they might keep two of three picks, but as is need to get more time for the likes of JJ Redick and Trevor Ariza...not less.

So this leaves Portland, the holder of five possible draft selections this year.

I don’t think the Juan Dixon/Fred Jones deal was enough of a steal to keep them from dealing with BC again in the future and this is really the team that I feel Toronto should target if they want to get back into the draft. In particular, I’d love to see Toronto make a run at Portland’s top second-round choice, number 37. At this point it’s still high enough in the second round that a player like an Arron Afflalo or Alando Tucker could be obtained. As is the case every year, some GM’s in the first-round will be enamored with certain players "upside" and the way they looked in workouts and therefore bypass various tried and true players with extensive college resumes. Hopefully the Raptors can take advantage of this.

A final point to make in terms of Bryan Colangelo and co’s options:

There are several teams in this draft looking to cut payroll who may not want to hold onto picks for financial reasons. Second-round selections’ contracts are not guaranteed so unless roster space is an issue, it’s less of a risk to draft players and bring them into camp to see what they can do. We saw Seattle do this last year with Toronto-native and UConn standout, Denham Brown.

However in the first round, it’s a different story. A team like the Philadelphia 76ers, who have been frantically trying to clear cap space, might be a perfect target for the Raptors as holding the last pick of the first round means a guaranteed contract that Philly may wish to avoid.

I think the bottom line though is that draft beauty really is in the eye of the beholder. Is Glen Davis the next Rodney Rogers, or is he the next Tractor Trailer? What about Sean Williams? Does a GM see the next Theo Ratliff, or the next Eddie Griffin? I think for Toronto to get back into the draft, Colangelo and co. are simply going to have to be significantly intrigued by a player before looking to swing a deal to pursue him.

As draft day is my favourite day of the year, I’m hoping that BC sees such a player and makes a move.

But even if he doesn’t, I’m confident that the Legomaster has some other tricks up his sleeve with which to improve the club.