Share All sharing options for: The Mitchell Era Continues 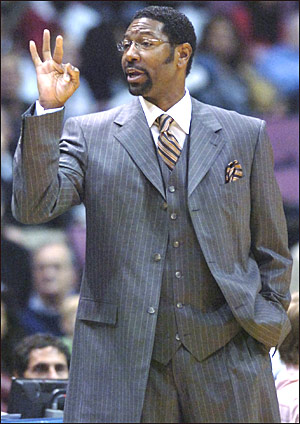 Right now the Toronto Raptors are in the midst of announcing via press conference, the extension of head coach Sam Mitchell, in a $12 million deal.

Besides TJ Ford, there’s no other topic that seems to be more polarizing to Raptors’ fans.

On one side of things is of course the argument that while Mitchell seems to be a good motivator, is he really the coach that can take this club to the next level? And does he have enough tactical knowledge of the game to compete in the playoffs with the Brown’s, Popovich’s and Jackson’s of the league?

On the other of course is the fact Sam is fresh off a coach of the year award as well as leading his club to a 20 win improvement over last season, the franchise’s first Atlantic division title, and its first playoff appearance in five seasons.

And of course just to make things even murkier, it looked like if Bryan Colangelo didn’t get a deal done quick, other teams such as the Indiana Pacers and Charlotte Bobcats were going to come a calling.

So did the Raptors make the right move by keeping Sam?

I for one think they did. It’s to be determined whether Mitchell is indeed the coach to take the club to title contention but to all the pundits out there concerning the re-signing, who would you rather have?

I’ve heard names like Rick Adelman, Marc Iavaroni and Stan Van Gundy bandied about but as I discussed earlier this season with Howland in our "Jump Ball" piece on Mitchell, isn’t this more of a case of the "grass is greener?" Iavaroni has no NBA head coaching experience, Rick Adelman was let go by the Sacramento Kings for his defensive ineptitudes and Stan the Hedgehog, well, I’m just not sure he’s a definite improvement over Mitchell either especially considering the great rapport Sam has with this current group.

In fact, I think Bryan Colangelo and MLSE should be commended for wrapping this up so quickly. With the NBA draft lottery taking place tonight (which as an aside I’m absolutely giddy about regardless of the fact that Toronto isn’t involved) this now puts this issue to rest nice and early in the off-season so the club can focus on its other needs.

On top of this, I’ve been happy with the growth Mitchell’s displayed throughout his time with Toronto. As hard as I am on him at times, (and I do admit that I’ve sat on the fence in terms of his future with the club at various points) he’s continuing to learn the "position" and displays many of the traits that successful NBA coaches exhibit. The club plays extremely hard for him almost every night, he administers tough love but has been able to get great group cohesion from the team, and he’s even learned how to deal with the ever-present Toronto media.

However beyond all of this, there’s one key thing that not many people have been discussing in relation to this issue. The Raptors have gone through six coaches in 12 seasons of existence, not exactly a great way to cement a smooth foundation. However with this move, Toronto’s management is continuing to try and ensure that there is stability in the organization from top to bottom. In previous versions of the club the coach and GM (see the Rob Babcock era) were not always on the same side, and therefore it's extremely reasurring to see Mitchell and Colangelo scheming together on how to continue to build this club into a title contender.

Colangelo also now has the contracts for his head coach, franchise player, top point guard and number one draft pick all expiring at approximately the same time and therefore this gives him about a three year window to see just how these key pieces fit. Unlike in previous seasons when signings and trades happened as reactions to the various scenarios that management was confronted with, for the first time I can remember, Toronto’s management is being proactive in terms of how it deals with the future of the club.

It’s a great feeling to have as a fan and therefore this afternoon’s official extension of Sam Mitchell is one I tip my hat to.