What I Learned From The Playoffs

Share All sharing options for: What I Learned From The Playoffs 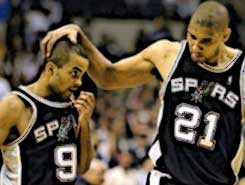 It’s been a little over two weeks since the Raptors were eliminated from the playoffs.

In those two weeks, I’ve been taking in some of the good, (the Warriors upset of the Mavs) the bad (the Robert Horry incident) and the ugly (the Nets-Cavs series) of the NBA’s playoffs and thinking back to Toronto’s first round loss to New Jersey.

What if that pass from Calderon had just been a bit higher?

What if Sam Mitchell (who sounds like he’ll be re-signed any day now) had made his Game 5 and Game 6 adjustments earlier in the series?

What if Chris Bosh...

You get the idea.

However beyond rehashing these thoughts, I’ve also realized that the NBA playoffs are indeed a different breed. It’s one thing to watch other teams go through this discovery year after year, but it’s entirely another when you see your team meet them head on for the first time.
In particular, here are a few things that I’m hoping the Raptors took away from their early exit:

1) Every possession counts: I’d always heard sideline reporters and colour commentators harp on this point year after year, but seeing Toronto lose a number of close games against New Jersey really drove it home. Bosh taking a 3-point jump shot off the break in game six, Humphries forcing the action underneath, Dixon missing a jumper in transition; these were just some examples of plays which the Raptors squandered opportunities for better looks. During the regular season teams go through lapses in intensity and therefore the opportunity to go on a run and reclaim the lead seems to be much more prevalent. Not so in the playoffs as the intensity is ratcheted up and a great example of this is the San Antonio Spurs, a team that almost never takes a possession off and can grind it out with the best of them.

2) You can’t rely strictly on jump shoting: As exciting as the Golden State Warriors were in their playoff run this year, their eventual elimination at the hands of the Utah Jazz showed just how important having an inside presence is in the NBA playoffs. Without an inside presence that could score around the rim, the Warriors were too dependent on their long-range jump shots and had no answer for Carlos Boozer’s tough post-game. In fact throughout the playoffs we’ve seen examples of how a team’s effective inside game can open things up for the outside gunners. Not to beat a dead horse but yes, this is something else that San Antonio is very good at doing - establish your interior play early and the outside will follow.
The Raptors saw this first hand as when CB4 struggled, Toronto became a jump shooting club and had a tough time getting any scoring from anyone other than their crafty point guards. Next year this is something that the Raptors will need to improve on and I’m hoping to see an improved offensive arsenal from inside players like Kris Humphries. If he can come into the game and get some baskets inside, it would really force the Raptors’ opponents to adjust and perhaps lessen the load on Bosh.
After all, even the Jordan led Bulls got some valuable inside play at times from the likes of Bill Cartwright and both MJ and Pippen had great back to the basket skills for guards.

3) If you can’t create, you stagnate:
This next point ties in with the previous one. Toronto’s ball movement and assist numbers were way down in the playoffs and this was partly due to Jersey coach Lawrence Frank’s defensive tactics, and partly due to the fact that Toronto really has few players who can create their own shot. This is something we’re hoping Bryan Colangelo attempts to fix this off-season because as we saw in the playoffs, the Raptors were too reliant on their point guards for offense. While both TJ and Jose can score, an athletic wing who can take players off the dribble would have been hugely beneficial both in terms of breaking down the Nets’ zone, and also helping the team’s motion offense.

4) Your stars need to play at the top of their game: The most disgusting thing about the Cavs/Nets series in my opinion wasn’t necessarily the lack of scoring, but the needless absence of it. Any team with Vince Carter and Richard Jefferson being fed by passes by Jason Kidd should be able to easily put up over 90 points a game regardless of their opponents’ defensive fortitude. However the team inexplicably settled for far too many jump shots and perhaps as no surprise to us Raptors fans, Vince Carter never really showed up. This year’s playoffs have been a lesson in stars who have (Tim Duncan, Carlos Boozer, Baron Davis) and have not (Carter, Bosh, Dirk) carried their teams in key moments and we’ve seen the results for the most part. Yes depth plays a role in the playoffs, but I think prior to their commencement I underestimated the value of star players and how important it is for them to lead their respective clubs. Toronto didn’t get enough of this from Chris Bosh, but I fully believe this will only serve to increase his hunger for a redemptive performance come next season.

5) Coaching: Once the Mitchell signing becomes official we’ll be discussing it at length here at the HQ but as a final point to this piece, part of Sam being asked to return is certainly predicated on his continued growth in the head coach role. This playoffs has provided countless examples of just how important coaching strategy is (see Dallas vs. Golden State for people’s exhibit A) and all of Raptornation will be watching with keen interest to see if Mitchell’s perceived "X and O" issues start to fade away. It was these issues that cause problems for the Raptors in round 1 against the Nets, but the key now will be if Sam can use the experience he gained to be more prepared for these situations next time around.

Which based on the team’s success this year I might add, will certainly be expected right from the drop of next fall’s tip-off, a tip-off that at present unfortunately feels like another decade away for us fans.