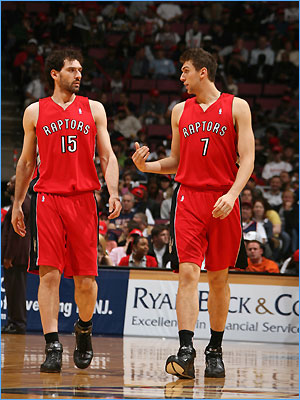 Is a team that doesn’t make it out of the first round bound for mediocrity? No cap space to be had? No decent draft pick? An aging club? Yes, all possible situations for teams mired in the "we’re not quite good enough" routine year in and year out.

Examples? Squads like the Minnesota Timberwolves, (who actually didn’t even make the playoffs this year) the Los Angeles Lakers, and perhaps now the Miami Heat (along with a good chunk of the rest of the Eastern Conference.)

The question then is, do the Raptors fit this mould? After all, the team won’t have much cap space to work with this off-season and no draft picks to speak of in what is being considered a very good draft.

The simple answer of course is no.

This team’s greatest attribute at present may be be its youth and for this reason it hardly looks like the Dynos will end up stuck in the proverbial rut. Beside vets like Darrick Martin and Rasho Nesterovic, the majority of this team is quite young and still "learning the ropes" so to speak. Even Chris Bosh, the club’s leader and franchise cornerstone, is only a few years older than the US legal age.

The other part of this equation is that while the Raptors have an infusion of youth, many of the Raptors "rookies" are hardly of the run of the mill variety. Both Andrea Bargnani and Jorge Garbajosa had successful pro careers in Europe prior to making the jump to the NBA and barely missed a beat this past season in terms of transitioning to the NBA game.

This was further evidenced by their naming to the NBA’s All-Rookie First team on Tuesday where they joined the likes of Brandon Roy, Randy Foy, Rudy Gay, and LaMarcus Aldridge. Incidentally, coming into the season these were the likely rookie of the year candidates...well...all except Garbajosa.

In fact it’s unfortunate that Garbajosa suffered the late-season injury that he did as we never really got to see what sort of impact he could have on the club come playoff time. I suspect however that he wouldn’t have been the answer considering he’s not exactly a creator off the dribble, something the Raptors sorely lacked, but his defense and toughness might have provided Sam Mitchell with an extra body to throw at the Nets.

On top of the youth factor, the Raptors of course have the brilliant basketball mind of Bryan Colangelo leading the charge. Looking back, it still amazes me that in a little over a year, BC completely changed the culture and fortunes of this club. A recent article on CNNSI.com speaks to this fact in addition to touching on the plights of the eight teams who suffered early playoff exits this year. Looking at the teams they profiled, would you as a Raptor fan trade places with any of these clubs?

In fact, of the eliminated teams, besides the Dallas Mavericks I’d say that the Raptors have the brightest future of them all.

-The Mavs have a great squad but obviously have some serious soul searching to do after two monumental playoff collapses.

-The Rockets for all their All-Star power at guard and center, still don’t seem to have enough in terms of complementary players.

-The Heat looked ancient without a healthy D Wade and without any cap space, it will be tough for the team to make significant improvements without mortgaging the farm.

-The Wizards offensively are still one of the most talented clubs in the league. But unless this team gets some help on the defensive end (which they probably can’t afford at present) then it’s simply not going to be able to compete with even the Chicago’s of the league.

-The Nuggets have some room for improvement to be certain. A healthy K-Mart and Nene, not to mention a full year of Melo and AI to establish some chemistry could make this a dangerous club. But the jury’s still out on whether two of the league’s highest scorers can co-exist.

-The Magic with some solid off-season moves however could leap-frog a number of clubs. Dwight Howard is a beast down low and with some significant cap space, the club could make a play to fill one of its various needs. The problem is that Howard is still too much of an one-dimensional player offensively and between the point guard and coaching situation, this team still has a long way to go.

-And don’t even get me started on the Lakers. Kobe regressed to his "I need to score 50 for my team to win" mode late in the season and needs some serious help. The club BARELY made the playoffs this year backing in due to their less glitzy neighbors the Clippers ineptitude.

But call me biased.

Maybe Toronto still needs some spare parts (something I’m sure we’ll be discussing all summer) but you see what I’m driving at here. As much as that playoff loss to the Nets stings, barring injuries I’m pretty confident the team will be back next year, led by an even hungrier squad.

This isn’t a club that’s going to rest on its laurels and besides internal growth from the current players, I’m sure that Bryan Colangelo will be doing everything in his power to keep improving this club.

The player I’m most anxious to see next season? Andrea Bargnani. With another off-season under his belt who knows what Il Mago can accomplish as he’s already drawing comments like these from his coach:

"Andrea seems impervious to anything and everything," coach Sam Mitchell said during the recent Raptors-Nets playoff series. "I don't care what you ask Andrea, he's always fine. I have no idea what goes on in his head. All I know is 7:30, 8 o'clock, Big Rook's ready to play.

How many days till next season kicks off?