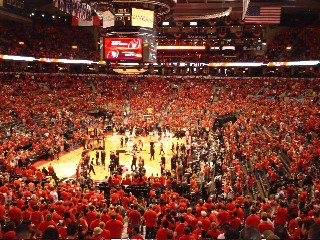 Let me first say that I don’t want this to be the last game-day preview of the year.

And I truly don’t think it has to be.

The Raps’ backs are indeed so far against the wall tonight that they’re probably sinking into the concrete based on their last two performances and one has to wonder just what team will show up tonight.

Will it be the team that almost ground out wins in both games one and two?

Or will it be the squad that looked like a Varsity or YMCA club in games three and four?

As one of our associates pointed out to here at the HQ, the Raps have really been outplayed in 15 of the 16 quarters so far this series with the exception being the fourth quarter of game two.

The team has battled back from adversity all season though and tonight it needs to do it once more.

The thing is, I still don’t think this Nets team is unbeatable for the Raps. Yes, they’ve been superior in almost every fashion to date (and as one of our readers pointed out, have had the advantage at every spot on the floor this series) but the Raptors have been helping New Jersey along with sloppy play, lack of execution, and now lack of confidence. Toronto has played the role of a virgin with "performance issues" who now faces the daunting task of going back into the bedroom with Adriana Lima, Giselle, Karolina Kurkova, and a bevy of other Victoria Secret Models laying in wait.

No pressure...even if it is the Raps own bedroom...

So how can the Dynos pull out a win tonight?

Well for starters, time to shake things up.

Sam Mitchell hinted to reporters yesterday that he was going to make some changes however would not reveal what exactly those changes would be. The popular guess is that he once again will send out a new version of the starting lineup and I think that would be a good place to start. In fact tonight I’m hoping to see Jose Calderon, Anthony Parker, Morris Peterson, Chris Bosh and Andrea Bargnani on the court when this evening’s match tips-off.

TJ Ford has been battling the flu and has been ineffective this series. His shooting struggles have allowed Jason Kidd to sag off of him and double Bosh in the post and perhaps if Calderon can knock down some shots early, for once Sam Mitchell can perhaps force Lawrence Frank’s hand and make the Nets adjust.

It may also open things up for the rest of the team.

If Calderon can force Kidd to come off Bosh, this would leave CB4 with more room to operate one on one, something he’s been unable to do most of the series. Andrea Bargnani started to heat up towards the end of the last game and his shooting could pull the Nets bigs further out of the paint perhaps giving Bosh more space. Running some post moves for him might not be a bad idea either to force a double team on someone other than Bosh. Il Mago is a great passer and maybe getting some easy looks for CB4 and co. for dunks out of double-teams on Bargs would get Toronto’s confidence and intensity back.

And with Parker and Peterson the Raps send out their two best three-point wing threats to flank the others. Both were much too timid the past two games but tonight I expect to see them looking for their shot both from the corners off of ball rotation, and also by pump faking and heading to the rim.

I also prefer these two to Joey Graham or Juan Dixon in terms of matching up with Carter and Jefferson defensively.

The other thing I’m going to be looking at tonight is offensive execution. All the line-up changes in the world aren’t going to matter if Toronto still holds the ball too long and settles for outside jump-shots. In particular, freeing up Chris Bosh, the Raptors’ best offensive threat, would give Toronto a huge boost. Watching the Cavs/Wizards game last night, I saw a way to do that.

Zydrunas Ilgauskas absolutely terrorized Washington with 20 points and 19 rebounds, mostly off of a nifty double screen play that Cleveland ran time and time again. Big Z would set a screen for the point guard at the top of the key and when the Wizard defenders hedged to double the ball handler, Z would get the ball back again and quickly swing it to his wing man (Lebron James in this case.) He’d then go set a screen for Lebron and roll off, eventually ending up on the far left of the court about 14 feet from the basket and wide open to receive the pass for the shot. Ilgauskas’ defender would still be scrambling to get over after hedging on two players and as a solid mid-range shooter, Big Z was knocking the open shots down.

It got me thinking that Chris Bosh could be used in a similar fashion with the added edge that he could even take the ball to the rim instead of settling for the jumper. CB4 could set a screen on Jason Kidd for Calderon and when Mikki Moore hedged out Bosh would then swing the ball to Anthony Parker, set the screen on Parker’s defender (probably VC) and roll off again to receive the pass as Mikki Moore scrambles to get back to Bosh. With Moore in motion Chris could also put the ball on the deck and drive past him in order to draw the foul.

Commentator Bill Raferty even went so far as saying that this was indeed a play other teams could steal and considering the troubles Toronto has had getting their franchise player open, I’m hoping Sam Mitchell has a similar trick up his sleeve for this evening.

Because this could be the last evening for a while in which he’s got a chance to try some different things out and with another raucous home crowd behind Toronto, Mitchell and co. need to capitalize and get back to playing the type of ball that made their season such a surprising success.

I'll be there tonight in standing room only booing Vince and yelling my lungs out and I don't intend for this to be the last time I do this this season...