Share All sharing options for: Tip-In: Second Half Swingmen 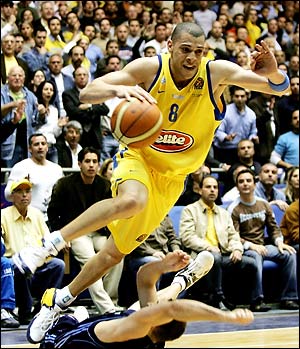 When you are an opposing coach playing the Raps the first thing on the "to-do" list would be to slow Chris Bosh and get the ball out of his hands. Second would likely be to force TJ Ford into bad shots and cause turn-overs. After that? Well you want the other guys on the team to be the one’s to beat you. Well it was the "other guys" that did just that in Toronto’s dismantling of the Chicago Bulls 103-89.

The first half of this game was a back and forth affair but will only be remembered for Morris Peterson’s ejection. What is it with Mo Pete and bad calls getting him thrown out of games? Everyone remembers the Vince Carter slapping fiasco where Mo got the short end of the stick and again on this evening Mo found himself sent back to the locker room after a questionable call. In fact, the call was questionable at best It was obvious as soon as Mo was put into the game that he was full of energy and was looking to have a positive impact. Showing great hustle Mo chased down Kirk Hinrich and in what looked to be an attempt at the ball hit the former Kansas star across the face and head. A foul no doubt, but ejected?

This was simply one of many blown calls on this evening. A perfect example was the call against Bosh after a Deng drive. The play was literally continuing on and the ref some 40 feet away after seeing the ball pop out blew the whistle. This may have been the worst call all year.

Now Mo Pete’s ejection did two things. The first was that it got the fans at riled up, which on a Sunday is sometimes very hard to do. Second, it put more pressure on guys like Graham, Parker and Dixon to step up. Step up they did.

First, Anthony Parker. Parker was magnificent on this evening, in particular from beyond the arc where he went 6 of 10, helping him reach a new career high in points with 27. Now with Garbajosa out Parker is the glue guy on this team. He is also probably the team's smartest player. Can anyone tell me the last time Parker actually forced the action? Considering what he brings to this team night in and night out it is shocking to think that a few years ago Europe was his best option. Of course Europe may be the best thing that ever happened to AP. If there is one characteristic that all of the Raps Euro players share it is high basketball IQ. Each of Calderon, Garbajosa, Parker and Bargnani play extremely smart basketball and play within themselves. Parker in particular.

Juan Dixon was also key to the Raps win. Dixon is instant offence, which is exactly what Fred Jones was supposed to bring to this team. On this evening Dixon not only filled it up (17 points), but did it without needing a huge number of shots. Although a little trigger happy at times, when Dixon is on he is great to watch. His three at the buzzer tonight was a dagger. Juan also managed to fill the stat sheet with 3 boards, 2 assists and 2 steals.

Of course for me, all of this was overshadowed by the play of Joey G. Hmmmm....HELLO!!! Graham’s performance tonight was simply awesome and he has now played three straight solid games. This was one was undoubtedly his best performance as of late, and may be the best game he has had as a pro. Graham was not only great on the offensive end where he was aggressive and showed a vast array of moves, but he also did a fine job on the glass with 9 boards. For me though, it wasn’t the points and rebounds that stood out. It was the assists (5) and perhaps more importantly his defense. We have all seen an aggressive Joey G over the past 2 years, and in many cases too aggressive resulting in an offensive foul. Tonight was different though. Joey was aggressive (and very confident) but also under control. The result was good shot selection but also good ball movement when required. On many occasions it was Graham who made the final pass to Parker for the big trey.

It was Graham's defense that really made me smile as the Raps took over in the second half. Joey's primary responsibility was to defend a very good Luol Deng, and Graham was more than up to the challenge. Holding Luol to 13 points on 13 shots Graham was at his defensive best moving his feet, staying low and using his body to his advantage. This was the type of game that I expected when Graham was drafted. He will never be a 20 ppg scorer but he does have the ability to be a consistent offensive threat from all over the court, help on the glass and be a terror defensively. Of course it is more than possible that he is a complete non-factor next game and we are all witness to a little more "Bad Joey", but tonight it was nothing but Joey G at his best.

As Franchise and I have discussed, now that Garbo is done this team will be looking for another x-factor. With minutes available the second year SF from Oklahoma St. may be just that. As discussed off the top whoever the Raps get in the first round will be focusing on stopping Bosh and Ford. If the Raps swingmen can play at a high level like they did tonight there is no telling how long the Raps season may go. First off though, Minny as the push continues for that much desired third seed.