Share All sharing options for: Tip-In: A Franchise First 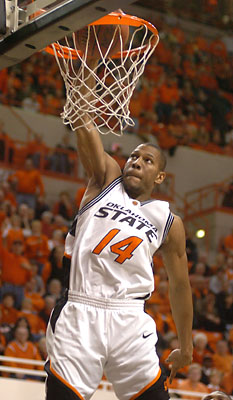 This post is for all the Raptor fans out there.

The ones who’ve watched the team grow from the days of Zan Tabak and Oliver Miller and games being held at the Skydome.

The ones who’ve seen the highs and lows of the Vince Carter era.

The ones who’ve witnessed the drafting of Michael Bradley, Chris Jefferies and Rafael Araujo among others.

And especially the ones who’ve put up with the team’s distant third-place standing in the local media behind the Leafs and Jays, neither of which who’ve been that much more successful than the Raptors.

Yes, last night’s Atlantic Division clinching 94-85 victory over the 76ers was a long time coming for some of us.

And to see the joy on the faces of the Raptors after the win, something fans have become strangely accustomed to seeing this season, was a true testament to the results of the effort put forth from the top to the bottom of this organization.

After the win, and over some "Chippies’ fish and chips," I raised a toast to this club, especially to Bryan Colangelo, whose "Design on a Dime" effort would blow away anything offered on HGTV. I mean, this club won 27 games last year and are now 10 games over .500 and sitting in third place in the East with a division title! I mean, have you ever in the history of sport seen such a complete turnaround of an organization in such a short time span? I can recall a Minnesota Twins team that went from worst to first in the early 90’s, and the recent rebirth of clubs like the Pittsburgh Penguins and Buffalo Sabres, but all of those examples didn’t involve bringing in nine (or 11 if you count both Juan Dixon and Luke Jackson) new players!

Ironically, the last time this team was 10 games over the .500 plateau was in 2000-01, and on the exact same date, when the Raptors eventually finished with their best record in franchise history locking in 47 wins. Toronto can get to that 47 win mark again this year by winning four of their next six, something that in reality may be a test considering they play Chicago and Detroit twice in that span.

But if Toronto can put together a strong performance like they did in the second-half of last night’s game, that 47 mark should totally be within reach.

The Raps looked a step slow in the first half but were buoyed by Chris Bosh as usual until they made their decisive third quarter run. After that, there was little question as to the 43rd Toronto win of the season, even as Philly cut what was once a 16 point Toronto lead to six.

Toronto got excellent all-around play from their entire unit with six players in double figures and Jose Calderon a point under that mark. Toronto also played excellent defense throughout the match limiting to Philly to 42.9 per cent shooting from the field and in particular, I felt that Mo Pete and Anthony Parker did a nice job on Andre Iguodala. Iggy had some highlight reel dunks as usual and a very efficient overall game, but didn’t dominate the way he’s capable of.

Philly caused some problems for Toronto on the glass as expected but the Raptors made up for it by going 20 for 24 from the free throw line. And during yesterday’s game-day preview I spoke of leadership and the Raptors got it in bunches, especially from Chris Bosh who saw his team playing well below their capabilities through most of the first half.

Graham turned in his second straight solid performance with 10 points, six rebounds and three assists but it was one play he executed in particular that brought a smile to my face. As the Raptors were settling for too many jump shots early on, Graham drove into the paint and then spun to the basket for two points. Besides the fact that Graham took it upon himself to get to the rim, it was this offensive move that made me take notice as it showed an element to Joey’s game that I had not yet seen. If Graham can continue to grow and develop he truly could replace Jorge Garbajosa as the X Factor on this club as the playoffs approach.

And yes, the playoffs. Miami’s close win over Boston last night kept things tight in the race for third in the Eastern Conference and truly the Heat’s schedule for the rest of the season appears to be one of the easiest in the league. However Toronto obviously can’t worry about that right now as they simply need to finish the season strong and try to control their own destiny.

So far this destiny has included a guaranteed playoff appearance and now a division title.

Will a first round playoff series win be up next?

That I’m not sure of but right now this HQ staffer is hardly concerned.

PS - Anyone rooting for the Montreal Canadiens tonight? It's something we'll be discussing on the site for sure but truthfully, the best case scenario for the Raptors would be a Leafs loss tonight to ensure that they miss the playoffs. This would put the city sports spotlight solely on the Raptors. Maybe then we wouldn't be relegated to watching curling highlights on TSN before the Raptors' recap...wait, it's TSN, who am I kidding?