Share All sharing options for: Game-Day Preview - Raptors vs. 76ers 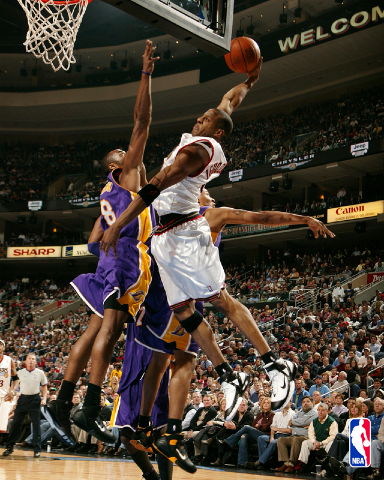 Tonight the Raptors face an interesting test against the Philadelphia 76ers.

Philly has made like Shaun and risen from the dead and in spite of trading the face of their franchise earlier this season, is unbelievably only three and a half games out of the final playoff spot in the Eastern Conference!

And thanks to last night’s win over the Cavs by Miami, all of a sudden, the Eastern Conference playoff picture is pretty muddled...and in my opinion, it’s the Raptors that are the biggest benefactors.

Currently of course, Toronto sits in third place, just a game ahead of Miami. Because of the Cavs loss, the Bulls now sit in second place with the Cleveland falling to fifth. It’s going to be nearly impossible for New Jersey to catch Toronto so at worst, it looks like Toronto is going to hold the fourth spot provided they can’t keep the third.
?We’ve been discussing on the site the best case scenarios for the Raptors in terms of first round opponents and now without Caron Butler AND Gilbert Arenas, it’s obvious that the Wizards are the most attractive first-round prospect. That means Toronto must hold the third spot to ensure a date with Washington.

However based on the standings as of this morning, even if Toronto falls to fourth, they would no longer have to play Chicago and would take on a Cleveland team that seems a less daunting foe than the Bulls. Yes Lebron James can take over a game, but if you saw last night’s Heat/Cavs match on The Score, you saw how Miami turned the Cavs into a jump shooting club, negating Lebron’s passing ability and forcing Cleveland’s other players to beat them. The Raptors have the ability to do the same thing and watching Cleveland’s offensive woes last night made me realize that this is a club that I’d rather the Raptors face than Chicago or a healthy Miami.

But I digress as it’s obviously the third spot Toronto needs to hold onto and to do that they need a win this evening in Philly.

The 76ers don’t offer the depth that the Raptors do or have the overall talent level, but they’ve been playing solid basketball as of late, led by their highlight reel wing-man, Andre Iguodala.

The task of stopping AI II will probably fall on Anthony Parker and if Toronto can keep Iguodala from getting to the rim and getting his other team-mates involved, the Raptors should grab their 43rd win of the season. Iguodala’s only scored 25 points in these teams first two meetings this season so Toronto has already shown that they have the ability to keep him in check.

Toronto of course will have to do a much better job on the glass this evening, especially with rebounding machine Samuel Dalembert in the paint for Philly. The 76ers badly out-rebounded the Raptors the first time these teams met and controlling the glass will be key in terms of limiting Philadelphia’s transition baskets.

The final thing I’m going to be looking at tonight is leadership. We’ve talked a great deal about Sam Mitchell the past few days on the site and I’ll be the first to admit that I'm making myself dizzy in terms of being for/against the job he’s doing as this team’s coach. As I’ve always said, there are some areas of the game i think he does a superb job in managing but others, not so much.

Tonight’s game is easily a winnable affair and I’ll be looking to see Toronto come out focussed from the tip-off (which as one of our readers noted, we never seem to win!) If the Raps get down early and aren’t making adjustments, it could be a long night for the team and this is where the leadership factor has to come in, be it from Mitchell, or even from Chris Bosh.

A very interesting comment was posted yesterday by one of our readers watching the US feed of the Orlando game in which he reported Bosh having a stern chat with Ford about his decision-making. Seems like he wasn’t the only one who took notice as today’s Toronto Star expands on the incident. It’s great to see Bosh play this "father figure" role and it has to make you wonder if both CB4 and Sam Mitchell were really happy with Ford’s shot selection at the end of Tuesday night’s loss to Miami, but simply were being professional and supportive of a team-mate, a laudable stance.

But as another of our readers pointed out, Ford is one of "a bunch of kids with room to grow," and the team’s quick success has simply raised expectations and therefore brought on new critiques. He’s also correct in saying that if Ford had made the shots than maybe everyone wouldn’t have made such a big deal aout it and we’d be praising Sam’s decision to re-insert his starting point guard rather than bemoaning a close loss.

However for this HQ reporter, every time Mo jacks up a contested three, Bosh settles for a jump shot on a mismatch, and yes Ford takes a fall-away jumper from the top of the circle, whether the shots fall or not, I cringe and openly yell at the TV. I want to see this team continue to improve and I’m not prepared to simply say "yeah, it was a bad shot, but he made it so who cares." I believe that apathy is the worst fan quality possible.

And I’m sure Sam Mitchell would agree.

That’s why I’m looking forward to a dominant performance tonight by the Raptors, something they’re more than capable of doing but if things don’t go as planned even in a Raptors’ win, you can be certain I’ll be discussing it to the fullest here tomorrow.