Share All sharing options for: Tip-In: No Magic in Win 42 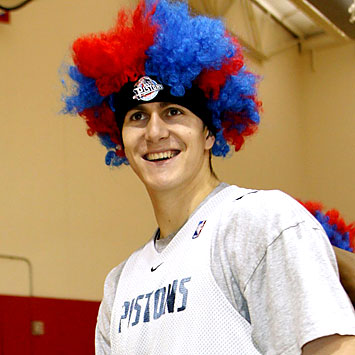 Right now, if I’m the Orlando Magic brain-trust, I know exactly what I’m going to do this off-season.

Forget the Darko stuff, put the possible Vince or Rashard Lewis free-agent talk aside and let’s really get down to business.

This team needs a real point-guard.

The Raps got the best of the Magic in the end to eke out a 111-108 win last night but if the Magic had gotten any kind of leadership on the court from the 1 spot, this game would have been a lot different.

Combined, Jameer Nelson, Keyon Dooling and Carlos Arroyo shot six for 16 from the floor (37.5 per cent) and had four turnovers and only seven assists. Together, Dwight Howard and Hedo Turkoglu had 10 assists themselves!

However poor shooting aside, it was the type of shots that the Magic point guards took (especially Jameer Nelson) that really blew my mind, especially late in the game when the Magic had kept things close and were riding a red-hot Turkoglu. Nelson was settling for his own offence instead of getting the ball down low to Howard, something that had been so successful in the first quarter for the Magic, who shot a blistering 83 per cent from the field. The Raptors made adjustments from the second quarter on though and hard double-teams forced Orlando to look for options other than Howard.

All in all this was a choppy game with 69 foul calls including the second consecutive hilarious "Darko goes AWOL" sequence in a Raptors/Magic game. Last time these teams played you may remember that Milicic picked up a T for arguing a non-call when he felt he was fouled going to the rim. Yesterday evening was even better with Milicic losing it after getting whistled for a holding call on CB4 and having to be restrained by his teammates before eventually being tossed. My favourite part of this though was when Darko pushed Grant Hill (of all people) when Hill tried to hold Darko back as if to say "get off me!" I think the only thing that would have gotten a bigger laugh would have been him pushing JJ Redick.

And speaking of Darko, anyone still see a player that would be a good fit for Toronto next year? Not I and the only thing I feel learned from his time in Detroit is Rasheed Wallace’s attitude and penchant for quick T’s.

(Ironically, it’s Darko who could cost the Magic the point guard they so desperately seek. The Magic owe Detroit their first-round pick in this year’s draft and based on their current record, they’d be picking somewhere around 15th which would probably have given them a solid shot at the likes of Acie Law, Darren Collison and perhaps even Mike Conley Jr. if he comes out.)

But let’s talk a bit more about the Raptors here.

Toronto shot 49 per cent from the field and got great games out of Joey Graham and Anthony Parker to help keep them in this match as the Magic came undone. Chris Bosh was his usual spectacular self and he just got better and better as the game went on. Orlando leapt ahead 37 to 24 after one quarter partly due to some unconscious shooting, partly due to some horrific Toronto defense, but most of all, I felt due to the Raptors settling for jump-shot after jump-shot. At about the four minute mark Chris Bosh finally took the ball to the rim and from there on out, the Raptors looked to attack the basket.

The Raps got some solid bench play again (including another dose of the newly re-signed Luke Jackson) outscoring the Magic 22 to 15 in that department however were out-rebounded badly 41 to 27 and this almost proved to be Toronto’s downfall. Up by one with seconds left, the Raptors failed to rebound the ball when they needed to most giving the Magic an extra crack at a game-winner. And luckily Grant Hill bailed the Dynos out with an offensive foul on CB4 in what otherwise looked like another offensive rebound situation for Orlando.

However I wasn’t so upset about the rebounding. Toronto’s shooting was so horrid in the first half that Orlando’s rebounding stats were a bit inflated with easy boards off of the bricks the Raps were laying. And watching Dwight Howard move players out of the way or clear a path for the likes of Tony Battie made me realize once again that the Raptors really still need to get some help in this area. Think they could have gotten Kevin Willis before the Mavs did?

Let’s finish this off by touching on the point guard situation and Sam Mitchell, two hot topics after Tuesday night’s loss. While I thought Ford played better last night and more under control, I still thought he took too many shots and that’s reflected by the box score for last night’s affair as Bosh took 15 shots while Ford took only three less. I’m just not sure that’s in the club’s best interest.

As for Mitchell, I thought he and his crew’s adjustments defensively throughout the game were solid but once again, I’m completely lost on the rotations. Towards the end of the match Mitchell was still playing Juan Dixon who had another off night from the floor (three for 11) and a small lineup with Bosh at center. Dixon was getting killed by the taller Turkoglu (who had a career high 37 points in the Magic’s loss) and out-rebounded time and time again. By the time Mitchell put Rasho back in to help on the glass it was nearly too late and the Magic had crawled to within a basket. Mo Pete was relegated to nine minutes but besides one heave, I thought he did a great job in the time he was given and would liked to have seen him in the game late instead of Dixon.

The next match for Toronto is Friday night against the 76ers. Philly is coming off a hard-fought win over the Knicks and may prove a surprising foe. It will be yet another key game for Toronto in terms of locking down what looks like an incredibly important third seed in the East. Washington, already minus Caron Butler, suffered another blow last night when Gilbert Arenas suffered a sprained knee. No word on the extent of the injury as of yet but suddenly a match-up with the Wiz in the first-round seems to be beyond the best case scenario and one the under-manned Raps can ill afford not to ensure they get.