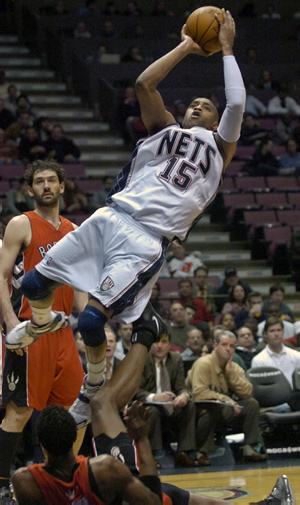 Ever have a nightmare that you can’t shake?

The one’s that you can remember when you wake up and you have flashes of a few days later? Well the performance by the Toronto Raptors accompanied by incredible shooting by the Nets in last night’s devastating 102-81 loss will have that same effect. You can count on it.

Absolutely nothing went right for the Toronto Raptors on this evening. Even though Coach Mitchell shuffled the starting line-up by putting Bargnani at the three while firmly entrenching an ineffective Joey Graham on the bench, things were not much different from the other 3 games as once again the Raps started slowly. And the Nets? They were unconscious.

Before you knew it New Jersey had total control over the game, led by, you guessed it, Jason Kidd and Vince Carter. Kidd and Carter both would have had triple-doubles on this evening had this even been a slightly competitive game and both shot the lights out. Between them they had 10 three pointers, twenty assists and 15 rebounds. Putting on an absolute clinic for all those in attendance at the half the end result of game 4 was never even in doubt.

Was Bargnani in the starting line-up the answer? Sure didn’t look like it. For much of the game the big rook couldn’t get it going offensively, and asking him the guard the likes of Vince Carter out at the three-point line just simply doesn’t make much sense. In fact, we’re not quite sure why Sam Mitchell thought this starting lineup was a good idea at all. With Rasho, Bosh and Il Mago out on the court at the same time, Toronto’s perimeter defence is simply too slow allowing the more athletic Nets to get to the hoop with ease. Unless Bargnani is on his A-game (and hopefully the fourth quarter was a sign that he’s on his way back) it doesn’t force Lawrence Frank to make any adjustments. With limited offense, and a liability on defense it puts the pressure squarely on Mitchell to "counter."

But what do you counter with?

Well after tonight you are left grasping at straws. This game at its core was painful to take in. Not only was Carter wearing his half-amazing cape tonight, but the Raptors again wasted numerous possessions. Generally this team was pretty good during the regular season protecting the ball, and now it looks like they are trying to make up for lost time. With 22 turn-overs, fans were forced to see it all; balls off the foot, terrible passing, and simply falling over. When the opposing team is shooting the lights out the absolute last thing you can do is play sloppy. It wasn’t just the blistering Nets shooting that killed the Raps. It was also the turn-overs and poor shot selection that did them in.

It was actually scary to watch and it will keep Sam Mitchell up at night. At least it should. The Coach of the Year needs to show why he received that award and needs to show it now before the season comes to grinding halt. It won’t be easy though. The Raps look beaten already. Chris Bosh looks exhausted, and there does seem to be much "fire" in the eyes of the players. CB4, the leader of this team, has been owned in this series. Every time he touches the ball the Nets swarm to him like bees to honey and he has spent way too much time outside the painted area.

In fact the entire team has.

Getting back to Toronto’s poor shot selection, our collective hats go off to Lawrence Frank for the job he’s done in regard to having his team prepared on both ends of the court. The Raps still haven’t solved New Jersey’s defensive schemes and as a result, Toronto’s offense has played right into the Nets’ hands. Much like games one and three of this series, the Raptors’ offence came from almost exclusively on the perimeter. The result? Long rebounds that New Jersey would corral and then proceed to run down Toronto’s throat for buckets in transition. So far this series Jersey has out-scored Toronto 49 to 25 on the break and unless the Raps find some way to get into the teeth of the Nets’ defense and knock down shots, we can’t see this stat changing that much.

So is Toronto done? From the last two games it sure looks like it but hopefully a raucous home crowd will re-insert some much needed confidence into the troops. The Nets at present look nothing like the team that jogged through the regular season and one has to wonder if after the Heat’s exodus, Jason Kidd didn’t gather the troops to say "look folks, we have a really good chance of advancing to the NBA finals here, let’s flick the switch."

The switch has indeed been turned to "on" and the Nets are running at full power right down to the last man on their bench, something that’s about as scary as the TSN broadcast yesterday which featured some horrible camera work, commentary, Bruce Willis footage and a 30 point Nets lead that had producers hiding the score for the majority of the fourth quarter.

We still feel that Toronto can get back into this series but it’s going to take a strong showing on Tuesday night to put an end to this two game bad dream.