Share All sharing options for: Game-Day Preview - Raptors vs. Heat 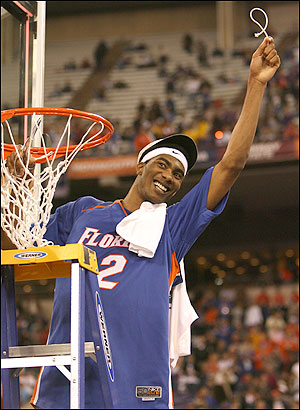 Before we get into what promises to be a big game for the Raptors this evening, props go out to the Florida Gators for their win over Ohio State last night to win the NCAA Division 1 Championship. It was a solid win by the Gators who simply had too much balanced scoring from both inside and out and became the first team since my beloved Blue Devils to win back to back titles.

In terms of stock watch, our first thought here at the HQ was concerning Corey Brewer. Brewer is the player we’d draft here if given the option as his size, athletic ability and defensive play would be a perfect fit between Anthony Parker and Chris Bosh. Yes, he seems a bit quirky
but if you watched last night’s post-game interviews, it seems like the entire Florida club is as well...

Beyond Brewer however, obviously Greg Oden was the biggest benefactor from last night’s match. He was almost unstoppable and if his team-mates could have hit anything from the perimeter, it might have been a closer game. While I had always thought that Kevin Durant was a superior prospect by a nose, after last night’s game, I’m not so sure anymore. Oden’s defence was spectacular as usual but it was his offence that really blew me away. Besides the usual vicious dunks, Oden showed some great foot-work on the low block and his skill-set for someone that size is unreal. He really is the type of player who is going to change whichever franchise drafts him.

Of course the question now is, will he come out?

I found it interesting that it was Florida who beat Ohio State last night in the sense that the Buckeyes have a similar bond between their stars (Conley Jr., Oden etc) as the Gators and perhaps Florida will have started a trend in terms of players wanting to return to college to win a national championship. Ohio State came up just short and it’s extremely hard to believe that Oden and even Conley would hurt their stock by foregoing the NBA for another year. Even with the likes of OJ Mayo and Kevin Love waiting in the wings, Oden should be one of the top two picks and could still use another year of college to work on his offense. However if one of the two goes, I believe the other will follow.

As for our own second-round stock watch, Ron Lewis struggled from long range missing all four of his 3-point attempts but it wasn’t enough for us to lower him on our rankings. He still displayed the explosiveness and ability to get to the rim that made him a coveted second round pick for us here at the HQ in the first place.

And speaking of Lewis, he won’t have much time to contemplate last night’s loss as this year’s edition of the Portsmouth Invitational Tournament kicks off tomorrow! Lewis will be joined by numerous other potential second and late first round picks and some of the players we’ll be keeping an eye on here at the HQ include:

In any event, with NCAA tourney wrapping up, the draft talk will begin to heat up and we’ll really start to hear about the Durant vs. Oden debate.

Going from one monster center to two others, the Raptors take on the Shaq and the Miami Heat this evening and Dwight Howard and the Orlando Magic tomorrow night. Both games of course have serious playoff implications and I’m looking forward to seeing the Raptors put on a repeat performance of the last time they played these two clubs, particularly in terms of rebounding the ball.

I’m not sure why suddenly the Raptors understand the concept of rebounding but it’s amazing to see. This has always been the bane of Toronto’s existence for the past few years but lately we’re seeing even the Raptors’ guards average three or four rebounds a game. If they can keep up their glass-cleaning ways, this is a team that will be very tough to stop down the stretch and into the playoffs.

Rebounding might be the first key to a victory tonight but to get this important road win, I’m going to be watching Toronto’s defensive schemes very closely as well. The Raps did an impeccable job of forcing Miami into shooting jump shots and while Dwyane Wade practiced yesterday for the first time, he won’t be playing tonight which bodes well Toronto in terms of replicating their defensive schemes from last week. Without Wade it will be up to the likes of Eddie Jones, Antoine Walker and James Posey to get to the rim, not something that fits their respective styles of play at the moment.

Miami’s also going to have to find a way to get Shaq more involved as Rasho Nesterovic and Kris Humphries did a great job of limiting his easy looks and dunks. I’m expecting O’Neal to be more selfish tonight so if the Raptors are going to double team, they’ve got to make sure they rotate quickly to find Miami’s open shooters. Without Jason Kapono the Heat aren’t exactly "deadly" from outside however the team is incredibly streaky and the last thing Toronto wants is to allow Walker or Jason Williams to get going from long-range.

Finally, I’ll be quite disappointed if Toronto doesn’t win this game tonight. Playoff implications aside, I simply feel that Miami without Wade is no match for Toronto from an offensive standpoint and if the Raptors are playing well defensively and rebounding the ball, the Heat will struggle to score and we’ve seen how terrible the team can look when their offense gets stagnant. The NBA’s Eastern Conference player of the week Chris Bosh, will be an integral part of a victory tonight but once again I think it’s going to come down to a total team effort and great bench play as usual.

I’m not sure we’ll see Luke Jackson as I expect this match to be a lot closer than last week’s blowout affair. However I’m still looking forward to seeing win number 42 for Toronto this evening, the next stop on their way to clinching their first ever Atlantic Division title.