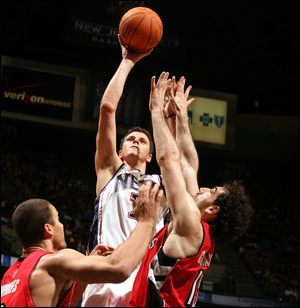 So finally we see the game in replay.

Amongst the Yankees and NFL Draft, we at last get to see just went wrong last night.

And on top of that, we got some outanding comments as usual to help fill in the missing pieces.

So when all was said and done, what are we looking at tonight? Anohther closely contested game in which the Raptors eke out a win in the final mintues?

Vince Carter to continue his re-assecion to relevancy?

Or for the Nets fans to break out into random brawls amongst themselves ala NY Yankees backers?

Nope, I'm expecting none of the above necessarily.

What I am expecting is a solid Raptors squad to be ready to compete this evening.

Last match they were about as ready as the current group of Washington Wizards and this evening I'll be looking for an intense Raptors squad to take the court and tie things up.

One of our readers yesterday mentioned the pace of the game and yes, once again we truly feel that this will be a deterining factor in the match's outcome. If Toronto can dictate the flow and get their point guards involved early, this should set the tone for the game.

TJ Ford and Jose Calderon were two of Toronto's best players last match and need to continue breaking down the Nets defence and getting their team-mates involved.

In addition, I'll be looking to see Toronto really get out and stop the Nets in transition and inside the paint. Sure New Jersey was dominant in these areas on Friday night, but at the same time it looked like the Raps just weren't making a big enough effort to compete in these area.

So am I expecting big things tomorrow?

Well, maybe not a Jorge Garbajosa sighting (who this team really misses as one of our readers pointed out) but at least someone who can create mistmatches and make shots.

If not, this could be a very troubling game five back here in Toronto.

But after copious recaps and local regional verbal abuse, I'm also now realizing how ineffective Chris Bosh was in the last match. He didn't get the touches he needed true; but he also didn't attack New Jersey's interior the way he needed to. If CB4 can get going tonight and/or get his team-mates involved, this bodes extremely well for the Nets unfortunately.

And another Nets win will not sit well with us here at the HQ, regardless of the recent Macleans.ca piece discussing the underground phenomenon of the Raps and their fans. A big shout out goes to Sam, one of our longtime readers who interviewed us for the piece and who helped put it together.

In any event, it's Game Four, Raps vs Nets, and finally a game on TNT. If Toronto can come out with a W it will go a long way towards showing the US public just what this team is capable of down the line.

A loss though...well...that's another story and one that I'd rather not discuss considering the recent heckling we've been subjected to here...