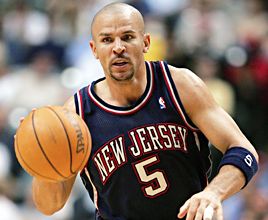 I hate this Nets team.

Yes, I fully realize hate is a strong word, but that's the level of dislike I'm approaching.

Last night here in New York, myself and three members of our bachelor party entourage were tossed from a bar for booing Vince Carter.

I mean, it would have been one thing if we were throwing drinks or something...but a certain female bartender at McDougal's Pub couldn't even have a simple conversation about the fact that Carter shoots fadeaways.

Even though the Nets won last night!

But nope, we were being "rude" (mostly because the bartender probably knew we were making way too much sense concerning VC and this Nets team) and so we had to go.

Whatever happened to being able to support your team and take some ribbing? By the end of it, we were starting to think she and the rest of the Nets fans were starting to take on the personality of their star Vince Carter.

In any event, the end story is that neither Howland or I really saw the game, a major disappointment. But from the game replay at 4 AM on the YES Network, it didn't look like we missed that much.

TJ Ford appreared to carry the club offensively, Jason Kidd hit some ridiculous shots, and Vince Carter broke out of his slump with 37 points.

What happened to Chris Bosh?

Ford didn't appear to be forcing his offense too much but CB4 needs a lot more looks than that.

And so much for a possibly injured Jason Kidd.

Kidd played 40 minutes and almost had 20 points, 20 assists and 20 rebounds finishing with 16/19/16 and simply dominated the game setting the pace for the Nets. When Kidd has games like this, it's going to be really tough to beat New Jersey.

So this is where we turn it over to you folks...

It looked from the game replay that most of the Raps were asleep defensively and the only hunger I saw from the team came from Mo Pete on various rebounding sequences. Toronto was pounded in the paint even though the Nets only got to the free throw line 15 times all game!

We'll be back in Toronto for Sunday's game and hopefully by then, Toronto figures things out. It's one thing to lose some tough grind-it-out matches but another entirely to fall asleep at the wheel like it looks like they did last night.

The next game in Jersey has suddenly become a must-win match and hopefully the fact that we'll be watching it in the friendly confines of a Toronto beverage establishment will tip the scales allowing the Raps to tie this series up...