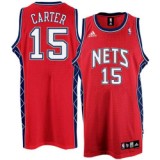 We are a little late getting the recap up today. There are a few reasons for this. The first is there is so much to talk about regarding yesterday’s game it is hard to know where to start. Second, Franchise, myself and others took the opportunity to hit a patio post-game to drown our sorrows. The net result....a late AM. But I digress, and now on to yesterday’s performance, a 96-91 loss.

Heading into the ACC yesterday to say I was pumped would have been a major understatement. The hoards of people wearing red, the excitement in the air, the first nice sunny day ALL YEAR, it felt like things couldn’t get any better. As the crowd piled into the ACC the place was hyped. Playoff basketball was back, and in full force. Hell even Jose Calderon was dunking in the warm-up. Alongside this sense of anticipation however, was a sense of nervousness. It was VC, Kidd and Jefferson coming to town after all with their playoff experience and their winning ways. Nevertheless, the Raps were about to see national coverage in the US for the first time in a long time, and the fans, all in red, were there to back them and show the rest of the NBA and its critics that this was not just a lost franchise north of the 49th.

The "Raptor Red" idea is a good one, in theory, but not necessarily in practice. As the Nets came onto the floor I was shocked to see them sporting their third jerseys. Yes, THE RED ONES. Maybe this was a sign of things to come, because it was the team in red that won. Tell me that we, the fans, didn’t look a little bit hmmmm....lost/confused on US TV wearing the same colour as the opposing team. Seriously, did someone not consider this? A screw-up to say the least. Mind you this was the first of many on the day.

The Raps got off to a terrible start on this afternoon. The reason? Two quick, cheap fouls on CB4 putting him on the bench for more than 12 minutes of game time in the first half. With CB4 on the bench the Nets started to build, what inevitably became a lead that the Raps could not overcome.

Serious credit for New Jersey’s win goes out to Laurence Frank who’s coaching performance was top notch. Frank had his team prepared to face the Dinos. Good sub patterns, great use of the available time-outs, and most importantly an excellent defensive strategy helped his team secure the W. In the fourth quarter when the Raps started to claw their way back into the game and with the fans in a frenzy following a Kris Humpheries dunk, Frank consistently used his time-outs to slow any momentum and re-group.

It was Frank’s defensive strategy that was the key however. Frank and the Nets used a zone for almost the whole game, and a zone that stretched right-up to and sometimes beyond the three point line. The Nets defensive strategy was simple: Force the Raps to beat the zone, but not by shooting over it. So what did it leave? Driving through the zone and creating off the bounce. The biggest area of weakness for this squad. PG’s aside, the Raps don’t have anyone, let along a swingman who can consistently beat a guy off the bounce. AP can get his shot off, yesterday was just a case of Bad Joey (except defensively where he did some ok things), and neither Dixon or Mo Pete are going to be known for getting to the rim. Stretching the zone like they did the Nets challenged the Raps to take it to the hoop and unfortunately no-one responded. The proof is in the pudding as guys who rely on the outside shot were virtually taken out of the game. Andrea looked like a deer in headlights, Mo Pete was a non-factor, Graham was off, and outside of a few corner three’s Parker was not exactly lighting the place on fire.

It didn’t exactly help the Raps that the reffing was terrible. There were some outright outrageous calls and CB4 got very little respect (the same cannot be said for Mikki Moore who was treated like a Hall of Famer). The worst of it was when Andrea was essentially pushed with two hands and then was called for traveling.

At the end of the game one can only take solace in the fact that the Raps played about as badly as they can and as the title of the article suggests, they just need to PLAY BETTER. Adjustments are needed to beat the zone and with the first game jitters out of the way the team needs to settle down. No more passes to no-one, no more blown defensive assignments, and for the love of all things holy, no more standing around offensively. The next game is key as another loss at home could be crippling. Bosh will be ready to shoulder much more of the load (provided he stays away from the Greg Oden impersonation from yesterday) and need absolutely must take it to the Nets. Of course it is not only Bosh that needs to step it up but everyone on the Raps team, including Mitchell.

There is one major concern though. The Nets were not exactly at their best either. J-Kidd did a lot of good things on the court but did not shoot well, and Carter was terrible all around. You have to believe that Kidd will start nailing those open three’s and Carter will have a game or two where he goes off. What then?

It is only the first game of the series, but there are a number of issues that need to be dealt with prior to Tuesday’s game two. In the meantime here’s hoping that someone takes those third jersey’s away from the Nets.