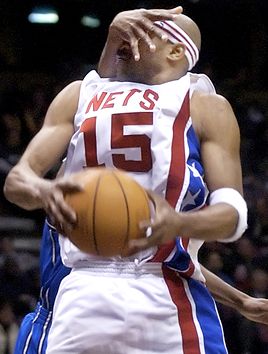 And Vince Carter seemed pretty excited as he skipped off into the locker room after gaining the Eastern Conference’s sixth seed.

Yes, the Raptors and Nets are going to be meeting in the first round of the playoffs after all.

Toronto dropped a forgettable 122-119 match to the Philadelphia 76ers yesterday evening but thanks to a New Jersey win over the Chicago Bulls, Bosh’s Raptors and Carter’s Nets now have a date with destiny in the first round of the NBA playoffs starting this Saturday at noon. The complete schedule can be found here.

When I first started to type this recap up, it hadn’t been decided as to whether the Raptors would be kicking off their first playoff match in five years on Saturday or Sunday, but in the end would it have really mattered? I mean, even just thinking about this series has me canceling all plans for the next few weeks and has Howland purchasing rubber padding for his apartment to both deaden excessive noise and serve as a sanitarium in case this thing goes the distance!!

And go the distance it may. Come Saturday we’ll really get into the playoff previews but for now let’s just say that this series has all the making of a classic battle.

Well, we won’t go that far...but I’m just glad that if it does take that route, we have Luke "Skywalker" Jackson on our side.

Jackson was last night’s MVP in the Raps’ loss, pouring in a career-high 30 points and it’s scary to think how badly Toronto may have been beaten without him.

Yes, I know the argument will be that the game didn’t mean anything in terms of seeding as the Raps had the third spot on lock-down.

However for the fans, this was a pretty weak way to end the season. The Raps had a chance to win their franchise best 48th game of the season yet besides Luke, it seemed like no one else really came to play. Andrea Bargnani made his long-awaited return and while rusty, was probably Toronto’s second best player last night finishing with 17 points and five rebounds.

But the rest of the team seemed to have mailed it in from mid first quarter on, Chris Bosh in particular. I know the goal is to get into the playoffs injury free, but while Bosh finished with 23 points and nine rebounds, he took three straight ill-advised jump shots in the game’s final minutes instead of taking the ball hard to the basket to try and draw a foul.

And the entire Raptors’ squad did their best impersonation of YMCA defense allowing the 76ers (who without Kyle Korver and Andre Iguodala amounted to little more than a YMCA team) to shoot 53 per cent from the field and Willie Green to score a career-high 37 points. In Toronto’s defense, Willie did hit some ridiculous shots and is the type of player ala Mike James who when hot, is tough to cool off.

Of course last night’s game was immediately overshadowed by the impending Nets/Raptors match-up and the playoffs themselves and let’s hope that that is indeed where Toronto’s focus has been the past two games. Because if the Raptors play like they did last night against the surging Nets, yes, things could get ugly quick. The Raptors were out-rebounded 41 to 33 on the glass and out-played in the end by a much less talented club, not exactly what amounts to heading to the playoffs on a roll.

Perhaps I’m being a bit too harsh considering everything this team’s done this year. Watching on TV, it might have been a lot easier to discount the lackadaisical play but being there live and having confetti rain down from the ACC’s ceiling after losing to Louis Admunson, Bobby Jones, Joe Smith and co., just didn’t sit well and seemed a tad bit ridiculous. Yes, this team is light years ahead of expectations at the start of the season and it was a proud moment to see Bosh address another sell-out crowd prior to the unveiling of the Atlantic Division banner.

However I guess I just felt that there was a bit too much "back-patting" going around last night, and now I’m waiting to see just what this club can do in the NBA’s second season.

Bring on the Nets and have your Prozac standing by...