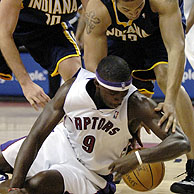 Think about it for a second. It is 8 months ago and some says to you, "I bet by the end of the year the Raps will be playing a meaningless game in Detroit with CB4, AP and Joey Graham on the bench and Uros Slokar will be the teams leading scorer." I almost guarantee you the following thoughts would have gone through your head:

(A) Another losing season.
(B) Injuries have likely taken their toll.
(C) Uros Slokar for ROY?

Anyone would be hard pressed to convince me that what I was actually witnessing was:

(A) The Raps resting their key guys in preparation for the playoffs.
(B) The team having locked-up home court in the first round.
(C) Slokar having almost doubled his career output in points in one game.

With all Slokar kidding aside, this might have been the most enjoyable loss to watch all year. Sure it was DIRTY basketball for most of the game, but watching the "practice" guys get burn against the Pistons starters and top bench guys is satisfying. The experience is valuable, and it is a rare opportunity for the fan to see why these guys are actually on the team.

Slokar and Pape are perfect examples of this. What was clearly obvious tonight is that Slokar looks to be great value for a second round pick. No-one can convince me that not having a single pick in this years draft, even if later than 50, is not a loss (I curse you John Wallace ). Having been teammates with Bargnani for most of his professional career, both as a Rap and playing for Benetton, Slokar and Bargs have similar games. Sure the talent level and ceiling between the two players are drastically different, but both show good inside touch and a sweet stroke from outside. Slokar showed that not only is he big, but he is more than serviceable, can stretch a defense, and is not afraid to get down on the blocks. In fact, his line in the box score is very familiar to what Raps fans have come to expect out of Bargs. A good shooting percentage, a three ball, mediocre rebounding.

It was great to see Pape get some solid burn on this evening as well. Still far from polished on the offensive end (in fact Pape’s offensive game is fairly nondescript) the bread and butter of Spiderman’s game remains being a high-energy guy. Hustling and cleaning the glass are what has kept Pape around the league the past couple of years and tonight Pape showed that his injury from early in the season is not going to stop him from playing in that fashion. For a guy who injured his neck Sow was more than willing to mix it up on the blocks, take contact and hit the floor.

A few other Raps who managed more time than usual did very little with the opportunity. Luke looked more like a no-name storm trooper than someone carrying the force. With 4 turnovers and poor shooting Jackson did little. Juan Dixon seems to be in a little bit of a funk and right now is struggling to get into the shooting rhythm. Hopefully tomorrow night he will be able to find his shot rather than trying to shoot his way out of the funk when the playoffs start. Perhaps the most disappointing event last night however, was Mo Pete’s injury late in the game. Having played a solid game, in particular rebounding the ball, it looks like Mo hyper-extended his right knee. There will likely be more on this injury over the next 24 hours and it was good just to see Mo walk back to the locker room without assistance. Even though Peterson has slowly been fazed out of the rotations as of late, losing a veteran like him for any period of time before the second season has to be considered a setback and detrimental to post-season hopes. Crippling? Definitely not, but a downer none the less.

So what now? Fanapalooza Franchise and I will be heading to the final regular season game against the 76ers. Looking to snare a prize or two while there we will also be looking to head to the Harbour Sports Bar and Grill after the game for a pint in celebration. It’s been a long but exciting regular season and the HQ has been there every step of the way. Who knows how the post-season will play out but after tomorrow’s game it’s time to grab a cold one and reflect on a great 2006-2007 regular season.