Share All sharing options for: Game-Day Preview - Raptors vs. Pistons 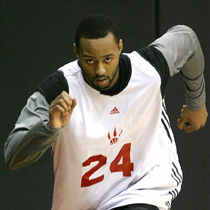 Last night after working OT, I went home and sunk down in front of the TV, in the mood for some comedic programming. No Simpsons, no Seinfeld, and I wasn’t about to indulge in Dancing with the Stars for some unintentional humour...however what I did stumble upon was even better than any of the above - the New York Knicks taking on the New Jersey Nets.

From the outset this was a laugher. Stephon Marbury greeted the MSG faithful with an address promising a better year next season and thanking the fans for sticking with the club. Midway through the first quarter you could already hear the boos.

Yes, Mardy Collins aside, the Knicks couldn’t compete with the Nets and even when cutting the lead to as few as three or four points, the Nets would then drill off eight or nine straight points to put the Knicks back in their place.

Vince Carter had a triple double in the win but aside from a few nice drives to the basket, most of his trifecta came from the porous Knicks defense allowing him to rebound the ball and find open cutters at will.

It got so bad that at one point, the Knicks announcers spent about 10 minutes discussing Beyonce, Kimora Lee Simmons, Tyra Banks and friends sitting courtside with Jay-Z! (At this point I began to wonder if they were ever going to return to actually showing the basketball game so my mind wandered as well and I started surfing the web. Who knew you could get crazy cufflinks like these!!)

Interestingly, watching the Knicks coverage made me think back to Chuck Swirsky’s discussions at the end of last season. Like the Knicks’ announcers last night, the Swirsk was trying to put the best spin on things, even though the logic at the time was laughable. However hearing the Knicks’ crew blame their season’s issues on injuries and saying that they expected a "Toronto Raptors-like turnaround" next season took the cake! Do they know something the average fan doesn’t? Are Isiah Thomas and Glen Grunwald suddenly going to make Jerome James contract disappear and replace him with some unknown Euro stud?

But the best part of the whole discussion for me was the Knicks’ trainer explaining why there were so many injuries this year. Among the reasons given? – the player’s workout habits and their size. THEIR SIZE??? What the hell does that mean?

In any event, the Knicks fell as expected to the Nets and New Jersey finds itself only half a game out of sixth spot. And from the talk around the league, it sounds like the "experts" are expecting a Nets upset of the Raptors should they meet in the first round.

This morning on ESPN.com, Jamal Mashburn was asked about the Nets playing the Bulls vs. the Raptors and his answer was:

"It's pretty simple. As a team, you want to go through the playoffs on the path of least resistance. The Nets play as a perimeter-oriented team, and the path of most resistance is Chicago and their defensive approach. The Nets don't have a big center who can draw the double teams. They want to run the court and shoot the three. That's tougher to do against Chicago..."

"...The Nets want the No. 6 seed for sure. Their style is better suited to playing a team like the Raptors, who use more finesse and less of the physical style."

And last night on NBA TV the analysts concurred saying that Vince Carter and the Nets would be juiced to play the Raptors and have the experience to come out on top.

I still don’t buy this. Yes, the mere fact that the two teams could be playing puts many of us (as one our readers so aptly put it ha ha) on suicide watch but I’ve seen the Nets play their past few games and I just don’t think this is a team that beat the Raptors in a seven game series.

Yes, Jason Kidd and Richard Jefferson have deep playoff experience but who else does on this club? Collins? Not sure that’s going to be the series’ tipping point. And Vince Carter’s playoff experience as well all know, amounts to some early exits and graduation ceremony attendance.

On top of this, Richard Jefferson just doesn’t look like his former All-Star self, Jason Kidd’s shooting has been horrific and he looks a step slow on defence, and besides Mikki Moore, the Nets have virtually no interior. Yes, I’m rooting for the Wizards to hold onto sixth, but for some to claim that the Nets are the best team in the East, I find that a slight stretch.

So will the Raptors go all out for a victory tonight and tomorrow in hopes that perhaps the Bulls and Cavs lose, allowing them to jump into second and face the Wizards that way? It certainly doesn’t look like Washington can hold that sixth spot right now so maybe it would be best for the Raps to go for gusto?

Sam Mitchell apparently doesn’t agree as neither Chris Bosh nor Anthony Parker will play tonight against Detroit. On top of this, Andrea Bargnani will be held out for one more game to get his conditioning up to speed for tomorrow night’s match against Philly. And as excited as I am about Mo Pete and Humpty Hump getting the starting nods as their replacements and perhaps minutes for the likes of Pape Sow, Uros Slokar and Luke Jackson, I’d like to see Toronto go out with a bang to try and get the best possible seeding for the playoffs. It’s unclear as to how much Detroit’s starters will play tonight but if they’re looking for some revenge for last Friday’s close loss, they may get it tonight.

Above everything though this evening, I’ll be looking to see how players who will be getting minutes come playoff time fare against Detroit’s defensive schemes. The Raps struggled against the zone the past few matches and I’m hoping to see wings like Joey Graham, Juan Dixon and Mo Pete aggressively attack the Pistons on offence to create shots for their team-mates.

Win number 48 would be sweet, but I can live with a close loss where the Raptors are out talented and not outworked.