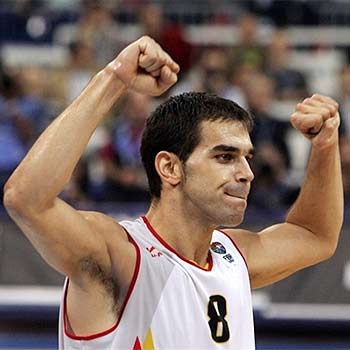 From Hoffa holding a "RaptorsTV" to some of the musical interludes, it at times seems like the ads are the result of co-op programs with local technical institutes.

In fact, many of the advertisements set to music are obvious advertising ploys for new releases and have little to do with the actual basketball team. (Seriously, what the hell does Nelly Furtado’s "Say It Right" have to do with the Dynos who are barely even featured in the clip??)

However lately, RaptorsTV has put together some solid self-promotional items such as the operatic piece on Chris Bosh, and the advertisement featuring shots of Jose Calderon and TJ Ford interwoven with a discussion of how this is "the best point guard situation in franchise history."

The best of them all of late though, has to be a great clip of Jose Calderon preparing to inbound the basketball. Besides being an interesting angle and look "inside" the game, it’s the unintentional comedy that it provides that always kills me.

In the ad we have Calderon looking to get Joey Graham’s attention so he can get him the ball out of the inbounds play. However it’s obvious that Joey’s attention is focused somewhere else and Calderon is relegated to making various sound effects to refocus Joey so he knows the ball is coming to him.

After the first time I saw it I burst out laughing partly because it reminded me of Kramer "whooping" in an old episode of Seinfeld trying to show that Joe Dimaggio was completely focused on dunking his donuts and partly because of course it had to be Joey Graham, the consistent model of inconsistency until recently, who was the subject of Calderon’s gesticulations.

But the irony of the whole commercial was displayed last night when it was Calderon who found Graham wide-open for the game-winning basket off an inbounds play which resulted in a 107-105 Raptors win, allowing Toronto to clinch home-court for the first round of the playoffs.

It was Toronto’s 30th home win of the season, an all time high for the club and also tied the franchise record for total wins in a season. A victory in one of their final two games will set a new record for this club in a season that’s already been filled with team and personal bests.

The Knicks fought hard last night and as they have in every one of their past six wins, the Raptors found themselves down at the half. New York established Eddy Curry early and often and the big man finished the night with 30 points and eight rebounds. Steve Francis also had a huge game for the Knicks with 28 points and eight boards and New York got huge contributions from Malik Rose (18 and seven) and Mardy Collins (a near triple double with 12 points, 11 assists, and eight rebounds) and extended this game as far as they possibly could.

However the Raps hit their free throws down the stretch and tightened their D, something they were unable to do in the first half, and in the end came away victorious.

The one troubling aspect of this win for me was Toronto’s ineffectiveness once again in dealing with an opposing team’s zone defense. The Knicks used the zone to force the Raptors into becoming a jump-shooting club and with the shots not falling, especially from long range where they were only three for 14, New York climbed ahead. This is the second straight game where the zone has befuddled the Raptors offensively and Toronto has to work on this prior to the playoffs where they’re sure to see a good deal of it from their opponents. Miami has used the zone quite effectively this season and so has New Jersey to protect their small interior and in all likelihood, the Raps will be facing one of these two clubs.

With a win yesterday afternoon and a Washington loss (in fact "loss" is a nice way of describing the outcome of yesterday’s Wizards/Bulls game considering that the Wizards looked like a rec-league team) the Nets are now only a game out of sixth with two games to go. As one of our readers pointed out correctly yesterday on the site, it’s looking more and more likely that Vince will start his playoff season at the ACC this coming weekend. Washington still needs to play Orlando and Indiana while New Jersey faces New York and Chicago and holds the tie-breaker against the Wizards. Therefore a win tonight by the Nets over the Knicks puts a huge amount of pressure on the Wizards to win one of their final two games, something that seems very unlikely considering yesterday’s performance against the Bulls.

And all of this means?

Well, I guess for the first time in recent memory, I’ll be cheering for the Knicks to win when they take the court this evening.

So what about the Raptors’ final two matches? With third place locked-up, will we see victory number 48 or will Sam Mitchell look to give his guys some rest. I’d like to see a 48th win but there’s always next season for that. Right now, I think it’s important for him to give some of the guys a break and more importantly, get some minutes for players who he may have to rely on for minutes come playoff time. Players like Juan Dixon and Kris Humphries (both of whom made key contributions in last night’s triumph) and even Luke Jackson.

More importantly though, I’d like to see Morris Peterson and Andrea Bargnani get back in the groove since both have really been MIA in various ways the past few weeks. Peterson received the dreaded DNP last night against the Knicks and of course Il Mago has been out while recovering from his appendectomy. It sounds like Bargnani will be good to go by Wednesday if he doesn’t play on Tuesday but in any event, I think it’s important to get these two back in game situations.

And while we’re on this topic, how about some Pape Sow and Uros Slokar?

These two have been holding down the bench all year and it would be nice for them to see some action prior to the playoffs.

It’s still somewhat unreal to me that this team has won 20 more games than last year and is about to embark on a playoff journey this coming weekend but be it against Vince, Dwight or Jamison, let’s hope Sam has this club rested and ready to go.