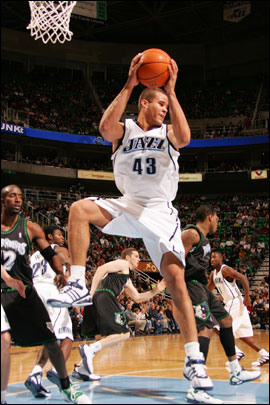 Ever won something yet still in someways feel like in the grand scheme of things you really lost? It’s a bitter sweet feeling and one that the Toronto Raptors must be feeling one day after their 87-84 comeback victory over the first place Detroit Pistons. How so you ask? Let me explain.

At first it looked like the Raps were going to buck their current tendency of starting slow as they opened the game on an 8-0 run. That small lead quickly disappeared however and the Raps were behind for much of the game, the deficit generally around 8 points. Suddenly, like many games as of late, someone flicked the switch in the fourth quarter and the deficit was turned into a surplus....or rather the lead and then the win. Highlighted by a three point bank shot at the end of the shot clock my Anthony Parker, a hard drive and finish by Joey Graham and a late steal by TJ Ford the ACC fans were bouncing off the walls. The Raps had stolen a game from the East’s best squad. Something to be excited about heading into playoff time right? Not quite.

True to his word, coach Flip Saunders treated Friday night’s affair as an exhibition match. Detroit’s regular starters played somewhere between 19 and 28 minutes and their leader Chauncey Billups was in street clothes. Generally held to playing the first and third quarters Detroit’s starters did not exactly shoot the lights out, highlighted by a 1-7 performance from Rasheed Wallace, 3-11 from Tayshaun Price and 1-9 from Chris Webber. Although one could probably find a way to give kudos to the Raps D, let there be no mistake about it, the Detroit Piston starters, despite their horrid shooting, still managed to out play the Toronto squad. The king’s of the Eastern Conference put the smack down on the new kids on the block.

The Pistons came at the Raps with a zone defence right from the get-go and the Toronto squad had a terrible time trying to beat it. Bad shooting accompanied by a lack of commitment to attack the zone quickly helped the Raps squander their quick lead. For those portions of the game where Flip had his usual suspects on the floor the Raps couldn’t gain any momentum, let alone get back in the game.

Of course it wasn’t all bad during the first and third quarters for the Raps. Two things in particular stood out in my mind. Obviously the first was the monster performance by Kris Humphries on the glass. Checking into the game with around 4 minutes left in the first quarter, before you could blink the man from Minnesota had four rebounds, three off them on the offensive end. A sure sign of things to come. By games end the Hump had snagged 18 rebounds, NINE of them offensive. NINE!. For those who think the Raps need to get a banger and rebounder in the off-season check your mail this morning because Kris Humphries just sent a message. The ability to get your squad additional possessions is huge and Hump was simply awesome in this regard. On top of his rebounding showcase Hump was also solid on the defensive end and blocked three shots. (As a side note Hoffa has never blocked more than 2 in a game and has a TOTAL of 16 in his career.)

The second, maybe not so obvious thing I liked about the Raps tonight (again, while the Pistons starters were on the floor) was Joey Graham. I know, I know the reaction is probably "Huh?" Hear me out. I think we saw a different Joey on the floor tonight. One that we may have never seen before. It was not a classic case of "Bad Joey" but rather "Good Joey" having a bad night. You may not see the difference but I definitely do. Graham, despite a below average shooting still looked very confident on the floor, took good shots and showed great versatility on the defensive end. Mitchell did a great job using Graham having him defend not only Tayshaun, but also Jason Maxiell. Graham was solid against both and considering there may not be two more different players on the Pistons roster you have to give full props to Joey. One player loves the post and is an absolute hog, while the other looks like a relative of ET.

Of course the Raps did WIN this game and watching the come from behind victory was an exciting one at that. When Flip turned to his bench the wheels fell off and the Raps starters took it to them. Despite being entertained however, what else can you take from the game? You have to believe the Raps starters would take it to the second stringers for the Pistons every time. If not, then the Raps will have no chance should these teams meet at some point in the playoffs. This is of course the exact message the Pistons were trying to send.

It’s not to say that the Pistons bench is not a strong one. Maxiell, McDyess, veteran Lindsay Hunter, and despite the obvious differences between he has with Coach Saunders Carlos Delfino, all make for a strong bench. The Raps did however mount their comeback against guys like Ronald Dupree and late second pick Amir Johnson as well.

Toronto’s pick is currently number 52 in the second round. Should Toronto keep that position the Raps will be out of the draft all together. It could be a quiet draft, and summer ladies and gents. We do however take solace in the fact that if there is a deal to be made Colangelo is on it, and you know we at the HQ will still find lots to talk about.

Another interesting note from last night’s game was the attendance of Vince Carter’s mom at the ACC. Sitting courtside it has been quite sometime since Michelle Carter has graced the ACC with her presence. Carter obviously still has ties to the city (last time I checked he still owned part of the Inside) and attending an exciting basketball game is something Michelle has not seen in quite some time so I wouldn’t take much from it. In particular I would advise not thinking about the return of VC (that means you Marty York). What was absolutely hysterical though is that at no point during the game did she express any emotion. Not once. Even as the game got closer in the final stretches Michelle didn’t applaud, didn’t stand, didn’t even smile. It appeared that she was there with "Super Fan". Not so "Super" I say as the man with court side seats also showed little emotion during the Raps win as he must have been appeasing his guest. In the end the question I have about this whole scene is "Why even come?" If you are not there for a good time and are going to sit and pout for the whole game, what’s the point? Even when I was in Foxburough watching the Pats (a team I hate with a passion), it was still hard not to cheer and get into the game.

At the end of the day the Raps have learned a very important lesson from the win over the Pistons. That lesson? Be ready to take your game to another level come playoff time. Those teams that have been to the top of the mountain know what it takes, and what it takes is a better performance that what was shown last night.

PS: A shout out to those I attended the game with last night and good luck to the individual that promised she would eat 10 MAMMOTH cookies in one sitting if the Raps stole the victory. Good luck!