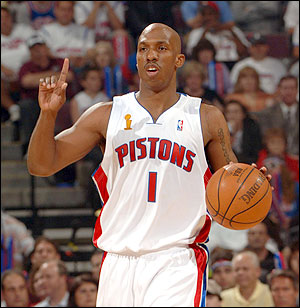 Let’s start this game-day preview with our "who’s bright idea was that??" section.

After hearing numerous horror stories from Raps’ fans trying to get tickets yesterday via the Raptors.com Insider sale, we did some checking into things and while we’ve not received any confirmation from MLSE, it seems that the majority of tickets for the playoffs had already been bought up by season ticket holders before the sale was even on. Were there 1000 available, a couple hundred? We’re not sure.

But what we do know is that allowing season ticket holders the opportunity to buy an extra SIX PLAYOFF TICKETS ON TOP OF THEIR OWN, has to be one of the least thought-out plans ever. SIX? I could see two, MAYBE four. But six? Obviously with the team’s success, season ticket holders were going to snatch up as many tickets as they could and sell the rest off. And if you take one look at Craig’s List today, you’ll see that that’s exactly what happened.

As one seller on Craig’s list, who shall remain anonymous, told us here at the HQ when we asked why he was charging us 137 dollars for a ticket he paid 33 dollar for: "well...that’s pretty much the going rate on Ebay and other ticket sites..."

I know you’re upset that the Leafs didn’t make the playoffs, but was it necessary to try and transform the Raptors into the Leafs Part II in terms of making the games inaccessible to the fans? The last thing I want is for the ACC to be filled with stuffy suits for TNT’s first glimpse of the Raptors in years.

So when the Raptors do appear on TNT, who will they be facing?

Right now, the Raptors are holding down the third spot and would be facing the sixth place Wizards. Many are speculating however that a first round date with Vince Carter’s Nets is unavoidable.

I’ve got mixed emotions about such an encounter but before we delve into that, let’s look at both the Nets and Wizards remaining schedules:

Based on the Knicks’ recent play and habit of allowing other teams to "run up the score," that looks like at least a two and two record for the Nets to finish off their schedule.

After their loss to the Cavs last night (more on this in a second) New Jersey finds itself two games behind the Wizards. Would two Nets wins get the job done?

The Wizards finish things off by playing:

Atlanta tonight,
Chicago on Sunday,
Orlando next Tuesday
And Indiana next Wednesday

The Hawks game looks winnable but other than that...yikes.

For those who saw last night’s horrendous game between the Cleveland and New Jersey, neither team exactly instilled fear in the rest of the East with the display they put on.

New Jersey in particular looked horrid as they shot 41.8 per cent from the field with Richard Jefferson scoring only five points on two for 13 shooting.

However beyond their offensive woes, it was New Jersey’s 20 turnovers and lack of rebounding (the Cavs out-rebounded the Nets 42 to 29) that really caught my attention. While many have been saying that a healthy Nets club would pose a threat to anyone in the East, I don’t see it. This isn’t even last year’s Nets’ squad and the lack of depth, rebounding and passion displayed by New Jersey this season doesn’t put them in the same class as Miami, Cleveland or Chicago in terms of teams I’d rather Toronto not face in round one of the playoffs. That being said I’d still prefer that the Raptors face the Wizards but if Vince and co. end up as the opposition, bring it on.

Regardless of who the Raps end up facing, one of Toronto’s advantages over its opposition may be their depth. The Raps have used this depth successfully all season to both wear other teams out and cope with the various injuries that they have been inflicted with. On RaptorsTV’s "Full Court Press" yesterday however, Doug Smith and Steve Buffery argued that come playoff time this advantage would be negated as teams tend to cut their rotations to eight, maybe nine players. While that may be the case typically, Jack Armstrong raised some good arguments in response to this rationale. Other teams usually cut their rotations to eight or nine players because they simply don’t have the same luxury that Toronto does in terms of depth and as Jack pointed out, guys like Kris Humphries, Juan Dixon and even Mo Pete can provide the Raptors with key plays off the bench.

Last night on Hoops, Armstrong reiterated this notion and pointed out that in any sport, the deeper teams tend to be the most successful ones. A great example of this was North Carolina in this past NCAA season. Not only was the team extremely talented, but they were perhaps the deepest team in the country and would simply run other teams out of the gym. Roy Williams’ philosophy was that if his ninth or tenth man was better than the other team’s, than his squad had the advantage. I think we’ve seen this work for the Raptors all year, and there’s no reason why it shouldn’t come playoff time to keep Sam Mitchell’s team fresher than that of his opponents.

Speaking of Sam Mitchell, it sounds more and more like he’ll be asked to stick around after this season. Yesterday, GM Bryan Colangelo came out with his strongest endorsement yet of the job Mitchell’s done. And last night on TNT there was a resounding vote for Mitchell to claim the coach of the year award, something which seemed ludicrous even four months ago considering he was a favourite to be fired among NBA coaches. While it’s not set in stone that Sam will be back next season, things keep looking better and better for the former Garnett tutor. However one still has to think that some of the decision regarding his future with the club will depend on how the team does in the playoffs...and how it closes out the regular season.

Therefore, let’s get to tonight’s game - Pistons vs. Raps live at the Air Canada Centre.

This is the first of two games against Detroit for the Raptors, both which could have a huge impact on the final Eastern Conference playoff seedings not to mention the Raptors’ own mentality going into the playoffs. A split or two wins would be an enormous confidence boost for this club and not that it’s lacking any confidence at the moment, but it would be a statement that yes, this team is ready to compete with anyone in the East.

So how do you beat Detroit?

Here are the HQ’s three keys to tonight’s game:

1. Get Bosh Going Early and Often Last time these teams met, Rasheed Wallace and the Pistons’ front-court neutralized CB4, effectively grinding Toronto’s offence to a halt and turning the Raptors into a jump-shooting club. The Raptors have to get Bosh touches early in the game and Bosh himself needs to aggressively attack the Pistons defence. This doesn’t necessarily mean he needs to force shots, but if he can cause the Pistons to collapse or double down on him, then this plays right into the Raptors’ motion offense. I truly feel tonight that if CB4 has a dominant performance, the Raps will be in good shape.

2. The Battle of the Boards The Pistons are typically viewed as one of the top rebounding teams in the league thanks to their collection of front-court players. They are a top 10 offensive rebounding club, thriving off of garbage baskets and put-backs, however they rank only 19th overall in total rebounds per game and aren’t the window washers they were last year when Ben Wallace was still in tow. The point here is that last time these clubs played, the Raptors seemed intimidated by the new version of the Bad Boys and were out-rebounded 42 to 34. There’s no reason for Toronto not to be able to compete on the glass tonight
and if they do, this could be the proverbial tipping point in terms of walking away with a victory.

3. Point Guard Play The Pistons may be without Chauncey Billups who banged his knee in Detroit’s last game against Orlando but regardless of his status, I’m going to be focusing in on TJ Ford and Jose Calderon tonight. Ford had a solid game last time he and Chauncey Billups went face to face but both Raps’ QB’s need to be on point tomorrow night to shred the vaunted Pistons’ D. Yes Mitchell’s coaching and the play of Toronto’s bench will be important, but I think moreso, if TJ and Jose are getting into the paint and making good decisions with the ball, this really takes pressure off Bosh, spreads the court and allows Toronto to play at its best.

It should be a good test for both clubs provided the Pistons don’t try and rest any players. A win coupled with a Miami loss would clinch the third spot overall in the East for the Raps and while it sounds like Andrea Bargnani’s still a few games away from a return, with the way this team has been clicking as of late, I’m not sure they can’t afford to let him rest up a bit longer so he’s primed for round 1.