The Winds of Change

Share All sharing options for: The Winds of Change 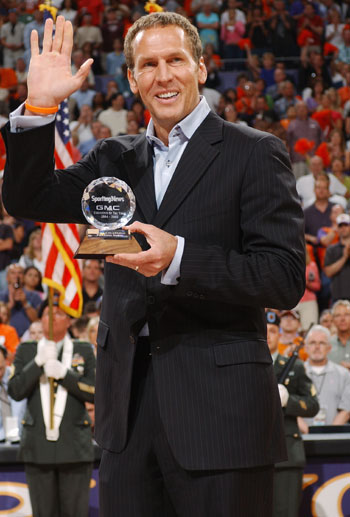 This morning I attempted to get tickets to the first two Raptors’ playoff games. At 10:00 AM, I set up shop online and prepared to pay ticketmaster’s egregious fees for a shot at something that the majority of us on this site have waited for for what seems like an eternity.

To my dismay, not a single ticket was to be had.

I find it hard to believe that the Raptors’ season ticket holders bought up all of the near 20,000 ACC seats available but try as I did, I was relegated to "stubhubbing" it for Sprite Zone seats.

Immediately afterward I couldn’t help but be a bit frustrated at my lack of success getting tickets. I mean if Raptors.com insiders were unable to get tickets, how was the general public going to get a crack at some playoff action?

Interestingly, the experience made me think back to the previous evening.

After finishing up the course I had been taking at Ryerson University, our instructor, the sagacious DB Scott, took our class to a local pub to properly wrap things up. Upon entering the bar I noticed that all of the televisions in the place were showing the Jays against the Royals instead of the Raptors taking on the Timberwolves.

"Here we go again" I thought to myself. "No Leafs so instead, we’ve gotta watch game 5 of 555 in the baseball season instead of watching a Raptor team fighting for playoff seeding amongst the NBA’s top clubs!" Yes, if you were within earshot you would have heard my usual anti-local media rant begin.

However to my surprise, one of the local pub dwellers interrupted my train of thought with a resounding: "hey, the Raps game’s on in the other room...on the big screen. I’ve been running back and forth to check the score and they’re only down by four!"

Woah. Now this wasn’t what I expected. The big screen?

I wandered down to the back and sure enough, there was the game and a handful of people gathered around it talking Raps ball and playoff implications. The crowd was small but the whole scene brought a smile to my face.

And got me thinking.

Was what I was witnessing a glimpse of things to come for the Raptors?

Was the tide slowly starting to turn in this city of die-hard hockey stick wielders?

And going back to this morning, were the assumed mass sales of Raptors’ playoff tickets another indication that things were looking up for the franchise beyond their recent on-court play?

For as long as I can remember, no matter how successful this team has been in the NBA standings and even at the gate, the pundits love to point to the television numbers. Even in the midst of their Eastern Conference best record since the start of the new year, the local media was quick to point out that the Raps’ television numbers were somewhere around the area of swimming and university hockey.

Yes, that sounds pretty bad. But considering Toronto’s attendance this season is 13th overall in the league at an average of 18,136, a number that has steadily been growing as the season has progressed, it looks like a ripple effect is beginning to take place.

Hell, even the local media which we vilify so often here at the HQ is showing sings of ever so slowly switching gears. Dave Feschuk, the journalist for the Toronto Star who has exuded negativity concerning the Raptors for the past few years, has switched to castigating the Leafs as of late. Seems like Bryan Colangelo’s success is drying up all his subject matter.

And south of the border, things just keep getting more and more interesting as the playoffs draw near. This morning on ESPN.com much of their Daily dime was spent discussing the Raptors and how they may be the "most complete team" in the East that no one really wants to face. Judging by the performance a Shaq-less Heat put on last night against the Bobcats, who am I to argue?

On top of this, Henry Abbott at True Hoop, who did the introduction to the Dime Magazine NBA season preview we participated in, has recently been discussing the Raptors’ surprising season as well.

For those of us long-suffering fans, it’s great to see this kind of exposure.

Coverage of the team has traditionally been wedged somewhere between curling and the Toronto Rock. The Raptors’ performance in their brief tenure, the hockey history of the city and even it’s baseball legacy have all lead to this "weding" and it’s no real surprise as to why the Raptors are still struggling to compete with the likes of swimming.

Last night Chris Bosh threw out the first pitch at the Jays’ game and apparently the whole Raptors’ team had a box at the Rogers Centre. Increased exposure such as this is great for the team, and hopefully a trip to the playoffs will really get the ball rolling.

So maybe I didn’t get the tickets I wanted for the playoffs.

And maybe MLSE will yet again next season put far too many games on RaptorsTV.

But if in the end that means a larger audience, league-wide respect and (GASP) some games on TNT next season, I’m more than willing to put up with some short-term pain for long-term gain.

Move over Lakers, step aside Suns, here come the Raptors.