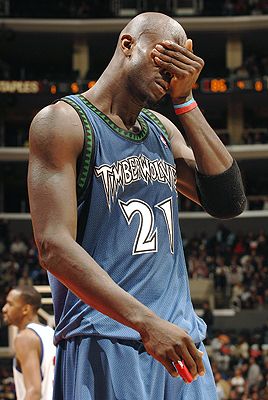 Last night’s 111 to 100 comeback victory over Minnesota, marked the Raptors 45th win of the season and with four games remaining, gave Toronto have a good chance to at least tie their franchise record for wins in a single season.

Toronto looked a bit fatigued to begin the game and struggled to make some open shots but dug down deep when it counted in the fourth quarter to come away with the win.

As I watched the game’s conclusion I noted that Mike James was nowhere to be found. Randy Foye was running the show and it made me once again shake my head in confusion as to why the Timberwolves, after drafting Foye, had signed James in the first place?! The players are almost mirror images of each other and it’s obvious that Foye is the future of this club...regardless of the fact that James still has two years and an option (which he’ll surely exercise) left.

The whole situation made me think about James too. You see it so often in the NBA, a player has success with a team, yet leaves to seek a higher pay cheque only to sacrifice personal success. Not that Toronto would have kept James around even if he had wanted to stay, but you gotta wonder what was going through Mr. Space Mountain James’ head as the Raps walked off the court with a win leaving them fighting for second place in the Eastern Conference; while Mike’s T-Wolves were tied with the moribund Knicks for the 10th worst record in the league. In fact it’s gotten to the point in Minny where it’s advantageous for them to keep losing.

Thanks to the rather one-sided trade that saw the Wolves send Sam Cassell to the Clippers, Minnesota owes its first round-pick to LA if they don’t finish with one of the 10 worst records (pick is top 10 protected through 2010.) And if Minnesota doesn’t have a selection this year, considering their cap situation it’s going to be very hard to improve this club. Therefore James might find himself trapped coming off the bench for a perennial lottery team, one that might not even have a lottery pick.

No, I’m sure this isn’t exactly the vision he had in mind when he signed with Minnesota this past off-season.

However I don’t think James, like any of us, could have predicted the Raptors’ dominance this season either, or the extent of this team’s depth.

It was once again the depth that got Toronto over the hump last night with six Raptors scoring in double figures.

Toronto was led by their point guards, TJ Ford and Jose Calderon, both of whom played exceptionally well and kudos to Sam Mitchell for riding the hot hand in each instance en route to the eventual victory.

Minnesota started the game strong thanks to a scorching offensive performance by Ricky Davis and some solid rebounding but by the time the fourth quarter hit, the Raptors perimeter shots started falling and the Raptors ended up out-rebounding the Timberwolves decisively to snatch back the W.

The aforementioned James finished with 11 points on five of 10 shooting but just didn’t look as comfortable in this offense. With the Raptors, James could use Bosh’s superior outside stroke to effectively run the pick and roll but in their current system, the Wolves run a lot of isolation plays and James is relegated to being a post-feeder and long-range gunner. Only once do I recall him getting to the rim last night in traffic, and when he did, he missed the lay-up!

But above all else last night, I could not for the life of me understand Minnesota’s defense in the fourth quarter. Why they stayed in a zone formation while Toronto was raining down 3’s was beyond me but on top of this, it had to be the worst execution of a zone that I’ve seen all year!

One play in particular epitomized this.

Calderon found Parker for a look in the corner and while Parker failed to convert, Toronto got the rebound, reset the offense, and with only eight seconds gone on the shot clock, Calderon went right back to Parker, who was wide open, for the exact same shot.

In contrast, Toronto was much quicker on rotations in the fourth, especially trapping players along the baseline and by the game’s conclusion had forced KG into an ugly seven for 23 shooting night.

The Raps now have a nice break before maybe their best test of the season considering their play of late. Two matches with the Pistons loom on the horizon starting with a match this Friday. Andrea Bargnani looks to be returning for that match and it will be interesting to see how Sam Mitchell re-orients him to the line-up, especially considering how well Kilo-Graham and Kris Humphries have been playing with increased minutes. At one point after the win against the Bulls I even wondered if Mitchell should mess with the line-up at all given the chemistry that’s apparent in the current rotations.

However even last night’s win there were still many areas that Toronto can improve in, and a number of these in which Il Mago could help.

No, I’m wondering if instead of thinking about his team’s final period collapse, he’s pondering what could have been as he watches his former club march towards the playoffs...