Share All sharing options for: Jump Ball – The Mitchell Conundrum 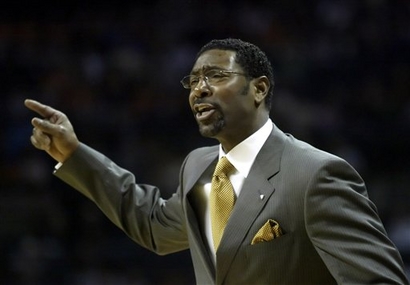 A lot of talk has gone on this season about coach Sam Mitchell and whether or not he'll be retained come season's end. On one side, he appears to be a coach of the year candidate and on the other, the team still struggles at times with the "X's and O's"…

Franchise: I'm going to set this off by saying that I have no idea how GM Bryan Colangelo can not give Sam a new contract after the season.

He's proven that with more talent, he can take this team where in previous years, it could not go.

Howland: Well on the flip side Colangelo has done a ton of stuff that was mind boggling at the time it was done, but has worked out. He traded CV Smooth, he drafted Bargnani, and brought over a bunch of guys with little or no experience. What does this tell us? No-one can have any idea how or why Colangelo could let Mitchell walk when his contract runs out, but he may just do that. The thing with BC is that if he thinks another coach is out there who can make the team better, he will not hesitate to make the move.

That's why there is no talk about an extension yet. BC is going to wait it out until he has to make the decision, look at what is around and then make the best decision for the club in his mind.

You just get the feeling that Colangelo is the kind of guy that will do whatever it takes to win.

Franchise: Ok, so I suppose the next logical question then is, who else is out there to choose from?

Howland: Well here is where he may have a hard time selling a move to the fan base as there aren’t a lot of big names out there…

Franchise: Hmm...but the TJ Ford trade like you said was also a hard sell. Give me some options on coaches who are available?

Howland: hmmm...obviously Iavaroni, also Adelman, and perhaps even some Euroleague coach we’re not very familiar with like David Blatt.

Franchise: But is there anyone in particular you'd like to see coach this team? I mean, if you're going to say that Sam's services shouldn't be retained, then who steps in, Leo Rautins?

Howland: I was thinking of hiring the whole RapsTV crew, together they would share the basketball knowledge of Don Cherry.

In all seriousness you have to look at this team and see where it is deficient. Defence? - although part of that is preparing your players. How about X's and O's on a whole? Sam is weak there as well. Guys that immediately come to mind for me are Stan van Gundy and Rick Adelman. Both have had good experience in the league and Adelman has been around Euro players and teams with similar talent levels.

You can't tell me that Sam has done no wrong here.

Franchise: No, but you can't tell me Adelman is the solution either. His Sacramento teams may have played LESS defence than the current Raptors!

I think part of this comes down to Colangelo's patience. Mitchell is a young coach. Just like some of his players, he's still learning the ropes and improving but looks to have the makings of a solid NBA head coach. I'd argue that your assistants should be your X and O guys at this level while your head coach should be the best communicator. I think Sam does a great job of this and has his players’ respect. So perhaps Colangelo needs to bring in some more defensive minded assistants like Virginia's John Beilein?

Does that put an end to the entertaining Jim Todd halftime interviews? Perhaps. But I just don't see anyone out there right now who you can safely say is a better pick than Sam. Iavoroni? That seems more of a "grass is greener on the other side" type of solution...

Howland: Yeah I can't really say Iavoroni would be better than Sam in helping this team reach its potential. But really, potential is what it is all about. Colangelo has to look at this team and ask, "Who is the best coach for helping our young team develop into a title contender?" A green coach with green players just doesn't seem like the best idea. Sure Mitchell has his good points, in particular that the guys seem to like him, but what else can they learn from him other than bring a lunch pail to work everyday?

Mitchell is still learning and I think Colangelo would like to have someone in charge that can teach and still have the players respect.

Besides Mitchell is basically one of the last parts of the Babcock regime that has not been totally removed.

Franchise: Right...so I guess Chris Bosh is on the way out the door next...

The tricky thing here is that obviously Colangelo is happy with the job Sam's done...otherwise he would have been gone a while ago.

And if BC offers Sam anything less than a three-year deal, it's a slap in the face. It would be like saying to a girl who you just went on a date with: "well, you're pretty hot...but I still think I can do better."

BC has made a few tough moves so far so I don't see him hesitating in removing Mitchell if he feels that's the best option. But right now based on the improvement this team has made, how seamlessly the new players have fit together, the improved defence, (cough, for the most part with the exception of these past few games) the growth of the team (Bosh continues to improve under Mitchell - something paramount to the team's success) and Mitchell's ability to relate and communicate - he should be rewarded with a new deal at season's end.

Howland: I agree that if you extend a new contract it has to be for a minimum of three years. I said this a while ago and I will say it again, in my mind it comes down to the playoffs and how the Raps perform. The thing that makes this decision really tough is that it is impossible to evaluate how much Sam has developed as a coach this year. The talent that he has to coach is so much better than last year that maybe the swing in fortune is simply a result of better players and has nothing to do with better coaching. It is possible that with a more experienced coach that this team would be even further ahead of the curve!

Franchise: That's a scary thought considering how much better the team is already - but you make a good point nonetheless.

Jack Armstrong was talking coach of the year candidates tonight on RapsTV and it made me think of the award, and then coaching as a whole. Judging coaches is somewhat subjective.

Would the Mavs still be creaming the league if Sam Mitchell was their head coach and had been in that system for a few years?

Dallas certainly has the talent...

And take the Nets.

I truly believe that Lawrence Frank is an amazing coach...but how does that team, injuries or no injuries, have that poor a record?

I think that in the end Sam's shown the improvement to warrant a new contract. His rotation decisions have been 90 times less upsetting to me this year, Toronto usually runs great plays out of time-outs this season as opposed to last (except when TJ decides to go one on five) and these things to me add up to an improving coach who is the best suited candidate for this club going forward.

Sure Iavoroni has all the buzz...

...but so did numerous other coaches who've since come and gone in the league…

Howland: I completely agree that evaluating coaching is subjective. Guys who I think have done a great job this year are Phil Jackson, Jeff Van Gundy and believe it or not Terry Stotts. I guess at the end of the day I think there will likely be better coaches available who would love to coach this team. Mitchell has been solid, but why not try and get someone even better? What that is? That's hard to say but I believe that when push comes to shove, Colangelo will seek out someone with experience.

Mitchell doesn't have that right now and I wonder if that won't come back to bite the team in the end. I realize it sounds like an argument you hear when you don't get a job, "We are looking for more experience" and of course the only way to get that experience is to get the job, but that's reality.

Franchise: Man, you've been through some tough job interviews haven’t you?

Well obviously we’re not going to agree on this topic. And I’m definitely not going to go along with the whole "we'll see how things go in the playoffs" rationale. Of all the arguments to base a "keep or let Sam go" decision on, is the stupidest of them all. Sam Mitchell has never been the head coach of an NBA playoff team before so what are you measuring him against? Not to mention, neither have his players for the most part so if they don't perform and the team folds in Round 1, does that necessarily mean that Mitchell has to go? Of course not.

Instead, I think BC makes a decision based on his gut. If he truly feels there's someone else out there who can do an even better job with this club, regardless of the team's improvement and Sam's job this year, well that's the bottom line. And based on the job Colangelo has done so far, I can live with that.

Howland: I actually agree with that. My gut tells me there are better coaches for this team out there and I think in the end Colangelo’s will too.