Share All sharing options for: Tip-In: Feast or Famine 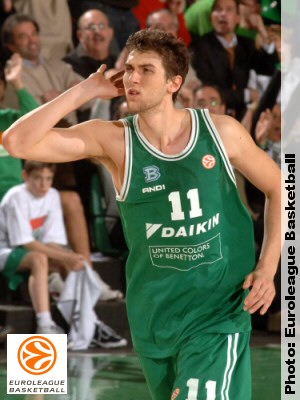 Everyone back on the Raptorwagon now?

Better yet, when is Toronto going to play a normal game?

Unbelievably, the Raps last six games have been blowouts of one type or another and final score aside, last night’s 94-87 victory over the Grizzlies was no exception.

Chris Bosh led the Raps with 19 points and nine rebounds and Andrea Bargnani had fans yelling REEEEEEWIND at some of his moves as he poured in 18 as well.

But let’s take this back to yesterday’s recap.

I was extremely disappointed in the effort put forth by Toronto in their loss to Washington on Tuesday but by no means was I saying that the team was terrible and that they were lottery bound. Toronto simply wasn’t playing the way they were capable of playing and as a viewer and fan, this was extremely frustrating.

Last night’s win over Memphis snapped Toronto’s three-game losing streak, but I’m not going to sit here and type that things are back on track...because last night’s match still featured some head-scratching decisions by the Raptors and had they been playing anyone but Memphis, I’m not so sure we wouldn’t be talking about how to break a four game losing streak.

Worst in the league?

They turned the ball over 21 times and aside from Mike Miller, (who promptly started lighting Toronto up when Chuck Swirsky declared he was "having an off night")and at times Pau Gasol and Rudy Gay, Memphis really didn’t get much in the line of offensive contributions.

Now was this due to Toronto’s defence?

As a fan I’d like to say so, I mean the Raptors were holding the Grizz to under 40 per cent shooting from the field prior to garbage time, however poor shot selection, lack of effort and turnovers as previously mentioned, all played a major part in Memphis’ inability to score.

Did I just throw lack of effort in there? Sure did and one play in particular stands out in my mind which best exemplifies this passivity. During the second quarter, Memphis point guard Damon Stoudamire threw an errant pass to Pau Gasol and as the ball slipped through his fingers and out of bounds, the entire team simply stood and watched as Toronto regained possession. I actually laughed out loud in that instance and there were numerous other moments when it looked like Memphis was happy to just play through the rest of the season and take a shot at Oden or Durant come June.

And therefore while last night’s victory got Toronto back in the win column, there is still work to be done.

Toronto was out-rebounded once again and started off allowing the Grizzlies to go up 10-0. Maybe Toronto can do this against a team like Memphis, but say a Detroit or Cleveland? That’s too big of a hole to chance it. And the way in which they got down was inexcusable. Not once, but twiceTJ Ford left Mike Miller to double on Gasol. Gasol had hardly shown at that point that Bosh couldn’t handle him so why on earth would you double to leave one of the league’s best long-range bombers wide open? Miller promptly splashed both open shots in and I was left shaking my head.

It’s these types of errors and decisions that Toronto has been making in abundance as of late and the Raptors need to sharpen their focus for the remainder of the season.

In fact I’ve felt that the two best players on the Raptors these past few games have been two of their newest, Andrea Bargnani and Juan Dixon. Dixon had another solid game as a starter and while he did force one jump-shot last night, overall he’s been a pleasant surprise picking his shots in the flow of the offence, hounding players on D and driving aggressively to the basket. Dixon was six of nine last night for 17 points while also grabbing five boards and notching two steals and it seems that Mitchell currently has more confidence in Dixon than Mo Pete as Peterson played only 20 minutes last night, six less than Joey Graham.

There’s still no word on when Anthony Parker will return but Toronto can’t get caught up in the waiting game. A dangerous Seattle team awaits on Sunday and if the Raptors don’t do a better job of taking care of the little things, especially on the defensive end of the court, then come Monday we might be having another recap like yesterday’s.