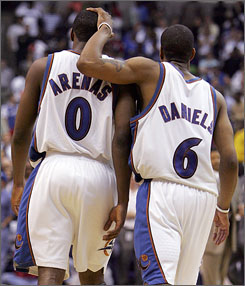 It was at the 4:44 mark of the third quarter that Toronto had their first good defensive possession resulting in a Washington turnover...

...only Chris Bosh was called for a moving screen on the other end and the ball went right back to Washington.

I singled-out this sequence as to me it was the epitome of Toronto’s play last night in a ghastly 129-109 loss to the Washington Wizards.

In fact, I think ghastly is too nice a word...how about embarrassing.

Because as an avid Raptors fan, that’s how I felt watching them play last night.

There was absolutely no excuse for Toronto to get blown out this badly. They shot almost 52 per cent from the field, went to the line 30 times converting on 25 of them, and only took 14 long-range bombs. Normally those are the types of numbers we see in a Toronto win...but that’s only when they play some semblance of defence.

And for that reason, the Raptors had lost last night’s game before the game's second quarter was five minutes old. Not only could Toronto not stop Washington, but they made countless small errors that resulted in easy baskets for the Wizards. Sure the Raps miss Anthony Parker...but give me a break;

He didn’t dribble the ball out of bounds on a baseline cut as Calderon did in the second quarter.

He didn’t pass the ball behind his teammate’s back resulting in a turnover to end the half as TJ Ford did.

And Parker sure as hell wouldn’t have grabbed 22 rebounds to make up the rebounding differential!

The fact is this was a complete lack of team focus and at times, Toronto looked like they were running around aimlessly simply chasing Washington to spots on the floor. And this was true of the rebounding disparity as well as time after time I saw Raptor players jumping for loose balls instead of establishing position and boxing out. I actually thought Toronto’s best rebounder last night was none other than Uros Slokar who had three rebounds in only five minutes of garbage time. It’s no wonder then that by the third quarter I was screaming at the TV for Sam Mitchell to make some dramatic lineup changes. Maybe then a 49 to 27 pounding on the boards wouldn’t have occurred.

But back to my screaming.

I was so livid that I couldn’t even write this recap last night.

By the time Howland called me to check on the game after work, I was ready to start Slokar over Bosh, send Mo Pete to the D League with PJ Tucker and send Joey Graham as far as physically possible away from the NBA. There was simply no excuse for this type of performance. If Toronto had even played one iota of defense they could have taken this game. Washington executed their sets to perfection and got some unlikely contributions (Antonio Daniels had 18 off the bench for Washington and hit seven of his nine shots) to buoy their team but Toronto was still basically scoring at will when they remembered how to make lay-ups.

And this was my final frustration last night. There’s been all this talk of "ok, now we’re in the second half of the season, it’s gonna be different for the teams competing for playoff spots, blah, blah, blah..."yet Toronto took themselves out of the game last night by missing lay-ups and easy dunks, making poor decisions with the ball (they had 16 turnovers for their 21 assists) and committing completely needless fouls. Best example? – end of the third quarter, four seconds on the shot clock, ball in Gilbert Arenas’ hands at the top of the key. Well you know Mr. Hibache is gonna throw it up from long range.

SO WHY DO YOU CROWD HIM SO MUCH THAT YOU FOUL HIM WHEN HE SHOOTS? JOEY? HELLO? I COULD HAVE GUARDED GILBERT ON THAT PLAY AND NOT COMMITTED THE FOUL!!!

If Toronto insists on this type of focus from here on out, they’ll be lucky to make the playoffs let alone win the division. The Knicks saw a heroic fourth quarter come-back fall one point short to Seattle last night but this team is playing the best ball of anyone in the Atlantic as of now and Toronto needs to get back on the winning track starting tonight against Memphis.

"Sometimes they just don't come your way," Bosh said. "And if you don't block out as a team, you can't rebound. Nobody can. I can say I'm going to go and get every rebound, but if I have to get a rebound on three guys, I'm sure they have the advantage."

To me that sure sounds like a player who’s not impressed with his teammates and the Raptors have to get a complete team effort tonight to avoid this sort of reoccurrence. Simply put, Toronto has to win this game.

Because if what looked like an easy match against Washington and an even easier contest against the Grizz end up in losses due to lack of defense and focus, how is Toronto going to do against a high-scoring Seattle, a Milwaukee team that just pounded them and the surprising Knicks?

I for one think Toronto comes out of this mini tailspin tonight. I’m hoping Sam Mitchell gave the post-game locker room speech of his career so far last night and that Toronto responds this evening with a win. Another poor performance this evening would not just be the team’s fifth loss in its last six games...it would severely undercut all the recent hype and goodwill surrounding the team both locally and abroad.

And that’s the last thing this Raptor fan wants.