Share All sharing options for: Game-Day Preview - Raptors vs. Wizards 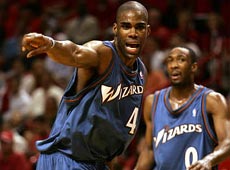 "At least we don’t have Ron Artest."

I guess that’s what my answer will be if Toronto inexplicably loses the next two games against Washington and Memphis...because there won’t be much more to say. Toronto has lost three of their last four and all three of these losses were hardly close. Losing another two would be reason for all of the Marty York's out there to start to gloat.

So is this recent string really just a blip on the radar?

I’m not sure as of yet but what I do know is that teams are really starting to focus in on stopping Chris Bosh. Bosh himself is acknowledging this fact and in the past few games we’ve seen just how stale Toronto’s offence can be if CB4 is rendered ineffective. For Toronto to get back to its previous winning ways, the team needs to start hitting open shots resulting from the increased attention to CB4 and in addition, I truly believe that Bosh himself needs to be more aggressive offensively.

I’m not looking for wild, forced shots. But I think Chris needs to establish deeper position in the post early-on therefore giving him more options closer to the hoop and hopefully the ability to make his move prior to help arriving. Without going into too many X’s and O’s, this also means that Toronto’s point guards need to get him the ball early in the shot clock as well. In the past few matches, teams have been loading up CB4’s side of the paint and forcing him to catch the ball further and further out. If you remember against Milwaukee, Bosh was sometimes getting the ball as far out as the three-point line and being dared to shoot. (Which he did on occasion I might add...)

This is not how Toronto’s offence is most efficient and without their best shooter in Anthony Parker, (who is listed as a game-time decision but who I don’t expect to see play) the Raptors need to start attacking the weak side of the opposing team’s defence by swinging the ball if Bosh is being crowded.

And this task should become a bit easier tonight with the return of Andrea Bargnani (weather permitting.) Bargnani was Toronto’s best player offensively against the Cavs and his quickness considering his size should present a huge mismatch tonight against the Wizards. I’m hoping that Sam Mitchell and co. instruct Bargnani and the likes of Morris Peterson and Juan Dixon to attack the basket when the ball gets swung to their side rather than settle for jump shots.

Speaking of Peterson, Toronto really needs him to take on more of a scoring role with Parker out. Peterson had his looks last game but simply couldn’t connect. However I’d like to see more plays run for Peterson resulting in curls to the basket and the like. If Toronto can get him going early than this will force the Wizards to hesitate in playing Bosh so close. Peterson was ranked at number 15 recently on John Hollinger’s list of this off-season’s top free agents for ESPN.com.

"Of the three long-range specialists (Peterson, Matt Carroll and Jason Kapono) who figure to get paid this summer, Peterson is the worst shooter and the best basketball player. I can't provide a good explanation for why he lost his starting job in Toronto, but his performance hasn't fallen off one iota and, at 29, he figures to stick around for a while. He could be a good value on a three-year deal around the midlevel."

While lately Mo Pete’s play would run contradictory to this statement, I do think that he’s still adjusting to his starting role offensively and is due for a big game. It will be imperative for he and Toronto’s other wings to be able to hit their shots tonight as considering how lax Washington’s defence tends to be, they should have plenty of opportunities.

Therefore looking at tonight’s game, here are my three keys:

1) Intensity: Toronto has looked at least a step if not two steps slow the past few games. Fatigue, injuries or simply the frigid weather could all be responsible but whatever the case, Toronto needs to ratchet things up another level this evening. Washington is but one win ahead of Toronto in the standings and therefore tonight’s game would get Toronto to within striking distance of the third spot in the conference. It would also give Toronto a decisive 3-0 advantage in the series which bodes well for playoff tie-breakers if it comes to that. Therefore the Raptors shouldn’t need any more excuses to be "up" for this contest and I’m expecting Toronto to come out gunz blazing. This means not only on the offensive end, but also defensively where limiting the big three of Butler, Jamison and Agent Zero will be paramount.

2) Chris Bosh: While Bosh finished with decent numbers in the past game he hasn’t been his dominant self in almost a week now. For a player who ESPN.com analyst Greg Anthony recently labelled "the most complete player in the entire division," Bosh has underperformed as of late and while his team-mates share in the blame for their past few losses, CB4, as the leader of this club, needs to have exert control over tonight’s game in order for Toronto to have its best shot at winning. With Brendan Haywood’s status in question tonight due to back spasms, the Wizards would be forced to use a combination of Antawn Jamison, Darius Songaila, Etan Thomas and maybe even Andre Blatche on Bosh. In other words, Bosh should be able to have his way with Washington tonight.

3) Bench Play: Besides an overall lack of intensity, Toronto hasn’t gotten a full contribution from its bench as of late. Juan Dixon has been solid, Kris Humphries (who was apparently almost dealt to Minnesota for Eddie Griffin near the trade deadline!) has given Toronto a nice lift but Calderon, Graham and even starter Garbajosa haven’t been able to set the tone offensively and this has forced Bargnani to carry more of the scoring load than perhaps Sam Mitchell would like. Washington on the other side has one of the shallowest benches in the league and therefore even if Butler, Jamison and Arenas each score over 20 points, Toronto can come out with a victory (as they did in their 116-111 Jan 7th win) provided they keep the Wizards' bench in check. Toronto will be without PJ Tucker who was re-assigned to the D League yesterday, but I wouldn't be surprised to see either Pape Sow or Uros Slokar for brief periods tonight. A battle of the peripheral players seems to favour Toronto on paper but if the Raptors want to head back to the ACC to face the Grizz coming off a win, they'll need to make sure that they get a full team effort tonight.