Share All sharing options for: Tip-In: All the King's men.... 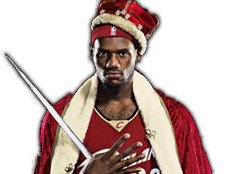 When I think of the Cleveland Cavaliers I think of Lebron James holding a "Help Wanted" sign. The Cavs are 34-25 and there is some talent on that roster, but truth be told that team really is a one man show. Without #23 this team would look no different from the Cavs during the pre-James era....they would SUCK. Drew Gooden is average, the big Z seems to have lost his role on this squad, Larry Hughes who is arguably their second best player cannot stay healthy, and the rest of the roster is made up of players who on occasion can contribute or are simply to young and inexperienced.

Then I watched last night’s dismantling of the Toronto Raptors and I couldn’t help but think that maybe it’s not that James doesn’t have help.....he just doesn’t have consistent help. The sign that James should be holding is "CONSISTENT Help Wanted".

In putting a short-handed Raptors team to bed early in the third quarter, the Cavs got solid contributions from a number of players on the floor outside of James and his 36 point, 6 assist, 5 rebound, 3 block performance. Larry Hughes looked like he was back in Washington playing for a contract, Varajeo continued to play his best ball against the Raps with a double-double, Donyell Marshall found his groove and even former Michigan St. alum Shannon Brown managed to put up some numbers.

When James gets at least a little bit of help this team looks quite good. Add in some tired looking and weak defense by the Raps and what you get is a 120-97 blow-out loss. Oh the defense...or lack thereof.

The Raps just looked a step slow all night. Rotations were late, close-outs we almost non-existent, and generally the team looked a little lax out there. It also didn’t help that the open shots were falling for the Cavs, in particular behind the arc where they went 12-22. This ability to hit from outside for the Cavs also managed to open things up for Lebron who took advantage of every opportunity and willed himself to the free-throw line 17 times.

Now most people will quickly point out the fact that Anthony Parker is missing and he is a key element to the Raps D. I agree that we miss AP but is there no-one else on this so-called deep roster who can step up their defensive intensity? Was it that long ago that Jeoy Graham played James tough early in the season at the ACC? The Raps cannot be that reliant on one guy to be an average defensive team. Is the team better with Parker? You bet. Should they be this bad without him? No-way. There was a lack of intensity shown by the team last night. There was also a bit of questionable coaching. Juan Dixon on Lebron with little or no help coming? That doesn’t make much sense to me.

Dixon, although abused on the defensive end, was Toronto’s best offensive weapon on this night and went 10-18 from the floor for 24 points. Juan showed that he can score anywhere from the floor, inside, mid-range and beyond the arc and if he keeps this up the fact that Fred Jones was ever a Raptor will be the answer to a random NTN trivia question. Leo Rautins kept harping on the fact that Dixon was getting his in the flow of the offence. At times last night that seemed a little contrived (and probably inspired by the fact that it is becoming increasingly obvious that he has no time for Joey Graham, or any uber athletic player not lighting the place on fire), but when the shots are falling you do have to keep feeding the hot hand.

Outside of Juan the only other player to bring his A game was Humphries who in just 14 minutes scored 12 points and was banging around down on the block. Unfortunately he got himself into a little foul trouble. Of course with Bosh on the squad one wouldn’t think that Humph getting into foul trouble would be that much of an issue but Bosh quickly tired over the course of the game. Early on CB4 was going to the glass hard, almost heroically, in what looked like a 1 on 4 match-up each time. As the game progressed though, Bosh tired as evidenced by his willingness to settle for outside jumper after outside jumper...including an airball from 3 point-land.

But what about the rest of the squad you ask? The PG duo of Ford and Calderon had a tough time. The Cavs were using Hughes and James at the point for most of the night making it very difficult for either of the two to get on track either offensively or defensively. Garbo pulled a disappearing act, and Mo Pete struggled again. In fact in the third quarter I felt like I was watching last years squad. Sure the names were different on the backs of the jersey’s but it felt like they were just holding on in the first half and then were destroyed in the third quarter, never to rebound.

So after losing two in a row what now? Well first off no more performances that remind anyone of last years team, and secondly to get back on the winning side of things ASAP. That is exactly what Mitchell wants as well giving the team a day off to forget about the last two games. The Raps have been resilient all year and need to continue to show they are a team that will bend but not break. If the team can get through the next 10 games over .500 then they should be in a pretty good place for locking up the Atlantic even though Richard Jefferson is soon to give a much needed boost to a Nets squad who could still put some heat on Toronto's Atlantic Division leader.