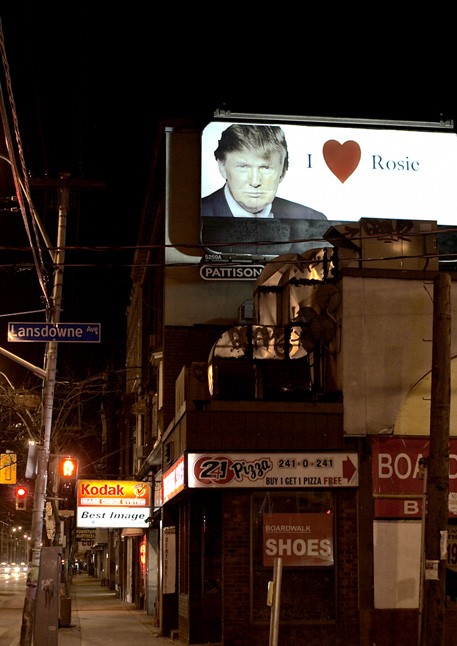 A few days ago my friend Josh forwarded me the following link containing the latest in the line of a friend of his’ billboard work here in Toronto.

At first I thought it was simply a photo "chopped and screwed" version of the Learning Annex billboards so prominent in the Metro area over the past month or so. However after consulting with Josh he informed me that nope, his friend Dan had in fact actually altered the signs creating what one can only describe as an urban masterpiece of humour!

Aside from being incredibly impressed with the ingenuity of the re-crafted signs, I was also struck by how quickly I had assumed that the photos were not of a "real" sign but simply an altered computer image. Have I spent too much time in the nexus of PSII? Was it due to the fact that "the Donald" was involved that I automatically discounted these creations?

I found myself having similar thoughts watching last night’s Raptors game against the Miami Heat.

Entering action last night the Heat had won 11 of their last 15 games.

Even without Dwyane Wade they seemed to be pressing forward towards a solid playoff seeding in the East and had sports’ writers uttering things like "look out, here comes Miami."

Was this due to Shaq’s return?

How about the rejuvenation of Pat Riley?

Admittedly prior to last night's game, I too thought that Miami was simply a sleeping giant who had their collective alarm clocks finally sound. I had seen through various highlights the rebirth of Shaq, the 'Toine wiggle, GP back to his trash-talking ways and thought "woah this team is going to be a force come playoff-time."

However after watching them implode offensively last weekend against the Pacers I started to question this. Much like the doctored Learning Annex billboards, was I seeing a photo-shopped Miami team, one playing sub-par competition and making use of the emotional boost provided by the Diesel and Riles’ returns to make their run?

After witnessing the Heat’s offensive execution last night in Toronto’s decisive 93-83 victory, I'm now even more convinced that this Miami team is not what it appears.

The names Payton, Walker and Mourning all sound impressive but does that equate to on-court success?

Yes, they have Shaq, but without Jason Kapono (who knew he’d be one of this club’s MVP’s) they have horrid shooting from the perimeter and no one able to get to the rim.

If the Raptors hadn’t struggled to hit shots in the second part of the third quarter and much of the fourth, this game would have ended much like that of Denver last Friday, an enormous Raptors’ blow-out. I actually thought Toronto played a better first half last night than they did against Denver simply because the Raptors not only badly outscored the Heat, but considering the Heat have players like Shaq and Udonis Haslem, Toronto also destroyed them on the glass. I mean 53 to 35 including the Raptors grabbing 16 offensive rebounds? The two Chris’ were huge in this department with Bosh grabbing 18 rebounds himself and Kris Humphries locking in on 10. Humphries might in fact have been the game-changer last night as seven of his rebounds were of the offensive variety and between steals and a huge block early in the game, his play set the tone for the team.

As Leo Rautins alluded to on numerous occasions last night it was a total team effort with Toronto’s guards mixing it up on the boards (seriously, Juan Dixon had seven rebounds himself) and spreading the scoring wealth (Toronto had six players in double figures scoring-wise.)

The Raptors ball movement was crisp and led to open shot after open shot and even when they weren’t knocking them down later in the game, the team was getting back on defence or going after offensive rebounds.

This game also featured some zany plays such as Morris Peterson’s free throw that spun around the ACC iron for an eternity (and was probably the strangest foul shot I’ve ever seen) and Peterson taking the ball off his mug thanks to Dorell Wright’s attempt to retain Miami’s possession. Peterson had one of his better games as of late pumping in 11 points in only 14 minutes of action however he shot only three of 10 from the field and to me still does not look to be in game-shape.

Thankfully Anthony Parker certainly does and last night’s game made me think of another hidden benefit to a Raptors’ team sans Bargnani or Garbajosa. Without these two AP is going to have to take on more of a scoring role, something he’s showing that he’s certainly capable of doing. When he’s going from long-range and Juan Dixon has his mid-range game going like last night, it’s a case of pick your poison for opponents. And while we didn’t see Luke Jackson last night, I’m hoping he can provide some similar shooting help, especially from long range.

The award for worst performer of the game goes to Alonzo Mourning who finished with eight points, one rebound and two fouls. Booed mercilessly all night by the sold-out ACC faithful, Mourning decided to "sush" the crowd after making a basket to get Miami within 20 during the second quarter. I didn’t know whether to burst out laughing or gag after seeing him put the finger to his lips and if Toronto meats Miami in the playoffs this year, I’m hoping the ACC folks have saved his antics in their archives to play each time Toronto starts racking up a big lead.

My MVP in last night’s win however has to be Sam Mitchell and his staff. Talk about having your team prepared! Without Wade Miami has no consistent threat off the dribble to get to the rim (the team shot 20 free throws however Shaq had nine of those himself) and Mitchell’s defensive game-plan exposed this by forcing the Heat to become a jump-shooting club. The Heat in fact volunteered to keep hoisting them up which may explain why both Eddie Jones and Jason Williams had as many field goal attempts as Shaq.

In addition, I’m not really sure how you can be a fan of this Miami club unless you are a huge Shaq or D-Wade fan. Jason Williams still plays like he’s in a rec-league somewhere, Alonzo Mourning might be the biggest baby about calls in the league for someone who’s supposed to be such a "warrior," Dorell Wright? – yikes, so much for the second coming of T-Mac...and don’t even get me started on Antoine Walker!

Anthony Parker tearing a rebound away from the listless former "Employee Number Eight" last night had to be my highlight of the game as it simply showed just how much more passionate this Toronto club was about getting their 39th victory. Yes win number 39, which passed my expected win total of 38 victories going into this season and now has Toronto back in third place in the Eastern Conference.

If Toronto can retain this position and Washington stays ahead of Miami then we’ll indeed see a first-round match between the Raptors and Heat. Word is that Wade is practicing again but it’s no certainty that he’ll be able to return to the court, let alone be able to compete at his upper echelon level of play considering his shoulder injury which will at some point probably require surgery.

If Wade returns, perhaps these "complementary" players will fall back into the roles that made them so successful in last spring’s championship run. With the inside/outside game of Shaq and Wade the Heat are indeed one of the league’s most dangerous teams.

However for now I’m not convinced and I’d welcome them as a first-round opponent as opposed to the Pistons or Bulls. Shaq simply isn’t the presence he once was and this club will have to rely more on Wade this year than even last when he almost single-handedly captured the title for them.

The names on the back of the jersey’s may look impressive, but right now they’re sort of like images of a doctored-up "Donald" billboard – hard to tell if it’s the real deal or not.