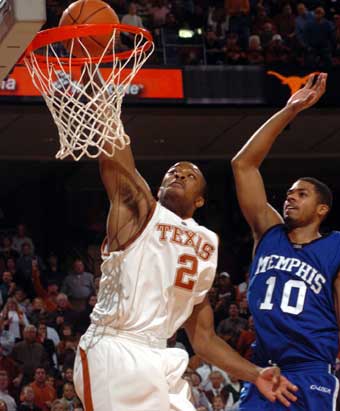 For some reason I don’t think Bryan Colangelo gets much sleep.

In fact I can picture him laying in bed at night and pondering:

With the Raptors looking to improve upon their third place standing in the East and address the loss of Andrea Bargnani, the team has decided to part ways with second round pick PJ Tucker and sign former Cavs’ first round-pick Luke Jackson.

Selected 10th overall by the Cavs in 2004, Jackson was somewhat of an unexpected pick at the time. While he drew comparisons to the likes of Brent Barry due to his shooting skills, scouts wondered about his athleticism and many believed he’d drop out of the lottery and be a mid to late first-round pick. However his pre-draft workouts surprised many as he tested out well athletically and the Cavs grabbed him only two picks after the Raptors grabbed Rafael Araujo. (Interestingly, the Raptors now have had four players from the 2004 draft – Hoffa, and currently Pape Sow, Kris Humphries and Jackson.) Unfortunately Jackson never got to show the Cavs, or the rest of the NBA for that matter, what he could do. He played only 46 games through his first two seasons due to injury, and eventually found himself contractless after being cut from the Celtics’ training camp earlier this season.

However his solid play with the NBDL’s Idaho Stampede has given him another shot in the League and the former Oregon star (whose alma mater fell to Florida barring them entry into the NCAA’s final four yesterday) might be a great fit for Toronto.

Jackson shot 48.6 per cent from beyond the arc with the Stampede and has averaged 14.6 points, 4.5 rebounds and 3.9 assists. The interesting thing about Jackson is that he’s not just a great long-range bomber as many believe. He’s also a solid all-around contributor in terms of his passing and rebounding (as his D-League numbers attest) and is deceivingly athletic. It remains to be seen if the injuries that marred his previous two seasons have robbed him of some of his natural abilities but he should get a shot to show his stuff with the undermanned Raptors who Denver game aside, could probably use a boost from long-range.

Which brings us to PJ Tucker.

Tucker’s "dismissal" is a topic that brings about mixed emotions for us here at RaptorsHQ. While we didn’t view Tucker as a terrible choice in the second round, we were lobbying hard for Colangelo to select Paul Milsap, Leon Powe, or even Bobby Jones or Hassan Adams. All four look like they would have been better picks right now, especially considering the needs of the club.

However Tucker played well in the preseason and looked like eventually he might be able to fit a niche with the Raptors, especially due to his rebounding and work ethic. As an undersized 4, if Tucker was able to work on his offensive skill-set facing the basket, he seemed like a good rotational option down the road.

Unfortunately from all the reports we’ve received, he wasn’t progressing as the Raptors would have liked. His averages of 10.7 points and 3.37 rebounds with the Colorado 14ers in the Developmental League are underwhelming and he simply wasn’t standing out the way we expected considering his career at Texas. That being said I am wondering if Colangelo would have been more patient with PJ had the Raptors not experienced this recent rash of injuries.

The most disappointing thing about the cut from our perspective, was its timing. After months of scheduling issues and back and forth with Tucker’s agent, on Friday we had finally received confirmation that PJ was able to do an interview with us last night. We had been working on this since December and were extremely excited to give our readers some insight into the world of the NBA’s developmental league and the interview was supposed to be a monthly piece with Tucker entitled "Tales from the D League." Instead, 24 hours before the interview, Tucker was released of his contractual obligations. Hopefully we’ll still get an opportunity to chat with Tucker in the future and all of us here at the HQ wish him the best. I still think he’ll find his way back to the NBA and I wouldn’t be surprised to see the Raptors extend a training camp invite to him next season.

I’m also going to say that I wouldn’t be surprised if Colangelo takes a look at a few other players prior to the end of the season. While Jackson seems to be an apt replacement for Andrea Bargnani, I’m wondering if a slashing-type wing player wouldn’t be a better option for the remainder of the season if Mo Pete has his long-range stroke back and Anthony Parker is healthy. Someone who might fit that mold - Denham Brown, the D League’s seventh leading scorer averaging 18.6 points and 5.4 rebounds per game.

One player who the Raptors won’t be testing out is Randolph Morris. Last week I discussed that Randolph might be a cheap option in terms of getting help on the glass and apparently B.C. agreed but was outbid by Isiah Thomas for his services. In other prospect related news, no updates to our top five this week. Derrick Byars and his Vanderbilt team were robbed of a potential Final 8 match with North Carolina thanks to a non-call on Jeff Green’s game-winning shot (replays showed he clearly changed pivot feet) however Byars led his squad with 17 points including some clutch ones down the stretch.

Ron Lewis, our number three prospect as of now, put on another superb offensive performance finishing with 22 points and six rebounds in Ohio State’s win over Memphis. With the Final Four lineup set now for this weekend, we’ll be keeping a close eye on Lewis to see if he can propel his Buckeyes towards a national title.

Turning back to the Raptors, Toronto takes on the Boston Celtics tonight in an Atlantic Division match-up. Even with Paul Pierce a possible scratch and Anthony Parker and Chris Bosh looking to be ok to go, the Celtics always give the Raptors a good run and Toronto can’t fall asleep this evening.

I’ll be looking to see a dominant follow-up to Friday night’s lambasting of the Nuggets and the Raptors to exert their will offensively on the Celtics. Jorge Garbajosa is tonight’s X Factor once again as he’ll probably draw some of the assignment of guarding Paul Pierce if Pierce plays and he’ll also be counted on offensively. If Garbs starts knocking down his shots early, this opens things up for TJ and CB4 and could mean a long night for the C’s.

George Karl stated after Denver’s loss Friday night that the Raptors "were the most talented team in the East..." and I’ll be looking to see another example of this with a solid win tonight before moving on to face Miami on Wednesday.